The Routine of Tourist-Cyclist Clashes on the Brooklyn Bridge

The Merriam-Webster online dictionary defines a tourist as “One that makes a tour for pleasure or culture.” As per the Wikipedia, the World Tourism Organization describes tourists as people who “Travel to and stay in places outside their usual environment for more than twenty-four (24) hours and not more than one consecutive year for leisure, business and other purposes not related to the exercise of an activity remunerated from within the place visited.” Well that’s way too thick and it sounds like a courtroom statement.

So here’s my own friendly definition of a tourist: “Non-gender nor race-specific specimen of humankind who, having committed a voluntary act of displacement from a familiar 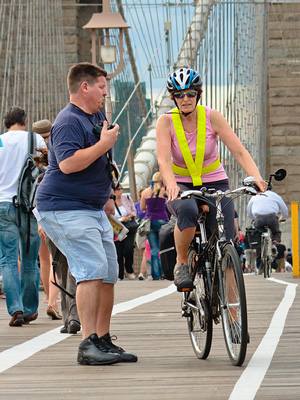 All right, now that I got half of you laughing out loud and the rest outraged, let me explain a few things. First, I spent some twenty years of my life working in the tourism industry. I have seen, and sometimes, done it all. Second, I distinguish between a tourist and a traveler. Which kind are you? Third, this is my blog and I am allowed a rant.

The need to write this post was probably born long ago on a Cayman Islands reef, as I watched a panicked male diver extricate a souvenir branch of fire coral he’d hidden in the front of his swimsuit. Or maybe it was back on a steep slope near the southern bank of the Golden Gate Bridge as I noticed a camera tumble down past me, then a kid tumble down after the camera, and finally a mother after the kid. Or was it on a beach in the Grenadine Islands where French tourists took naps against the trunk of poisonous Manchineel trees because the skull and bones warning signs were in English.

But that need has recently been exacerbated by my round-trip passage on the Brooklyn Bridge, across which I run every other day to my Manhattan loop. For some cosmic reason, it would seem that the magnificent old structure somehow deepens a tourist’s dismay to the point of apparent brain damage. Of course, the scene is further complicated by the presence of a few cyclists – another species with behavioral issues, but theirs are more geared towards arrogance and recklessness. One thing is for sure, tourists and cyclists do not a happy crowd make. 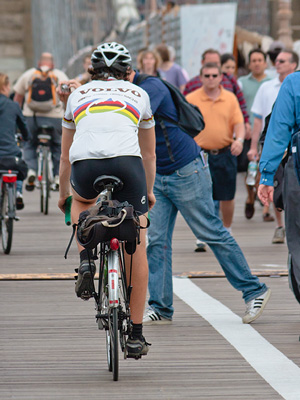 There is a white dividing line painted in the middle of the path and the occasional bicycle or pedestrian icon. (Until a few weeks ago, the line was so worn out that both sides were equal. It has just been repainted to the pedestrians’ advantage, allowing for a narrow safe space on the outside of the bike lane so that people can actually cross over and take pictures on that side too.) The proportion of wheels against feet is maybe one in twenty, if that. Yet some arrogant biking idiots come charging in, faster even than they would ride on the street, whistle in foaming mouth, like they own the world, and they force their way through the bridge, blowing hard and loud, shouting and cursing at everything that gets in their way. Rush hour is the worst, people are getting off work and headed home on their bike. Some New Yorkers can obviously be as ridiculous on two wheels as they are on four.

The pedestrians, mostly tourists, are just clueless. The posted signs explaining this non-enforced, theoretical division between transport modes are small and the painted ones are wearing out. Having a camera in their hand, these people become oblivious to the world around them. Tunnel vision sets in and everything outside of a direct line through the viewfinder or LCD, past the significant other posing extravagantly, and all the way to a poorly framed famous landmark, instantly vanishes. How many times have I run past such photographer, cutting through the scene because I have no other choice, with no one behind or in front of me for at least 20 meters, and had the flash fire straight in my face.

There are very few moments more precious than witnessing the confused facial expression of a family man stepping onto the bridge (or near any other landmark), his entourage in tow, children darting in all dangerous directions, control lacking, senses overwhelmed, ego bargaining with the brain to remain in command, camera half-raised towards a scene but the gesture voided by complexity, tunnel vision setting in, an ear distracted by a police siren, an eye caught by a young and rather bare pair of legs walking by, a bead of sweat splashing on the LCD, and still he turns to his wife and begins lecturing about the bridge’s construction date that he just read in the guide book, standing smack in the middle of the bike lane as a biker approaches at warp speed. If you are a Sergio Leone fan like me, you just want to go to him and say: “Duck, you sucker!”

And then there are the ambulant drink sellers. Banking on the summer’s great heat and the omnipresence of tourists, they try to make a killing in a few months, selling à la tête du client and ripping off as many customers as they can. One day, in my runner’s outfit – which instantly classifies me as a local – I bought a bottle of water for a dollar at one of the Brooklyn side vendors. He told me all his drinks were one dollar. “Ok,” I said, “that’s good to know.” About a week later, I went back in normal, tourist-like clothes, a camera in hand. I wanted a coke. The guy was talking on his cell phone. “Two-fifty,” he muttered without hanging up or greeting me. I left.

So who is to blame? Nobody in particular, as always. The secret is in the respect and tolerance towards those we don’t understand. We still haven’t managed to stop wars and genocides but maybe we can get tourists on foot and New Yorkers on wheels to coexist peacefully on the Brooklyn Bridge. It would be quite an achievement. 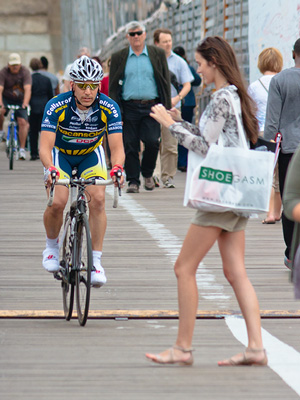 Tourists: Don’t be! Instead, become travelers. The difference is in the purpose. A tourist’s wandering is aimless. A traveler’s is meaningful. When going from A to B, keep track of your progress, remain aware of your environment, be curious and smart at the same time, learn, be modest, respectful of local culture and customs, fight tunnel vision, always know what’s behind you, learn how to read a map, go off the beaten track, explore intelligently, don’t let your camera hypnotize you, don’t behave like a sheep, don’t do anything you wouldn’t do at home, don’t litter, be aware, enjoy.

Cyclists: Don’t behave like you own the path, you don’t. It is a courtesy extended to you in a city that not so long ago, didn’t even care about bikes. Let the world get used to you, then you can prevail. Slow down. This is not a race track and pedestrians are not targets. You are still the most vulnerable element in the pedestrian-bicycle-car equation. Be polite. Nobody cares if you had a bad day at work, don’t take it out on tourists, you will be one some day too. Use a whistle for emergencies, not to draw attention to you all the way across the bridge. You are a minority up there, be happy you even get a lane. Negotiate your passage with skill and safety, rather than force and negligence. Anticipate. Smile. You’re on camera. 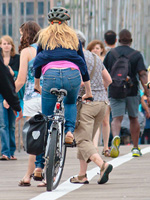