It’s all over the news, so I will try to be brief. The Gowanus Canal, for the un-initiated, is one of the worst scars on the Borough of Brooklyn.

Roughly a mile-and-a-half long, the canal is contaminated by sewage and leakage of toxic substances, a legacy of the past. Its waters are almost solid and completely opaque, rather disgusting at all times.

How a dolphin could manage to even wander in there puzzles me as much as the beaching of whales. Most likely, this is not dolphin error, but then again. However smart dolphins can be – and they are incredibly smart, I happen to have witnessed it first hand – some individuals can probably also be as dumb as a few specimens of my own species.

So this common dolphin swam up the canal. Was first spotted early this morning. Seemed to be in trouble, barely moving, as deep into the shallow canal and away from its mouth as can be. Stuck behind some pipes of unknown depth but eventually moving around the width of the canal. It was breathing, did not seem injured, but its behavior was as atypical as possible. That’s what I gather from the buzz, anyway.

It was there all day. So was a crowd of increasingly concerned passers-by. TV trucks and their crew were everywhere, telescopic antennae rising to reach national coverage. New York State Parks rangers and other official agency staff are reported to have been spotted on the scene. Various other agencies and organizations might have dispatched a few pieces.

It seems those who knew decided to wait for the 7 PM high tide to see if the animal would free itself. Mind you, we are talking about a dolphin in obvious distress, miles away from open water, struggling in the thickest sludge you have ever seen, the most contaminated environment NYC has to offer a marine mammal. How about waiting to see if the animal has assimilated Japanese culture and will commit ritual seppuku? 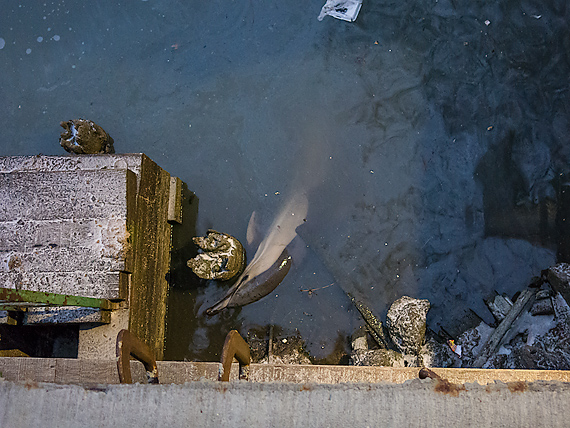 Around 5:30 PM, the poor dolphin is wedged against the shore but breathing and moving

Still, they waited. The crowds came and went. The TV anchors were, well, anchored. Cops took turns on the scene and by the time I got there, right after sunset, snow was falling hard and the NYPD was getting moody because of frozen fingers. It’s very hard to draw a gun at a crowd of animal loving bystanders with frozen fingers.

A huge, black, jacked up SUV stopped in the middle of the bridge, dark windows rolled down just enough to let out rap so loud it was shaking the road. Then the music was muted, the driver’s window lowered all the way, and I caught a glimpse of gold chains below synthetic hood fur. The African American man addressing me was nearly as big as his car. I held my breath. Then he said in a very little voice: “Is the dolphin still there?”

By 6 or 6:30 PM, I was leaning over a bridge railing and happened to see wild thrashing in the shallow water where the dolphin had wedged itself near the shore. People were looking down, shouting encouragement and playing dolphin sounds out of iPods. Soon thereafter, the NYPD started roping off that side of the bridge.

More honest people walked in wanting to see the star of the show. As always when the news get out, opportunists also arrived. The NYPD barked at them to get off the sidewalk and cross to the other side of the bridge. One female cop sounded like she was about to shoot, obviously confusing this with a crime scene. TV crews came to life, spotlights were lit up and anchors were lifted from their coffee cups. Wow, I thought, they have to make the six o’clock news.

As it turns out, it was past 6 PM and the poor dolphin had just died. A long-haired specialist of indeterminate sex wearing a red jacket with marine mammal and turtle rescue pedigree in the back was allowed through the police tape. Looked over the edge. Whipped a cell phone out and reported. At the time I thought, well, somebody actually cares about the poor thing. But they were probably arranging for an autopsy. Cool, a common dolphin injected with Gowanus gel. Let’s find out how they absorb it. 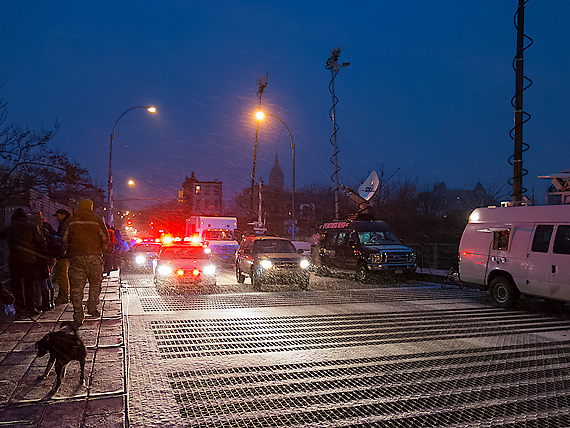 Now don’t get me wrong. I’m not over-dramatizing this, even though I feel so incredibly sad right now. Granted I have strong dolphin ties, having, err, interacted with crazy Jojo the Dolphin in Turks and Caicos, and then the endearing, playful, independent and very smart Spot in Little Cayman. However I do understand the rules of natural selection. The weakest are eliminated so that the race will move forward. Mistakes are made, accidents happen.

But at the same time, I overheard two informed people discussing the issue on a sidewalk. A member of some animal rescue organization, he was dismissively saying to her: “We spend fortunes on rescue attempts for a single animal, meanwhile the species is becoming extinct.”  Well sir, if I may, you have chosen the wrong field. Try professional gambling or dealing weapons, it might suit you better. How on earth can we help the species if we don’t focus on individual cases and raise the public’s awareness?

The bottom line is, I know that I know nothing. Yet today we could have come together, as a city, to try and save one of the smartest, friendliest, most endearing animals on this planet, possibly a victim – as if we needed extra coaxing – of our very own pollution efforts. We did not, nor did we even try. We reported on it. We watched. We commented. We pointed. We blocked off sidewalks. We harassed passers-by. We blogged. But as far as I know, no rescue was ever attempted.

All we had to do is bring a raft. Get a bit wet. You guys know the drill better than I do. Yeah, it was freezing. So what. Many dolphins die out there far offshore in the nets of floating tuna factories. This one was right here, at home, close enough to touch, real enough to mesmerize the imagination of children city-wide. What a statement it would have been, regardless of the outcome.