A Drive Up Chapman’s Peak

A picturesque, cliff-side road leading south from Hout Bay to Noordhoek and then either Fish Hoek or Kommetjie, Chapman’s Peak Drive (Chappies for the locals)  is aerial and exposed. To circumvent Chapman’s Peak, an extension of the Constantiaberg, the drive was carved right into the mountainside, high above the shiny waters of the Atlantic Ocean. Frequent rock falls have yielded the need for advanced protective engineering and entire sections of the slope above the road have been secured with a metal mesh and cemented.

But mother nature often laughs at our efforts, and between our summer visit – during which these shots were taken – and the winter one, severe downpour caused landslides all over Table Mountain and the drive was closed for days. 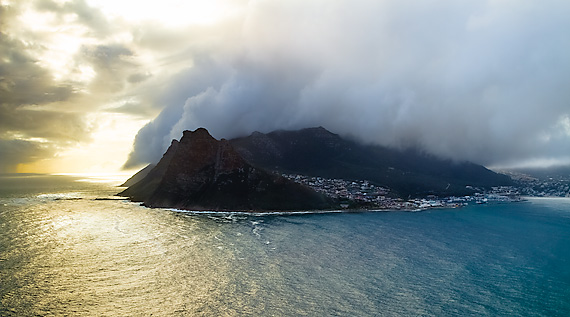 These are the same painful climbs I struggled through in high winds a few years ago on training rides and the following Cape Argus Cycle Tour I did with Henri. The view is superb, but while the road was obviously closed to traffic during the Argus, many cyclists take it daily and it is a tricky place where gusting wind and cars make for a very real threat.

And as if it was not enough, the weather, as seen below, can be really moody around the cape. But what an eerie drive!