today I don’t even wait 3 minutes. (Bush hour is the bus-rush hour, in case anybody wondered) ;-)

8:04 – #257 Express to Horseshoe Bay is here. Few people are onboard the double-length bus. Once across the Lion’s Gate Bridge and having paused at Park Royal, it’ll be non-stop until our destination.

8:45 – Arrival in the cute little coastal town of Horseshoe Bay, northern Vancouver BC Ferries terminal. The town is shyly tucked away between the mountains and the sea, and the famous Sewell’s Marina itself rests behind an outcropping of rock that only opens up to the north. Howe Sound extends from here northward to Squamish. To the west is Bowen Island. High above and to the east are Black Mountain and Hollyburn, and the ski resort of Cypress Mountain. 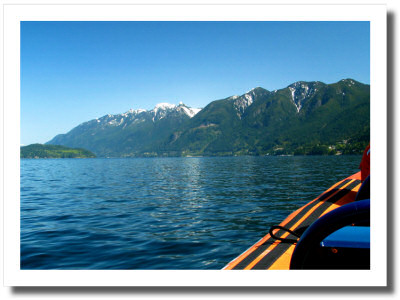 9:30 – After drinking the ritual morning coffee watching sea birds, I check-in with the tour office and receive a bright orange full survival suit. This morning is already comfortably warm but the water remains cold and the suit won’t be superfluous as a protection against wind and splashes once we’re out on open seas. Besides, it makes us look cool.

10:00 – Along with 10 other brave and daring tourists, I embark a 28 foot rigid hull inflatable boat after the skipper has given us the ritual "boat talk". On the program, a 2 hour long eco-tour of Howe Sound and the Strait of Georgia.

Leaving the marina, the skipper heads north along the coast, following the Sea to Sky Highway that leads to Whistler. I soon spot a few seal heads pocking through the calm surface but since the skipper hasn’t said a word, I assume there are many more to come and keep the camera hidden inside the suit.

He describes the scenery during short breaks between which he keeps the boat on plane at what seems to be close to full speed. We spot many species of birds including Harlequin Ducks, Cormorants and a few Bald Eagles. 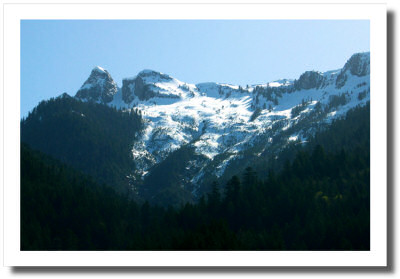 The north face of the Lions appears high above us and reveals a spectacular hiking opportunity. I get very excited and decide to come back in July when the snow will have melted.

Then it’s Mount Garibaldi’s turn to appear in the distance, northern most volcano in the Cascades, even though it doesn’t officially belong to that range.

I had guessed right about the seals. We soon cruise by a few small rocky islands and shoals on which is resting an entire colony of Harbour Seals. They seem to tolerate our noisy presence with indulgent annoyance. We do the tourist thing and shoot wildly. With our cameras, of course. Seals are a bit of a touchy subject when it comes to shooting. Shoot! I goofed.

The tour then takes us west and into the Strait of Georgia, around Bowen Island and south to Point Atkinson and its lighthouse. On the way back north, I recognize Eagle Harbour. The very steep shoreline is lined up with the most amazing display of outrageous wealth. I ask the guide how much the houses we see sell for. "Oh, five to ten or twelve millions, he says. Some go for more." 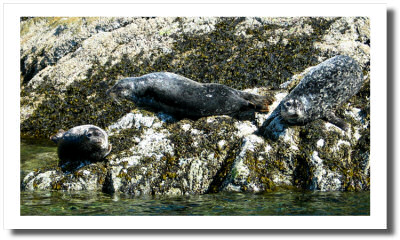 I stay silent. What could one reply to that? It’s more money than my entire genealogy has ever owned, adding all my ancestors together from my parents and grand-parents to the first prehistoric man my presence here could be traced to.

12:00 – The skipper docks the boat back into its slip at the marina. It had been chilly offshore but the warm sun immediately takes over and the suits drop. To bad for cool looks, cool smells are even more important. We are probably headed today for the season’s warmest temperatures; it’s a glorious day. This stamp is worth many more. And today, B.C. has justified its flag.

13:30 – After indulging myself with yet another coffee at a terrace, I catch the express bus back to Park Royal where I transfer to #236 bound for Capilano and Grouse, still on the tourist trail.

14:30 – Capilano Suspension Bridge is quite crowded today. But they have the best stamp system I have seen so far, forcing you to actually run around the compound and stamp a map yourself in seven different spots. I get a good laugh at the faces of people carefully walking across the swaying 170 meter long bridge, 70 meters above the Capilano river.

17:00 – I’m back in town after crossing the Burrard Inlet on the SeaBus. I drop by the Tourism Office and the Convention Centre to collect a couple more stamps and slowly head back home. Now I have some writing to do… 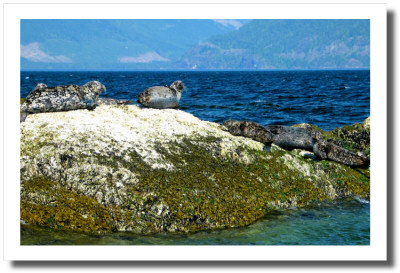 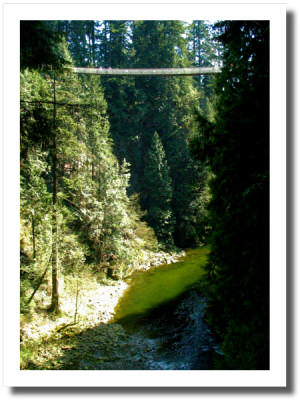 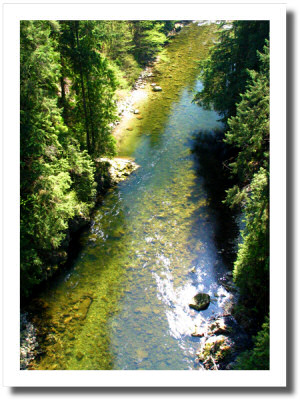 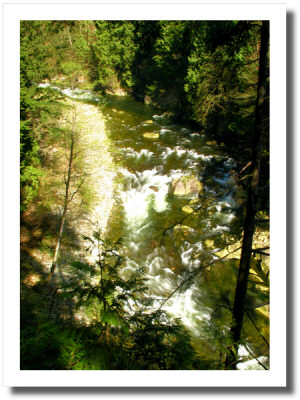