Ok, this has become more than a hobby, I now feel under a pseudo-scientific obligation to document the whereabouts of those absolutely adorable creatures. 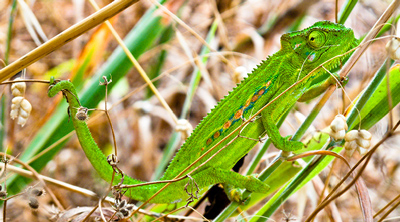 We’ve finally found Cape Dwarf Chameleons in a different area, much closer to the house, which lets us hope they might some day come back to the garden – even though we suspect there could be too many carnivorous birds around the house to allow chameleons to move back in.

They seem to favour the bright green livery no matter what they stand on and I’ve only seen a few individuals choose a darker shade of green while holding on to a higher branch with less leaves. I’ve still got to find one in full tones of brown.

The way their eyes move is fascinating; the entire eye socket can pivot in a full 180 degree motion, obviously independently. No actual feeding observed yet, but I wonder how much our presence alters their behaviour. The chameleons certainly don’t like the proximity of a camera. I’ve stopped taking close-ups and now shoot with the camera on macro but fully zoomed in, which gives me an actual distance of a foot or two to the subject.

They seem to prefer the sunny side of the little trees they hide in, but that could be very subjective. There is no way to keep our observation rigorous unless we are going to seriously track individuals on an hourly and then daily basis, which we can’t afford to do unless we put a serious dent into our other casual activities like sleeping, running and dining…

But I’m having fun and the chameleon quest helps me forget about pity issues such as global warming or the FIFA ticket sales.

Here are more pictures, probably the last, but also the cutest… 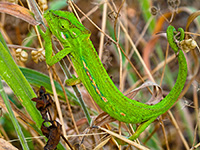 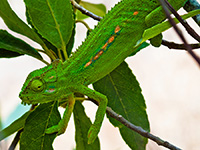