New York, On the road, Photoblogs

When possible, escaping the city for a few days is revitalizing, as in “vital”. It restores perspective and calms nerves down. Having graciously been invited to do just that, we caught a bus at New York’s Port Authority Terminal and rode west for two hours, crossing three state lines along the way. Leaving the city, our coach plunged into New Jersey, hooked north back into the State of New York, then drifted south again to Port 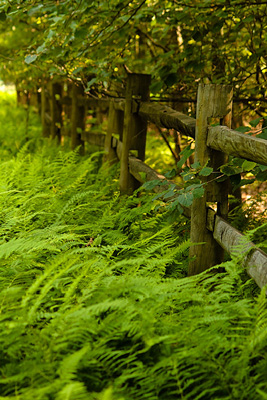 Jervis where it crossed the Delaware River into Pennsylvania. We were picked up by our good friends Ellen and Michael in Milford and driven into the nearby Shohola woods where they live half of the week.

With a long weekend ahead of us, we felt like an eternity was ours to spend leisurely, i.e. doing nothing, but we kept our priorities straight and first took G&T’s to the lake a few hundred yards away, for a cool-off swim. Thanks to an ancient – brilliant – decision by the community of land owners, the lake has been kept motor-free and not only is clean, but quiet!

Late in the evening, after a chicken and boerewors dinner, I walked back to the lake in complete darkness, to marvel at the stars. The sky was clear apart from a low cloud line on the western horizon. Weather-wise, we thought we had it made.

But sometime during the night, a cold front caught up with a warm one and colliding, they became stationary; the air mass’ mood changed to stormy and it started pouring, thunder rolling all around and lightning sparking the night up. It rained all night, and all day on Sunday, to the great disappointment of all those who had planned a 4th of July barbecue. But rain in the woods is magical. It makes the air so thick with moisture and smells that it becomes visible. The vegetation, already lush, starts to shine and comes alive. And 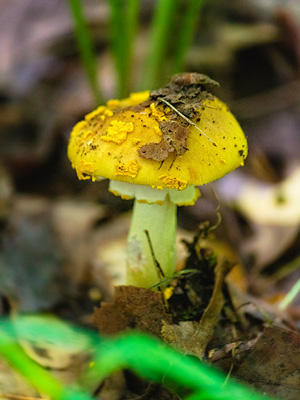 the sound of rain drops through the trees is like a long melody, soft and melancholic.

We adjusted to plan B and relocated the 20 people party inside, and I took quite a few amphibious walks in the rain, looking for mushrooms and the brightly colored orange salamanders I had been told could sometimes be found near the road.

In a region where the number of deer almost matches that of ticks, where elephant-sized wild turkeys roam in herds and where our hosts showed us bear paw prints on the house’s walls, it was still the small stuff that captured my attention.

Mushrooms were everywhere in the humid, mossy, deeply shaded woods. Some like the Black Trumpets were edible and ended up in the evening salad and the morning omelet. Others that I remembered so well from my childhood, the colorful Death Caps and Fly Amanitas, amanites phalloïdes et tue-mouche, were admired from a respectful distance. 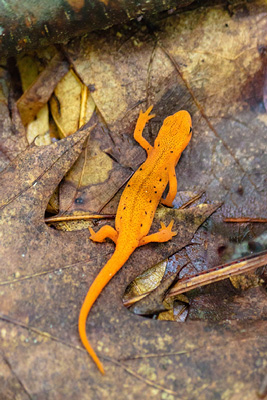 It took me three days to find my first salamander specimen, but then there were three more within a few feet. That was Monday and I snapped a few shots very fast because we had to hit the road back to civilization.

The gill-less orange salamander is called a Red Spotted Newt. Despite its lizard looks, it is an amphibian like frogs; while larvae and adults are aquatic, the efts, or “teens”, are terrestrial and favor damp woodland with plenty of leaf cover. The tough little things can live up to twenty years but will only be land-based and brightly colored for the first three to five, after which they go back to the water and lose most of their color. Newts are rather cool: like pigeons, they can “home” using magnetic orientation. They breathe through their skin. And as it is often the case with brightly colored animals, that color is a warning: their skin secretes toxins which help keep predators away.

By the end of

Sunday, as the party was coasting, the rain finally gave up. Marie and I escaped to the lake where Mother Nature treated us with her own brilliant display of soft sunset fireworks. It was the apotheosis. The next day, we’d be going home to a hungry, lonely black cat. We hoped the large rounded timer-controlled feeder would have worked this time. The cat loves it. He calls it his god feeder. I think he’s confusing it with Marlon Brando. 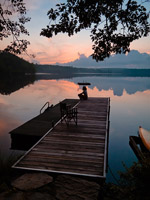 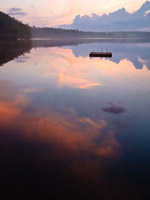 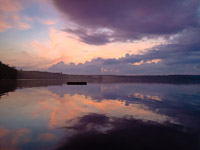 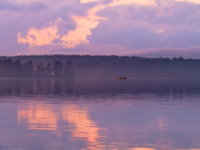 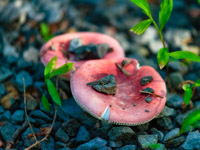 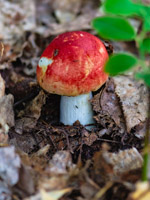 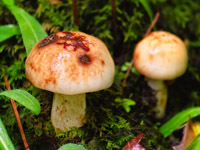 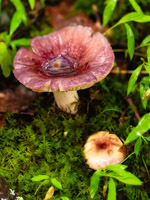 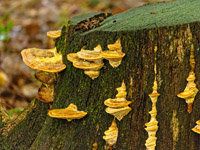