New York, On the road, Photoblogs

We rented a Zipcar one Sunday, despite my aversion for the company. It was a day after my long run and I was given first choice on our ultimate Long Island destination as a recovery favor. I had never been to Montauk, knew it was the farthest point on Long Island, had read about harbour seals being spotted at times, and decided to go for it.

We first drove to the North Fork, where we had been before and whose beaches are pristine and deserted. We found an empty stretch of shoreline, turquoise water and peace.

But I wanted to see it all and we pushed on, caught two ferries, met an old Union Square farmers market friend of Marie’s along the way, and drove to the very tip of the peninsula.

My hopes were short-lived. We had arrived in tourist land, next to a lighthouse painted nasty brown, with murky waters all around and nowhere to be alone. I learned two lessons. Always trust a bokkie’s instinct. And when you find some place nice, stay there as long as you can. Murphy always lurks around the next corner. 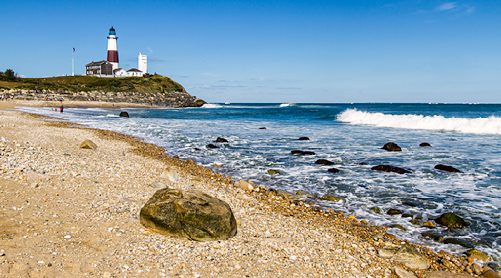 Next time, we will stay on the North Fork. There is a touch of Little Cayman, there.