Against all odds, an ascent to the Empire State Building Observatory
Photoblogs

After a nightmarish summer working bizarre shifts in a futile attempt at managing mad crowds and the absolute stillness of union employees, I left the Empire State Building Observatory almost four years ago with the firm intention of never going back.

Yet when my current workplace shifted from the Financial District and its blood-thirsty bankers to the bloody tourists of Mid-Town – in other words from ticks to fleas – I eventually decided that, against all odds, I would have to “go back”. 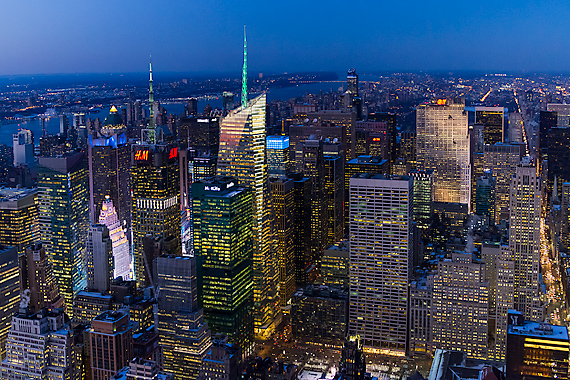 Marie and I went up on a winter afternoon, late, after work, a cold sun breaching the horizon while we ascended. There were no crowds but going from street level to the main observation deck on the 86th floor took almost an hour. Marie rolled unbelieving eyes as we were funneled, directed, ushered, moved, instructed, ignored and waved in by red coats with the utter detachment that only a steel collective agreement confers.

We were spat out by the main elevator bank unto the 80th floor. From there, the building tapering into a needle, we had to switch to a different set of cars, two of them only, running to the main deck. Well, we thought, 86 outta 101 ain’t bad. Our tenant ticket to 86 was a bargain, a full-featured ride to the 101 nest can run one up to $50.

Outside temperatures well below freezing and aggravated by the bite of a 1000 ft ASL wind, we did what everyone does. We buttoned in, zipped up and pulled our hats way down. Then we walked out on the deck and spent a bit under a half-hour shooting at arm’s length, through the fence, fighting for real estate with Japanese conquerors and Russian czars, getting colder and colder, and the retreat was brief.

Below is what one of the most frantic cities on the planet looks like from the skies. It is quite stunning. It’ s dizzying. It’s mesmerizing. And most of all, when one lives there and is headed back down to the ant nest, it is incredibly stressful.

So here I am, dealing with high hand-held ISO and unavoidable noise, crooked horizons and wide-angle lens distortion. I am seeking an HDR look despite the lack of tonal contrast, as mid-tones and excessive detail seem to be the only way to paint such a madly exaggerated city.