A couple of months ago, walking home from the subway with a hook towards Whole Foods, we came upon a gathering of people who stood on sidewalks, pointing up animatedly and aiming phones. At first I had thought they were looking at a plane but the object of their attention turned out to be a pair of large red-tailed hawks.

The birds appeared to be collecting little sticks from the top branches of a tree to build their nest, which they puzzlingly had elected to place on the street-facing fire escape of a three-story building. I don’t always get bird logic.

Then late last year, on an outing to Staten Island’s southern shore for which we had exceptionally grabbed a Zipcar, we stopped at the Princes Bay pier on the way back and were told by a man that there was an eagle in a tree under the lighthouse. My heart skipped a beat, instantly transported back to Vancouver.

The man vaguely pointed an arm and training my telephoto lens into the setting sun, I spotted the bird, a stone’s throw away from where we had unknowingly picnicked an hour earlier. We backtracked along the beach until we stood at the foot of the cliff right under the magnificent bird, secretly hoping he would take off and dazzle us, but he didn’t. 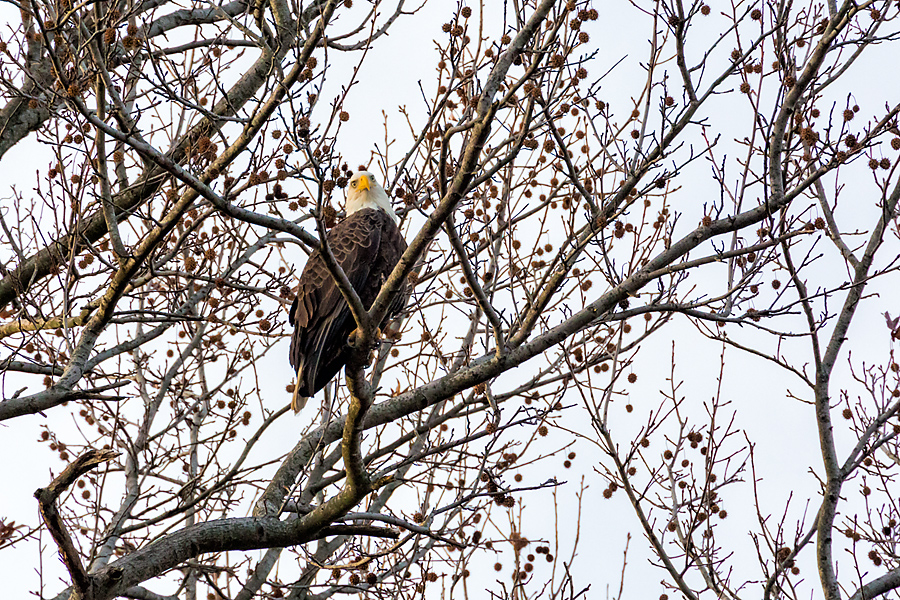 Still, pretty impressive feather count for such an urban environment.