Finding peace up at Grouse

It was the evening of Nov. 27th. A rare outflow of Arctic air from the continent had collided with incoming Pacific storms,

Earlier that day, I’d left the struggling valley behind and gone to my favorite spot on the North Shore, Lynn Canyon, which hadn’t disappointed me. The place was almost unrecognizable under its new soft white blanket, but every bit as beautiful as always.

I had then taken a chance and headed up to Grouse despite the completely overcast skies, still falling snow and failing light. The weather in Vancouver is well known for its last-minute, late-afternoon clearing and the forecast had been optimistic, so I was, too. 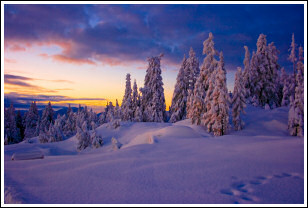 at the top in an almost empty, cold and dark gondola just before sunset time. The visibility was down to zero as the peak was literally in the clouds. From the exit of the Red Skyride bunker, I could barely see the huge wooden sculptures that sit next to the chalet, a mere hundred meters away.

But I had guessed right. As I walked around, amazed by the thickness of the clouds, a hint of yellow light began to appear above the station. All of a sudden, everything was possible. I got the camera out, and the rest is history. I think the pictures speak for themselves.

I was out for about 2 hours, from before sunset until way past it; from total cloudiness back to it; from a comfortable feeling of warmth to wet and cold feet, frozen pants up to my knees and painful fingers. But the camera never flinched, happily clicking away and hiding between shots inside the relative protection of my open fleece. The temperature wasn’t much below –9 C, and it even got warmer as time went by. But as opposed to the skiers and boarders

around me, I didn’t move a lot and spent most of my fun knee-deep in the snow, immobile, waiting.

Strangely, I felt, the whole time, as if I was actually re-doing something that had already been done. It wasn’t until I saw the pictures on a computer screen that I realized what it was: the great Samivel had been there before. Maybe not physically – his playground was the Alps – but in essence. Because mountains are mountains and their spirit travels across oceans, and know no boundaries.

I’d just been photographing what he had once painted. Or better, I had been part of it. I had walked inside one of his scenes, a tiny humble photographer trying hard to take pictures of a majestic giant landscape with a miniscule camera. I recognized the pastel tones, the simple lines, the soft curves, the peace all around me, the nostalgia. It was all there. I hope I did him justice.