It happens once a year on English Bay. It claims to be the largest 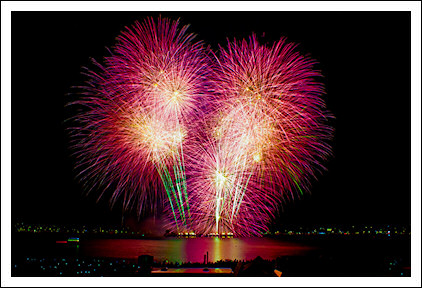 offshore display of its kind. It attracts 300,000 to 400,00 spectators a night, four times over two weeks. It is said to cost way over a million dollars to produce, a good share of which comes out of the city’s pockets – the same pockets that could be feeding and housing the homeless, by the way. As every popular event, it has defenders and detractors. It’s the Celebration of Light, Vancouver’s annual international fireworks competition.

The opening night, last week, was Canada’s own. The US followed with brio a few days later and then China raised the bar even higher. Our grand finale, tomorrow, featuring all three countries together, promises to be very interesting.

I was present for the first 3 nights, living literally across from the barges the fireworks are shot from. Each night, on Wednesdays and Saturdays, the neighborhood disappears under a massive human tide. Surrounding streets are closed off to traffic and as early as 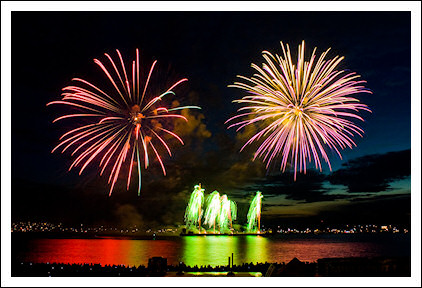 5 to 6 hours in advance, people are already camping on the beach and grassy slopes of English Bay to claim the spot they have decided will yield the best views of the show.

It’s a huge money maker of an event, or maybe a money spender. But if one manages to see beyond the dollar signs and the corporate smell of smoke, there remains an extraordinary show of creativity and wonder. I’ve always admired the mind of someone who simply yearns to fire colored rockets off into the sky, pondering how they will look from all directions and thinking spatially enough to design and animate an entire 3D sky on a tight timeline. He or she would have to be brilliant, and probably a bit nuts.

Wish you had been here…