There were a lot of very sad Brazilian students in the Vancouver streets today, after their team lost to France 0-1 in the FIFA World Cup. 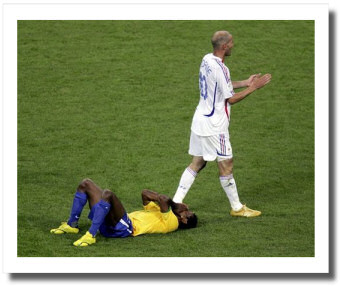 I’m not one to praise commercial sports too much, but still, as Numérobis would say, “Ça fait plaisir.” France advances to the semi-finals and will play against Portugal. They seem to have found a new rhythm and have definitely regained the full support of their fans. Good for them.

I totally enjoy the World Cup because it’s the one thing, with the Olympic Games, that the whole world watches and that hasn’t got anything to do with war or catastrophes. People are glued to their TVs all around the planet, no matter what time of the day, in bush villages, mountain pueblos, major cities and farms everywhere. Football is the one thing pretty much all races have in common, and as such it creates bonds and draws bridges.

I remember playing an improvised football game on an uneven and bare grazing field, on the Vanuatu island of Espiritu Santo, locals against crew members, barefoot, near a village that didn’t even have electricity. The locals spoke a few words of English, but those were not needed. The game is a language by itself.