Today was a day of celebration. 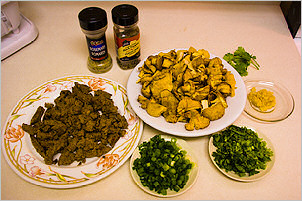 A giant sword, which had been shining of a cold metal glow across my neck, its razor-sharp edge inches of the flesh and dying to cut in, has finally been lifted. It had been years. I can breathe again.

So I decided to treat myself to a cheese fondue (and some broccoli, which I get by the truckload for a bargain price at Costco, to balance things out and even though they just don’t go together at all.) However, once inside the store’s giant walk-in fridge, my eyes were caught by a once familiar sight – freshly packaged, golden colored chanterelles. I’m probably related to Hobbits for my love of mushrooms. I had to give in. 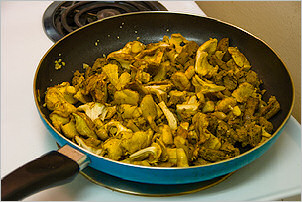 ow for the record, I can’t cook; nevertheless, I once in a while try and pretend. So I went back to my mentor’s blog and made sure I was up for the challenge. I wasn’t going to cook a ginger ale pig, nor would I be messing with shrimp. No. I was simply going to make myself a mushroom fricassée.

It would seem that a major part of the cooking process involves talking about and taking pictures of said process. I can live with that. It actually makes cooking fun. 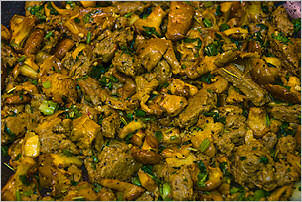 So I rounded up my ingredients and took a picture of them… After 33 shots of the ingredients, complete with white balance tests and multiple angles, I remembered I had come to cook. So I took a break and developed a few sunset pictures. Then I went back reluctantly to the kitchen.

My fricassée would revolve around 450 gr. of chanterelles, which I decided to combine with 3 diced portobello patties for the illusion of meat and to fill the pan. I added chopped green onions (the closest I had gotten to the chives I originally wanted) and cilantro (with which I usually replace parsley 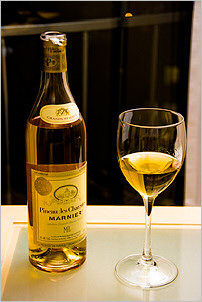 that I never liked), a lot of garlic – vampire ye be warned – and I shed a tear for not having fresh thyme. Somehow my instinct told me to stay away from wasabi. I’ve always wanted to put wasabi in something. Next time. Along with sweetened condensed milk, maybe.

So I browned the garlic while processing a few files, then threw the mushrooms in the pan – wondering why nobody’s ever come up with a pan brand named Peter – eventually followed by the greens as I burned a DVD, then a pinch of salt and pepper. This is hilarious, I almost sound like I knew what I was doing. ;-) I took more pictures and tried to send a text message but my phone’s battery was fried.

The smell rising from the pan was a delicious trip through time, back to the south of France, quand on allait aux champignons. Chanterelles and girolles grew in humid areas, under thick tree foliage and as kids, we took the collect

as seriously as the role games we played around them.

In the end my experiment came out ok, or at least the food didn’t walk out of the kitchen outraged. I had even bought a cake (!) and pour arroser ça, no Rust en Vrede Estate Blend 2000 but the closest thing available in BC to a Muscat de Provence: a bottle of Pineau des Charentes, sweet wine recommended as an aperitif but perfect for desert if you ask me.

Perfect, it almost was. If only I’d been cooking in Kamieskroon…