From Sea to Sky and in Between

On the road, Photoblogs, Vancouver

Leaving Vancouver behind and heading north along Howe Sound, one passes by Squamish at the northern end of

the sound and then arrives in Whistler, last stop on the road to Nowhere.

The town of Whistler is a small mountain resort in full bloom with a bright Olympic future. It is reached in about two hours via the Sea to Sky Highway 99 which starts in North Vancouver and follows the eastern shore of Howe Sound upwards.

The sound’s waters progressively turn a pale turquoise as the latitude increases, reminder of the glaciers ahead. When the water ends after Squamish, high mountains take over on both sides of the valley.

Whistler, 15,000 souls, is first, last and always a ski resort. The Blackcomb and Whistler mountains, culminating at 2284 and 2182 meters, 1600 meters above the station, offer some of the finest skiing in North America. They each have an hourly lift capacity of close to 30,000 skiers and over 100 runs, the longest being 11 km long. But the recent enthusiasm for all outdoor sports has turned the little town into a year-round success story and summer days remain busy with mountain bikers and hikers.

My friend Silvia and I were there on Monday, once again courtesy of the cool Landsea Tours. We caught the gondola and following chairlift to the Whistler Mountain peak for half the regular price as the ticket booth people were kind enough to honor our Tourism Challenge passes.

The view from up there is simply fantastic. I’ve posted a 360 degrees panoramic view of the surrounding summits in the pano gallery. Check it out! It felt incredibly good to be up in the mountains again.

After spotting a deer during the trip up, we were discussing the odds of seeing a bear on the way back as our gondola glided down the mountain. Signs at the station had been asking visitors to report bear sightings along with the appropriate tower number. I commented jokingly that the croissant I was eating with delight would still become airborn and suffer a quick death as I reached for the camera, should a bear appear below.

Sure enough, less than a minute later, I spotted a couple of black bears grazing by tower #37. The croissant flew to the floor as I grabbed the camera and frantically tried to take a picture of the animals. Wrong setting. And these gondolas are fast.

Well, the very bad shot in the slideshow (click on the first, or any image to view, as usual) bears witness – pardon the pun –

to our bear sighting and the consequent wasting of a croissant. ‘Doesn’t matter, I had 3 left.

I also looked unsuccessfully for a marmot everywhere – the town of Whistler having been named after their warning signal – , and didn’t even dare embark on the sacred quest for the elusive mountain stream crayfish. Some will wonder. Bee would laugh. Yeah, we have a long history, the crayfish and I. 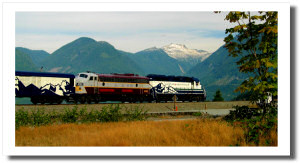 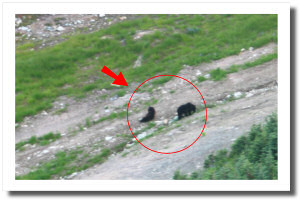 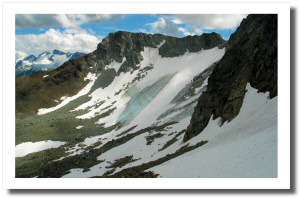