Getting bent for the Brooklyn Bridge

Fellow divers, did you know that the first people to get bent were not divers but bridge builders? You see, decompression sickness (DCS) – also labeled decompression illness (DCI) when diagnosed and treated on a common ground with the similar arterial gas embolism, was actually born under the name of "Caisson Disease" and although it involved pressure and the surrounding water, 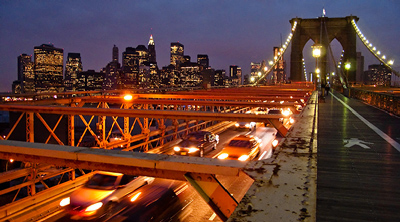 its unlucky victims certainly never saw little fishies. They were building a bridge.

Their task was digging to anchor the foundations of the future Brooklyn Bridge towers into the bottom of the East River, incarcerated for hours below the surface in enormous watertight pressurized caissons. Their average progress rate on a hopeful descent towards firm bedrock was a mere 6 inches a week. It was the end of the 19th century. Crossing the bridge would later cost 5 cents.

DCS, also called the bends, can be described as the formation of air bubbles inside the body following depressurization. Recreational and commercial divers are thoroughly familiar with the risks associated with pressure changes, but theoretically, DCS can also affect someone flying in an unpressurized aircraft and astronauts – the latter probably being more than happy to assume this slight risk in exchange for space walks…

When it was opened, the Brooklyn Bridge was the longest suspension bridge in the Wild Wide World. Today it is just the longest bridge to be called Brooklyn. Was it worth dying for?

In the case of the Brooklyn Bridge construction, at least three men died of DCS; but records were poorly kept and other casualties might easily have gone unnoticed. Washington Roebbling, the mastermind behind the project left in charge after his father’s early passing, was struck himself and left incapacitated. He finished supervising the 13 year-long process from his house, his wife insuring the liaison with the engineers.

When it was opened, the Brooklyn Bridge was the longest suspension bridge in the whole Wild Wide World. Today it is just the longest bridge to be called Brooklyn. Was it worth dying for? Not unless you’re a visionary – and these workers most certainly weren’t, quite the opposite. Their vision must have been that of bread on a cheap table, period. But because of their sacrifice and the dedication and hard labour of so many others, we now have a cool way to walk from Brooklyn to Manhattan and back, enjoying one of the most spectacular cityscapes worldwide.

In fact, the only place I can think of that would top the skyline view from the Brooklyn Bridge is the magnificent Bay of Honk Kong.

We now have a cool way to walk, as I think I just wrote in my modern English. The folks who built this bridge would not even have understood what I mean by that. Cool? Why, is it a bit cold up there? And once enlightened, they would have remained skeptical. How could we call such a marvel of engineering, the fruit of 13 years of incredibly hard work involving over 20 casualties and requiring 3600 miles of cable wire – "cool"?

Easy. You just need to be a 21st century child. To have seen a man walk on the moon. To have flown

across the ocean in a giant coach along with 300 others just below the speed of sound in 5 hours. To have been granted a view through space to an event horizon located over 46 billion light-years away. To have explored the human anatomy from a front-row perspective with miniaturized cameras. To have decoded the human genome. To be able to write this today in New York and have you read it from half-way across the globe, instantly, on your iPhone.

We are a spoiled species. We tend to take it all for granted. Still, the Brooklyn Bridge is so freakin’  cool.