As I sit at home in an almost empty apartment, sorting out my fireworks pictures while waiting for Craigslist to do its magic and rid me of a few remaining pieces of furniture, I am peering through my immense window at the city beyond. 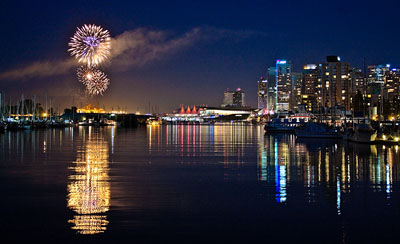 Without leaving my seat, I can count around 60 buildings – the tallest being Shangri-La at 62 floors – and less than 10 of these are office towers. With more than 100,000 people living on a 5 by 5 km peninsula, the heck if I can’t sell a couple of dressers, a table and a bed.

The July 1st fireworks seemed lame but I was stationed further away than usual. I had decided to include more skyline in my shots and parked myself at the very beginning of Coal Harbour, where the city meets Stanley Park and water is at its calmest.

In any case, I thought it would be proper to end my photo posting from Vancouver with fireworks. These will be the last pictures taken in Vancouver this year, and maybe – who knows – forever. I hope to be able to post something from Quebec next week-end, maybe a trail run report from revisiting the good old Dieppe run on Mont St Hilaire. And then entries will resume from New York, and this blog’s name will change slightly. Stay tuned!