The western side of the Manhattan Bridge lazily climbs over the East River from the very odorous heart of Chinatown.

Much less scenic than a Brooklyn Bridge crossing, a walk over this bridge is plagued by an extraordinarily high noise level. Joining roaring trucks and honking cars, the MTA subway crosses the bridge in open air right next to you, deafeningly loud and making the bridge shake so badly it raises the safe shutter speed for hand-holding pictures a couple of stops. The tracks are right above the road lanes, almost flush with the double walking/biking lanes and obscuring the view from one side to the other. A choice thus has to be made when crossing on foot based on what scenery one prefers.

Mine is a superbly heterogeneous collection of rooftop graffiti a few blocks away from the river and to the south, at a level where the bridge still struggles to gain enough height over the water for a safe crossing, barely clearing the top of nearby houses. 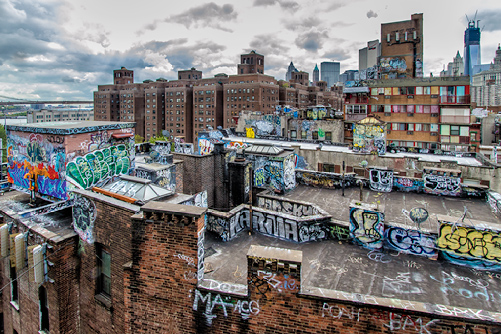 That day, a older tourist was taking pictures too, on an iPhone, and quite surreptitiously. He would look around him, whip the phone out of a pocket, aim, shoot, and stash it back safely in. Eventually he came over and we started talking. He had a slight Eastern European accent but spoke decent English. Staring at my long lens with envy, he asked if it managed to sneak through the fence. “I had brought one too,” he added, “but I did not think the bridge was…” He glanced around suspiciously and then looked at me as if awaiting judgement.

I realized he probably thought the place was rather isolated and must have been unsafe. I pondered distractedly what image an foreigner would have of New York and figured that while the city has cleaned up nicely, people of a certain age who have watched the movies of the ’80s would not know so.

“Oh it’s fine,” I nodded, trying to reassure him without making him drop his guard so low he would actually get in trouble. New York remains complicated. 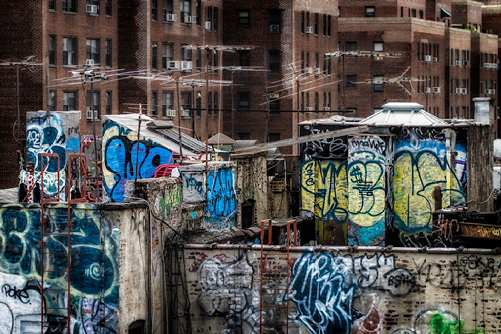 Later, as we passed again, still shooting, he waved at the scene – a busy Chinatown street, rooftop graffiti on each side and the tall silhouette of 1 WTC in the background – and said: “This is amazing contrast of different cultures and different levels of…” He hesitated, looking for the world wealth. I agreed. “There’s New York for you.” 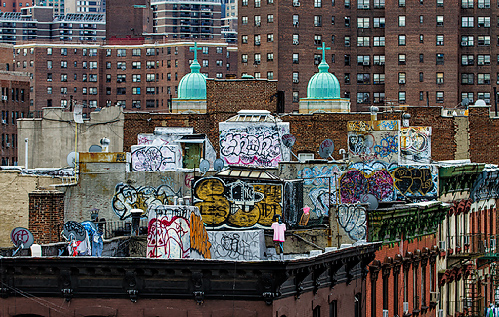