Aldergrove is not a destination reached by mistake. It sits right on the the lower right corner of the Greater Vancouver Translink transit map, as if ready to fall off the edge into oblivion. It takes will and determination to go there. And sure enough, once you make it there, you wonder why on Earth you came.

There isn’t much in Aldergrove. Fields surround the town and large pick-up trucks remind visitors of a borderline redneck culture. But Aldergrove has a hidden asset, an anchor that keeps it securely fastened to the map and somehow linked to the metropolitan web of tourist attractions. It’s the Greater Vancouver Zoo.

It took me nearly two hours on the SkyTrain (to the end of the line, King George) and bus number 502 (down the Fraser Highway) to get to within 45 minutes walking distance of the zoo. Nobody seemed to notice my raised thumb, so I walked.

Then I spent over two hours walking around the vast GVZ compound. No small cages there, most dens were quite large and the bears even lived with wolves in a vast wilderness enclosure area visited only by bus. Animals seemed happier than expected and in pretty good shape.

I even got a few treats: the first was a pack of four wolves attacking a black bear in the wilderness area (granted, the four of them weren’t enough to harm him so they were merely messing with each other, but still quite impressive.)

Later on, as the sun descended slowly towards the horizon, I suddenly heard a long-forgotten noise. It took me a few seconds to realize that the wolves were actually howling! I hadn’t heard that since spending nights in the Laurentian Mountains, over twenty years ago. Chills ran down my spine. Not from my own fear but rather from an ancestral one, a deeply buried legacy of old times when survival was man’s main goal and howling wolves meant danger and terror.

And then there were the giraffes eating peacefully from children’s hands, the black panther which tried to spray me for standing too close to his territory, the five week old cute little bisons, the comical zebras and… Hmm, that reminds me of the story of a hippo. "You see, he always wanted to be a zebra…" Well I can’t do the French accent in writing so there’s no point. (I’m referring here to Hank Azaria’s hilarious interpretation of Claude, the French nudist dive instructor of St. Marteens in the otherwise boring movie Along Came Polly.)

On the way back, some dude was kind enough to pick me up and turned my 45 min. walk into a 5 min. drive. ¡Olé! 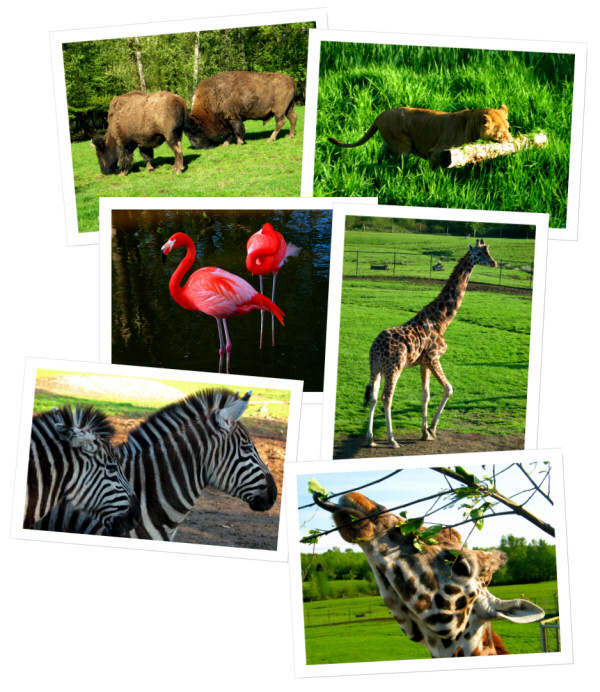