A funky lunch with chef Bruce Robertson in his own home, the Boat House, Scarborough, South Africa
Photoblogs, South Africa

Update: Bruce passed away seven months after I wrote this. RIP Chef Robertson.

Scarborough is a tiny outpost on the Atlantic Coast, beyond Misty Cliffs, south of Cape Town. A three-way stop sign, a few houses, a long deserted beech and plush fynbos on the hills above; one normally doesn’t come to Scarborough. This is just a pretty drive-through hiccup on the way from Kommetjie to Simon’s Town, or maybe even Cape Point.

But it is home to chef Bruce Robertson, aka Happy Days. There, in the absolute quietness and uneventful isolation of the Cape Peninsula, he runs a new wave restaurant called the Boat House, at home.

Marie’s parents had been there before and brought back stories of eccentric delicacy and secluded charm. Her mother Maureen booked the three of us in for lunch last November. She said it was like nothing else.

From Constantia, we drove the BMW down the M3, up Ou Kaapse Weg, past Noordhoek, through Kommetjie, along the Cliffs and into Scarborough. After stopping briefly at the beach as we were a touch early, we drove back up a few hundred feet on a small uneven road lined with a few houses and sacred milkwood trees. Having found the house, we parked in front and as we got out of the car and stretched, our host came to greet us at the gate. Two dogs rushed out with him, happy to check out the street and smell a few messages left for them on bushes and trees.

Bruce was wearing a chef’s apron and was barefoot. He welcomed us and let us into the garden. His two-story house had a wide balcony and we were ushered upstairs where the show was to happen. The walls were bright white and a table was set for six. Two helpers were busy in the kitchen corner of the large upper floor. Out on the balcony, we could see the ocean through the milkwood.

Three couples eventually arrived and we chatted for a while, our host going back and forth between his guests and the kitchen. But soon he invited everyone to sit down and the curtain was raised. Bruce stood on an invisible stage that spanned most of the kitchen and he towered above the two tables, reaching out to the audience like a tenor on a solo. 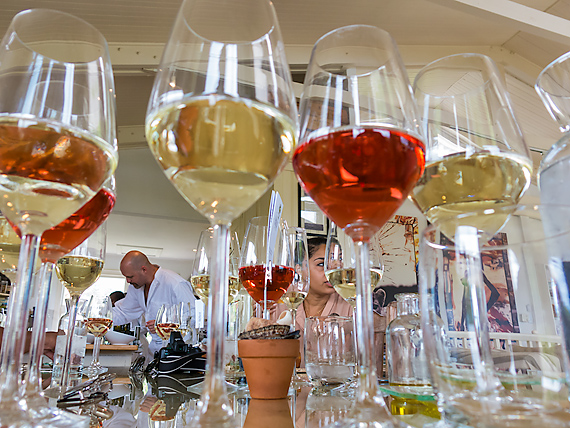 Chef Bruce Robertson prepping through a forest of wine glasses

“Hap-py days,” he said after a long intro, his intonation lingering on the first syllable like honey refusing to drip from a spoon. This expression was going to come back many times through lunch and Bruce used it interchangeably like a punctuation mark, an introspective time out and a grand finale.

He gave us a bit of background, then spread some more and packed it in just to be sure. Food and cooking were undeniably at the epicenter of his life and he had slowly drifted from the busy restaurants of others to his own style and pace in the comfort of home.

The whole seafood meal was designed as a tasting, and wine was but an element of it. Three glasses of it stood next to each of our plates, which Marie and I thought was a bit odd as the two whites were, and stayed, warm. Local and seasonal ingredients were at the heart of the experience. And when I say local, I mean it: The sea snail in the picture below had practically walked into the house begging to be served. 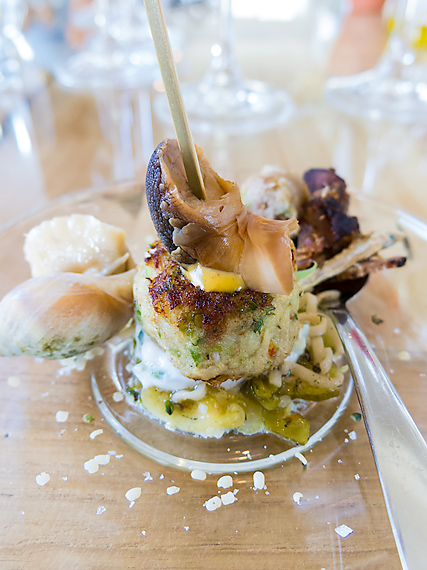 There were five courses on the menu, and while I wished the bite-size portions had been more substantial, the food was inventive and delicious, out of the ordinary and prepped lovingly in front of us.

I’m not necessarily one to enjoy the conversation of strangers over a meal but I’m sure this appeals to many. I guess like anything else, it’s hit and miss. It was weird to have escaped so far from the States and find ourselves, in this tiny seaside outpost, entertained by a chef without shoes who cooked seafood he had himself gathered nearby, in the company of Americans.

On the road back home, we spotted a patch of bright pink flowers on Silvermine, so when we got home, Marie and I decided to trade the BMW for the good old Kombi and we went back out to take pictures. They were posted here.

Now it appears Bruce is leaving Scarborough and moving his stage to nearby Simon’s Town, where he will launch Flagship, 16 seats for lunch and a B&B.