If It’s Tuesday, This Must Be Maine

Trip report of our recent escape to New England
On the road, Photoblogs

After two hundred debilitating days of quasi-total isolation, of hunkering down and stocking up, of washing hands, clothes and goods at a frenzy, of avoiding our kind like the new plague, and of barely buoying our sanity up through carefully distanced local park visits, Marie and I might have succumbed to cabin fever had she not, long in advance and out of sheer wisdom, booked a Maine cottage for a week.

September had found us pale and weak, not so much in physical terms because we had kept our exercise regimen up, but in spirit and boldness. Like most of humankind a half-year into the pandemic I would assume, we were somewhat ghostly figures, merely surviving and waiting—waiting for hope, for progress, for breakthroughs, for control, for wisdom, for calm and safety, for recovery, for a laugh that would not be contrived by the cast of COVID’s shadow.

Work had been ferociously tense and while I was lucky to even hold a job when so many no longer did, it yielded great exhaustion. 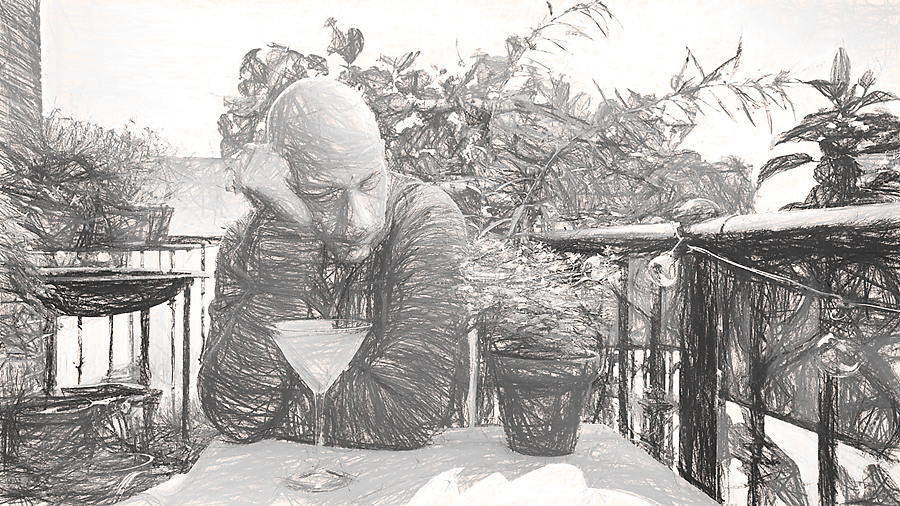 Work. Sleep. Repeat. Without an obligation to commute to Midtown, I had reclaimed a whopping ninety minutes daily, a beautiful double-edged gift that had cost me fresh air and much needed walking, and which like most, I ended up wasting into longer workdays, unable to willingly draw the healthy stop-line once so clearly marked by an office clock.

In exchange, I ran. To alleviate stress, to forget the madness, to compensate for snacks, to breathe deep, to clear my head, to be outside, to feel free. I actually ran over three hundred miles in those six months, and never once did my knees complain. À toute chose malheur est bon.

But on that late September Monday at dawn when we hit the road in Ntini our beloved VW, with a nine-hour journey ahead of us, my heart was heavy and my mind, depleted. It was time. No quarantine lay ahead, the road was clear. We just needed to get there.

True to our old African road trip habits, we had strong coffee in a thermos, and exceptionally, rusks, as if their brick-like toughness could magically melt the tar into dust, extinguish traffic, crank the heat up and transpose us into the Namib Desert or Kruger Park.

By comparison, Maine was a modest objective but a dual gamble remained: would Marie’s back endure extended sitting and would I have strong enough an internet connection to be able to work—because I had committed to a “workation”. It was the end of the month and while taking the Monday had been unavoidable, two days in the trenches remained.

The drive was uneventful with little traffic to hinder our progress and miles ticked by steadily as state lines flashed past. We left New York behind and crossed into Connecticut, then Massachusetts, scurrying past Rhode Island to the east, skirted around Boston, had a fond but fleeting thought about Rockport and its Bearskin Neck, hopped into New Hampshire and finally, crossing the Piscataqua River in Portsmouth, we entered Maine.

The Maine leg represented almost half of the entire trip and by then, fall colors had come alive to our great delight. The weather degraded but our smiles grew wider.

Of all the eastern states I have visited, Maine drivers are by far the nicest. They are courteous, understand the concept of a reasonable following distance and even when you are slowing them down, which as tourists we might at times have been guilty of, they are not riding on your rear bumper like rabid dogs. 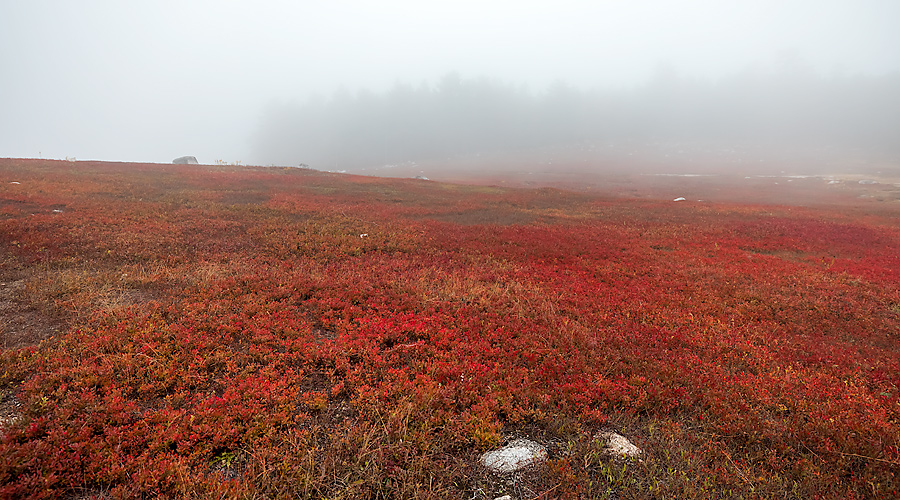 By the time we reached the Passagassawaukeag River Bridge, thick fog was blanketing the land. We continued north at a slow pace for a while, fog lights on, then doubled back to the south, past the town of Blue Hill, and finally arrived in Sedgwick, in quite the legendary middle of nowhere—by New England standards at the very least.

Adjusting to the pandemic, our Airbnb host had arranged contact-less check-in, the door was left open and communication was handled through text messages. Our quite sizable cottage was located on a large, slightly sloping waterfront property, and while the owner’s house was way up by the road, we had scored the exclusivity of the shoreline. 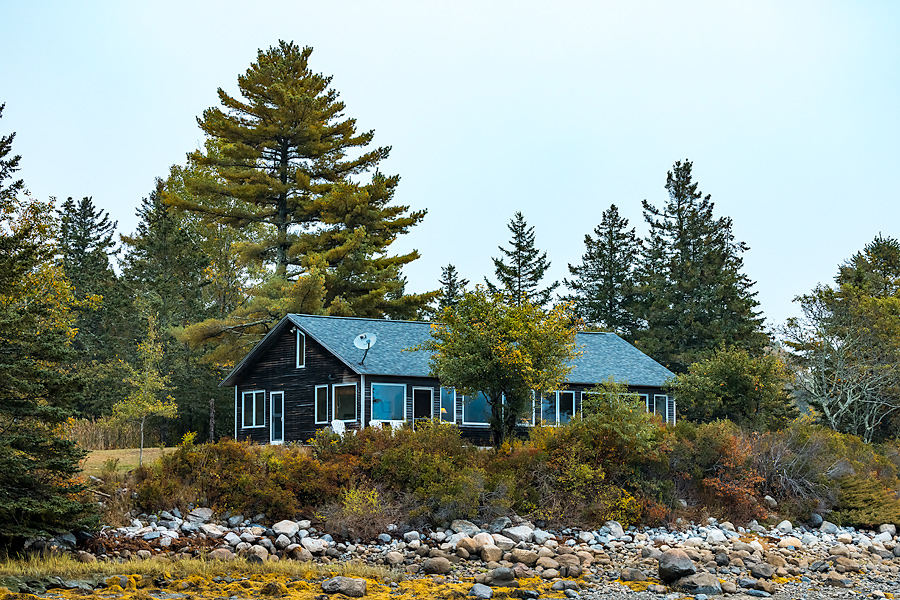 We unpacked partially but soon both of us were distracted by the novelty of a new environment and, the full day’s drive forgotten and Marie’s back surprisingly fresh, we drifted towards the things we love. She introduced herself to the local plants and started picking wild apples, and I grabbed my camera and descended onto the exposed tidal zone at the foot of the house.

Maine claims a lot of coastline, some of it rather straight and lined with the immense sandy beaches I remember from early childhood vacations in Ogunquit and Old Orchard, but here in the north the coast was tortured and chiseled, flanked by hundreds of small islands peppered around like confettis, the likely ravage of million-year-old glaciers.

So from our vantage point at the bottom of a small inlet, there was no direct line of sight to the open ocean. That, as someone very smart commented afterwards, is a bit heartbreaking, since the limitless, dizzyingly flat and forever dream-laddened line of an ocean horizon is one of our species’ most cherished utopias, as Captain Jack Sparrow kindly reminded us. Until one remembers that the coves, inlets, islands, beaches, capes and peninsulas of a rugged shoreline harbor as many—if not more—secrets than the enormity of a vast sea. 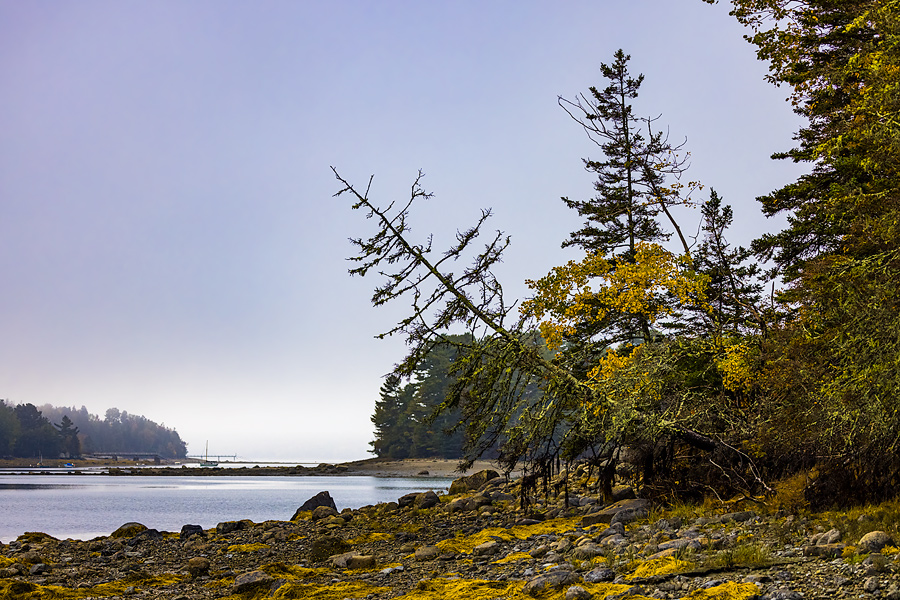 Waking up at dawn on Tuesday, I glanced around me with surprise while rubbing my eyes, before realizing this was Maine. Our cottage featured a wall-full of windows opening onto the inlet and for the next two days, I worked in the most exquisite setting while Marie drove around exploring the vicinity. As soon as I could sign off in the afternoon, we would set out on walks along the shore or quick rides to nearby spots which had been warmly recommended by a couple of our Brooklyn friends whom we had known owned a small house in Maine, and which turned out to be just a few miles down the road. It is a small world.

At night we braaied when possible, some nights almost frosty and others, comfortable. The weather unleashed its full panoply of personalities, serving us with a solid ration of fog, gale and downpour, but some beautiful blue skies and shiny autumn days as well. The tide came in and left repeatedly, patiently, our resident heron materializing like clockwork on a flood and ebb schedule.

When my work duty was done midweek, we ventured further out, finding gems of extraordinarily lush and green forest undergrowth covered with impeccable parterres of the most delicate and spongy moss, outcroppings of granite boulders crowned by intricate lichen and surrounded by the lavishly bright-red leaves of wild blueberries, exquisite remote coves whose exposed yellow algae shone warmly in dim stormy light and pristine isolated beaches that begged us for a picnic and a swim, had it been summer. 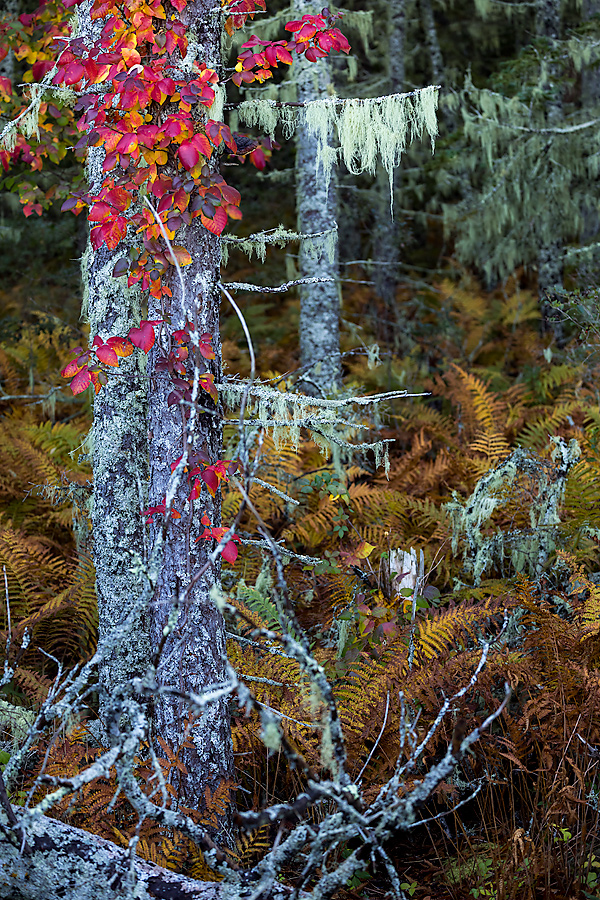 To her absolute delight, flabbergasted Marie found a few matsutake mushrooms, worth more than truffles in Japan. Sprinkled throughout the week, we were treated to a bald eagle, lots of king fishers and woodpeckers, wild turkeys, some deer now and then, a porcupine, rabbits, and, in a pond behind the cottage, four endearing muskrats with a weakness for apples. Nature was everywhere.

Concluding a brief and dutifully masked visit, our friends lent us a canoe and, my photo bag settled between us and wrapped into an industrial-strength garbage bag just in case, Marie and I paddled across to a small uninhabited island, landed on a narrow pebble beach, pulled our embarcation up high and silently ventured into the forest with the curiosity of a Robinson Crusoe. It was Friday, after all.

We later bought fresh lobster from a local source on the honor system : it was after five and nobody was around, so the shed next to the beachside house was left open and inside it, a scale was provided next to a few oxygenated water tanks where the catch of the day awaited its sentence.

Marie was braver than me and reached in with a net, grabbed a lobster, weighed it, checked a small board, mused some calculations, inscribed our purchase into a small book, repeated the operation, left some cash, and we walked away with a couple of live lobsters at five dollars a pound(!), having never seen a human being. 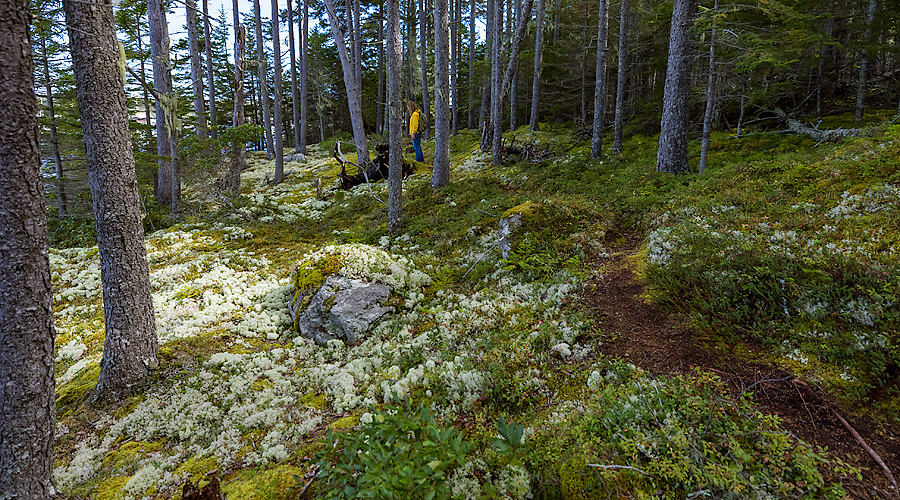 Too soon, it was time to leave. We had found enough interesting food at the closest grocery store some twenty-five minutes away that the coil of custom-made boerewors which we had brought frozen with us from the city, came back with us.

Long-range driving through a pandemic is a rather sheltered experience. Stops are a risk rather than a relief, so we pushed hard, stopping only as absolutely needed, and were home in time for the seven o’clock pot banging rendez-vous, only a few months late. Essential workers might be taken for granted nowadays.

We liked Maine. Bottom-line though, traveling, anywhere, is essential. It unravels the tightest knots inside of us and like a wild wind dusting a long abandoned barn, chasing stale air away and exposing the cracks, it makes space for new ideas, renewed courage and an ever-so-slightly more open mind.