In the Realm of the Frenchie

The heart’s home of the Frenchie…If he could have, Vince 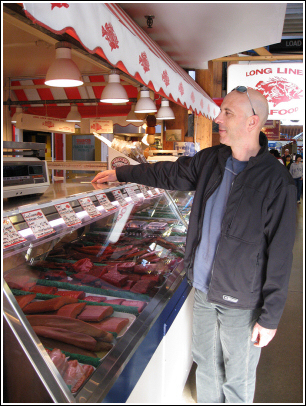 would have
climbed into this display case on Granville Island and
rolled around in the candied salmon. It was my first taste of Vancouver and I was very sceptical. Fish with sugar? Like, eugh? It was delicious!

I have also discovered that he will
do…anything…for thinly sliced duck prosciutto.

Vancouverites say goodbye and thank you to their busdriver, even if they are getting off at the back.

The Swiss should be envious of the bus schedules.

Homeless Vancouverites pack all the trash they have just unpacked from trashcans, back in, very neatly, once they have sifted through it.

Moss should be the city plant.

Alcohol
is really expensive here! Every sip of a martini is savoured. A New
York, $10 bottle of Oyster Bay Sauvignon Blanc, is $18 in Vancouver.

Chambar
is one of the nicest restaurants I’ve eaten at, anywhere. Roast
morelles, pear and Serrano; baby beet and goat cheese; the most
delicious pot of mussels with frites, and a Spanish Gewurztraminer…

Drinking beer at the lodge on Grouse Mountain is like being inside Twin Peaks.

The logs on the beaches at the seawall are both beautiful in a symmetrically parallel way, and very good to sit on.