Cuisine Savoyarde is among my favorite on Earth. Rich, thick, tasteful, cheese-based, it makes for perfect meals at the end of a long mountain climbing day. To really enjoy it, you must be exhausted, happy and sore. You should still be wearing your mountain boots and a fleece, and you might even be a little stoned from breathing so much fresh air.

So I was recently lost in utopia, contemplating an attempt at gratin dauphinois from Patricia Wells’ Bistro Cooking (thanks Marie) and went shopping for supplies. While at the store, as I was losing my focus and my thoughts drifted towards hazy horizons, I suddenly remembered my third favorite Savoyard dish, la tartiflette (the first and second being cheese fondue and raclette, respectively). I instantly decided to bridge the two recipes in order to come up with my own weird concoction, which I would name Vartiflette, with a V for Vince, Vancouver or Viljoen. My excitement must have reached that of Dr. Frankenstein after he drew the plans for his creature.

While similar to conventional gratin, tartiflette involves lard (a classic French ingredient, so hard to come by here), onions and a touch of white wine. Qui plus est, I vividly remember eating an amazing variation in Chamonix that incorporated chanterelle mushrooms. So I shopped some more. The creature was taking shape.

Of course, this being Vancouver, I couldn’t find creme fraiche and I had to replace it with whipping cream and lemon juice at the suggestion of my personal adviser (it was too late to go back out and buy sour cream. Duh.) Then it turned out chanterelles were out of season. I hesitated forever between skipping mushrooms altogether and trying another kind, which would no doubt be a crime since chanterelles’ taste is so particular. I ended up taking a chance on shiitake.

Here’s the recipe I put together, amalgam of two or three different templates found on the web for gratin and tartiflette. It’s a total improvisation – purists please close your eyes.

Ok. Here’s the deal. I started with the shiitake, frying them alone to get a sense 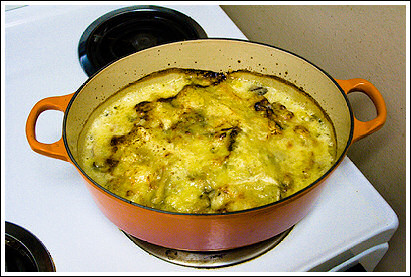 of the taste, which ended up being all right with garlic. I put them aside and followed with the chopped onion and bacon. The French recipe said “faire suer“; the hell if I knew what that means in a kitchen, so I sweated myself instead and waited for them to look sort of cooked, but not too much. How scientific is that?

Meanwhile, I had peeled the potatoes and cooked them whole, as it was suggested in my original tartiflette recipe. BIG mistake. Then I rinsed them and sliced them. Too thick.

The Moment had come. The organ started playing and echoed through the high walls of my castle. I had to use my awesome Le Creuset pot ’cause I love it, and ’cause that’s all I own.

Half the sliced potatoes went in first, then half of the onion/bacon/mushroom mix, then the rest of the ‘tatoes, the rest of the mix, I poured the cream over all that and then added a glass of wine (another mistake, I should have started with the wine and then finished with the cream, not to dilute it away from the top layer). And finally, the cheese, sliced and layered over the dish.

I stuck my Vartiflette in the oven preheated at 230°C and waited… I must have waited about 45 minutes until I just couldn’t take it any more. The cheese had turned a nice color and I reminded myself that I didn’t have to wait for it to turn black like the top of my flan. Too late. I wanted to create something beautiful but that picture just looks awful!

Result: I had fun playing with my toys. But the Vartiflette did not live up to my hopes of glory and the creature was rather ugly. For one thing, I decided that pre-cooking the potatoes was a mistake and I should have sliced them much thinner, and left the darn thing in the oven twice as long. There wasn’t enough cream, either. And my emmental did not succeed at replacing reblochon. This being said, I ate the entire dish in 3 meals. That’s the pig in me.