Interview with an Empire

A review of Steven Spielberg's "Empire of the Sun"
Cool, Reviews 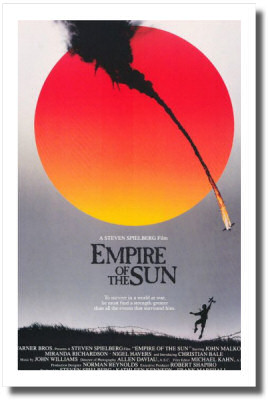 Again? might one ask. Indeed. I’ve just watched – yet again – one of Steven Spielberg’s masterpieces. Featuring a brilliant soundtrack by John Williams and a stunning performance by 13 year old Christian Bale in his first big screen role, Empire of the Sun is a little gem. John Malkovitch is also quite young and does a great job in his supporting role, and we get appearances by then unknown Joe Pantoliano and Ben Stiller.

Bale simply rules the movie from beginning to end, as comfortable and powerful in his role as any adult ever will be. The theme is one of Spielberg’s old favorites: war and prison camps. But this time the scene is set in occupied China during World War II as Japan is headed for disaster. A British kid gets separated from his family and soon looses his innocence learning to survive among the cruelty of adults. As people are dying around him, he discovers the fragility of life and manages to keep it together long enough to see the end of hostilities.

Beautifully filmed, Empire of the Sun is never really violent. It’s a colorful fresque and remains for me one of Spielberg’s greatest achievements.