Interview with Jerry the Grouper

The year was 1999. We had met with the late Ben the Grouper for a very special interview. Little did he know he was actually dictating his legacy, and fate would indeed make him a victim of fishing…

Three years later, the prophecy has come true and Jerry agreed to meet with us to talk about his new stardom. 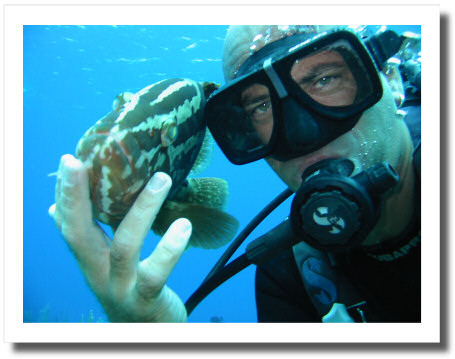 Loyal to our underwater journalism ethics, we have agreed not to censor or edit the interview too much ; the opinions expressed by our guest do not necessarily reflect ours, and Paradise Divers declines any responsibility for content and language.

Rod: Hello Jerry, it was very nice of you to arrange this meeting.

Jerry: My dear Rod, it was the least I could do for you guys. Besides, I am such a popular fish, I know that your audience will truly appreciate the greatness of my personality.

(Do we detect a hint of a French accent here?)

Vince: So Jerry, how does it feel to be the new rising star down there? It seems Ben did you a great favor by disappearing…

Jerry: Well let’s not blow his role out of proportion. Granted, he did have a few decent years, but I think it’s clear that I was always the chosen one.

Rod: You mean you were just waiting for your time to come?

Jerry: One must be patient and seize the opportunity when it passes. By the way, have I given you one of my dedicated pictures?

Vince: You seem to forget that we are the ones taking those pictures, Jerry…

(There is definitely a French accent.)

Rod: I think our readers would really like to hear about your fascination for Squirrelfish. Can you elaborate on that?

(Jerry pauses for effect, takes a relaxed stance and turns slightly to his left, which he considers to be his best side.)

Jerry: Squirrelfish are at a much lower level of the reef hierarchy. You see, us Groupers pretty much dominate a reef’s ecosystem and we must act accordingly. We do feel pity for simple fish like the Squirrelfish…

(Here Jerry rolls his eyes backwards, as if thinking and he mumbles to himself: “And they do taste a little bit like chicken…”)

Rod: I beg your pardon?

Jerry: Oh nothing. As I was saying, it’s my pity for the Squirrels that has drawn me to design what I call the “7 Seconds to Live” training program. I have decided to give them a chance at survival by training them to react quickly to aggression and learn to flee. It’s an effective protection and I actually use it myself once in a while.

Vince: Now that’s interesting. How exactly does it work?

Jerry: It’s pretty simple. I chase them around, scare the living daylights out of them, and corner them into a hole. It takes seven seconds. They ink themselves, and they learn. I’m a great freakin’ teacher.

Rod: We have heard rumors that you actually get a thrill out of their fear, and particularly enjoy their defensive sounds and the way they quiver. Is that true?

(A good size Squirrelfish passes by and we all see it jerk a little when he notices Jerry. The Grouper’s skin suddenly goes much paler and for a moment he appears to be fighting an intense battle with himself. Then the drooling stops and he regains control.)

Jerry: Well, not really, but these are good signs that my teaching is reaching them, so I always pay attention.

Vince: Aren’t you afraid that some fish will come up with a “Six Seconds to Live” program and beat you at your own game?

(Jerry stares blankly for a while, winking his left eye nervously.)

Jerry: Ugh? No! It’s Seven Seconds to Live, not six!

Jerry: I am a star, I need an audience. I am just doing you all a favor by performing while you watch. As for pointing out the trainees, that way they can’t accuse me of favoritism!

Vince: Well Jerry, it’s been most educational. Is there something else you’d like to declare?

Jerry: Yes, first of all, I understand they have renamed the Jewfish into Goliath Jewfish. That’s great, I too wish to be renamed Mighty Gargantuan Jerry.

Vince: Hmm, and what else?

Jerry: I have initiated a lawsuit against Pixar for not including me in the Finding Nemo score. It was totally unfair since I would have been a much more credible hero then that ridiculous clownfish. But I don’t quite get the thing about those turtles riding the current and calling everybody “dude”. What’s a dude?

Note: Don’t let the interview’s joking tone fool you. Groupers DO change colors as they change moods. They ARE indeed some of the largest predators on the reef. And Jerry WAS, just as Ben before him, able to recognize particular divers and establish eye contact. He COULD understand simple hand movements such as pointing and DID react to the sound of snapping fingers by rushing in like a dog. He would rarely chase Squirrelfish on his own during the day if divers weren’t involved. We’re not sure whether he saw this as team hunting (just as he could have nuclear-hunted with a moray) or if it was a more sophisticated behavior related to a game. At night, though, he followed us and used the beam of our lights to hunt for anything he could find, octopus included. I don’t know if Jerry is still around. I hope so.