A curated observation of commuter interactions makes me ponder the value of language
Schtroumpfissime, Stories

It is a precocious, chilly morning and the doors of my Manhattan-bound F train open unto a few vacant seats. I have selected the forward-most car but going into town before dawn, conspicuously free seats often have just been used as a warm and relatively safe bed by homeless wanderers and that open space is eyed suspiciously by even the sleepiest of commuters. No one wants to be the first to sit down where a ghostly character with a terrifying lack of hygiene has spent the night, and I will spare you the gory details. Boarding the train, I have learned to read the silent glimpse of a warning in someone’s eyes as I head for a seat that looks too empty, and decide to stand.

To my left, regulars, an African American mother and her three young kids, dressed for pre-school. Above-average behavior compared to any kids on the subway, the trio never fight, whine or shout and while they do not strike me as wealthy and probably come from much deeper down the line, their clothes are tidy and their school bags neatly buckled. When they are not asleep leaning on one another like weeds in the wind, the older two often share an iPod but the youngest girl is more interested in her surroundings. I have seen her pay close attention to the work of a woman typing on her laptop next to her, mouthing the words she was deciphering. Today the mother is teaching her simple phrases from a children’s book, probably just to keep her occupied. I ponder how far they are going, what their school is like and what they are taught. I silently wish her well. The kids have been eating some kind of crumbly sweets with delight and the mom carefully gathers the leftovers on the seat, but rather than through them off to the floor like most adults would, she brushes them neatly into her backpack, as my jaw gaps.

As I exit at 34th Street, people pick up the pace around me; offices are calling, deadlines lurking. A large rat is dying against a soiled wall, likely poisoned by MTA rodenticide for my comfort. I wince. I do not like pests but this is no way to start a day, or to end it.

The old man with a camera is standing in his usual spot, the muffled sound of a radio talk show creeping from his bag. Probably shelterless, he wears an old film SLR around his neck like jewelry. I have never heard him speak or engage anyone. His life might be knitted around silence. The home in his mind could be empty.

I am greeted at the top of a deep escalator by a free newspaper handler. He launches into a quick, unintelligible speech, trying to sell me the fact that this is no sale. They each have their own single-sentence recipe, their routine, their magic charm or the lack thereof. They must be remunerated–miserably–by the number of papers handed away, but I wonder how one can track that. They could easily drop their load into the next garbage bin and go home, right?

The end of his pitch, however, ends with a low “Good morning sir”, to which I answer over my shoulder, surprised but not to the point of twisting my neck for eye contact. Communication has failed.

Further down, two Hispanic men, low on their legs and hands roughened by hard work, pay each other farewell. They are switching carefreely from Spanish to English and their foreign accent has the clean scent of Mexico. I like continental Catalan even though it is a bit affected, but Mexican Spanish is my New World favorite as it is among the cleanest to my foreign ear. Caring not for swallowed letters, I would rather feel the full impact of a language’s song.

Just as in American English it seems, most Central and South American Spanish speakers tend to slide towards a deprecated version of their mother tongue where a sentence loses its individual peaks and valleys, leveled into a monochromatic flattened landscape reminiscent of a post-nuclear plain. What was beautiful grammar and tonal flowers becomes an idiomatic long sound, merely a blend, flat and scrubbed clear of all quality, and its words, vowels and consonants melted into a single glide of the tongue, understood by most but lacking the beauty and precision of language. It has become a code, a shortcut to a quicker exchange, evident proof that communicating is a matter of necessity and time rather than an art worthy of itself.

And unfortunately, the only known antidote capable of lengthening sentences appears to be the word “like”, a new robotic tool used systematically as mortar around crumbling words to try and stabilize them. Like, everywhere.

Nothing clearly, since even the Oxford Dictionary is now inducting in its hall of fame scrambled expressions such as the “fuhgeddaboudit” I was mentioning recently. And not only is this verbally equivalent to mashed potatoes, it constitutes an emerging cultural phenomena where the vomited sentence not only opens the conversation but also closes it. One is thus able to make a statement that requires no response, nor interaction. 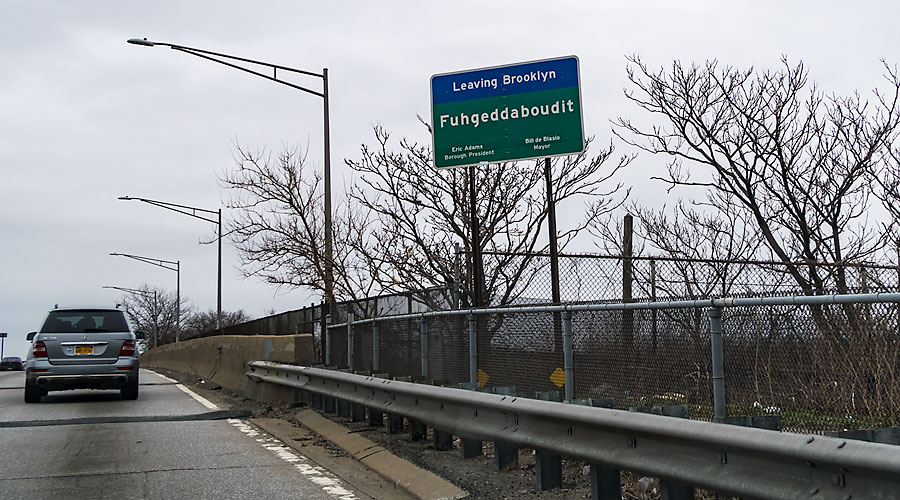 The same goes for those typical greetings that always catch me off guard, especially in the confinement of an elevator. “What’s up?” (wassup) and “What’s going on?” (wass goin on) are my most hated enemies. Neither requires a reply since neither actually reflects a curiosity about what has been asked. To the first, I routinely find myself answering despite my better judgement “I am, thank you” since it is unarguably the case in the elevator–I would never dare answer this when sitting down or sleeping. To the second, I lose precious seconds analyzing my life to extract a relevant answer, and by the time I have isolated a few key factors to report on, the silence has become awkward.

It is as though one verbally closes the door by asking a non-answerable question. A clever trick really, to be left alone while having had the last word.

A deep ocean separates these shenanigans from the polite exchange of greetings Marie and Selina perform in Xhosa every morning in Cape Town. The idea in that case is that one asks how the other is, is given positive feedback and thanks, along with a question in return to the same effect, equally important and answered as completely with as many thanks. Sure, this is a bit ritualistic and it does not seem to allow much in terms of deviating towards a heartfelt “I feel like shit! Thank you for asking. And yourself?” But at least, it is a full circle, back and forth, respectful and open.

Isn’t that it, then? Language by itself could be nothing but ego and pride, no matter how sophisticated we make it. For all I know, I am guilty of such pride in this very post, liking the sound of my own words.

A blog listens not. In the end, only once we master the art of listening can we truly claim that we communicate. It’s, like, totally that simple, yaknowhatimean?