Visiting recently on a business trip, I managed to spend a day and a half exploring the city
On the road, Photoblogs, Stories

February 2019, somewhere over the Atlantic. Having grown up in the friendly sun of a Southern France small town, with blue skies to dream in, flowers to roll into and la sieste to recover, I am apprehensive about first setting foot on Portuguese soil, fearing the biased comparison that will unavoidably occur. I have never visited the country and am somewhat prejudiced, probably deterred in part by a harsh-sounding language my French and Spanish tongues cannot sufficiently tame.

In a few unfair words, Lisbon is old, dirty and wrinkled. Walls city-wide are covered in graffiti, some artistic, most plain ugly. The stones are tired and tile theft has left facades scarred. Cigarette butts litter gutters. Grime runs down the city’s face like mascara after a grief.

But the heteroclite capital, it turns out, is also luminous and alive, peppered by twisted charm, sprinkled with charisma and drenched in flavor. 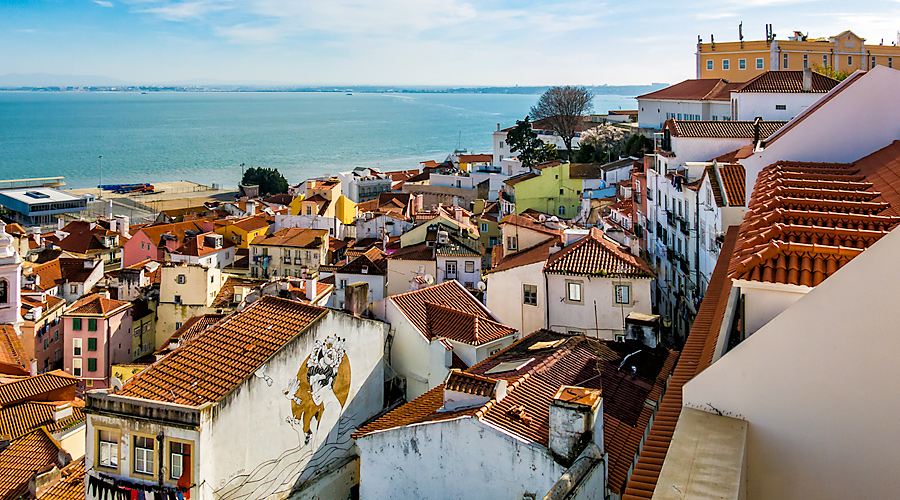 Fresh off the plane after a seven-hour red-eye from New York, I launch from my fancy hotel in the suburbs, buying a transit day pass that costs me seven euros and opens up the entire subway and train systems to my eagerness. My target is the oldest part of town where I intend to walk until I drop.

I emerge in Baixa, close to the sea, in shorts and a t-shirt—a striking February contrast with the Big Apple which, across the pond, hangs frozen from its New England tree. Locals are wearing pants and jackets, I even see some scarfs and have to smile. Seasons are so relative. At my right rises an escarpment called Bairro Alto. On my left and slightly further away lies Alfama, oldest district in Lisbon and my initial destination.

Alfama is a typical Old World maze of tightly wound and often steep cobblestone streets, alleyways and stairs. Houses are whitewashed or painted in pastel colors but the sun struggles to reach the ground, bouncing off rust-colored terracotta tiled roofs and a million antiquated TV antennae. Luckily, there are a few conveniently high-perched view points, allowing the inquisitive eye to peer down at the city. 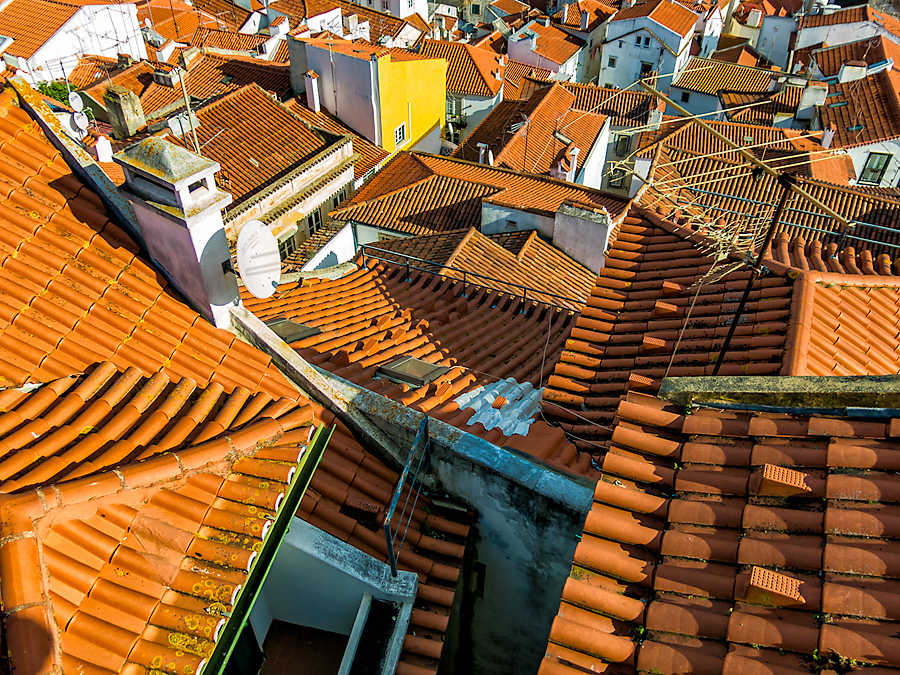 Down at the narrow street level, however, one often walks in deep shade, the eye constantly attracted upward by a myriad of clothes drying on their lines like as many colorful flags, each house a country, each window a port. Wrought iron is omnipresent and orange trees grow here and there, stranded among stones, cement and bricks, their branches drooping with ripe fruit. 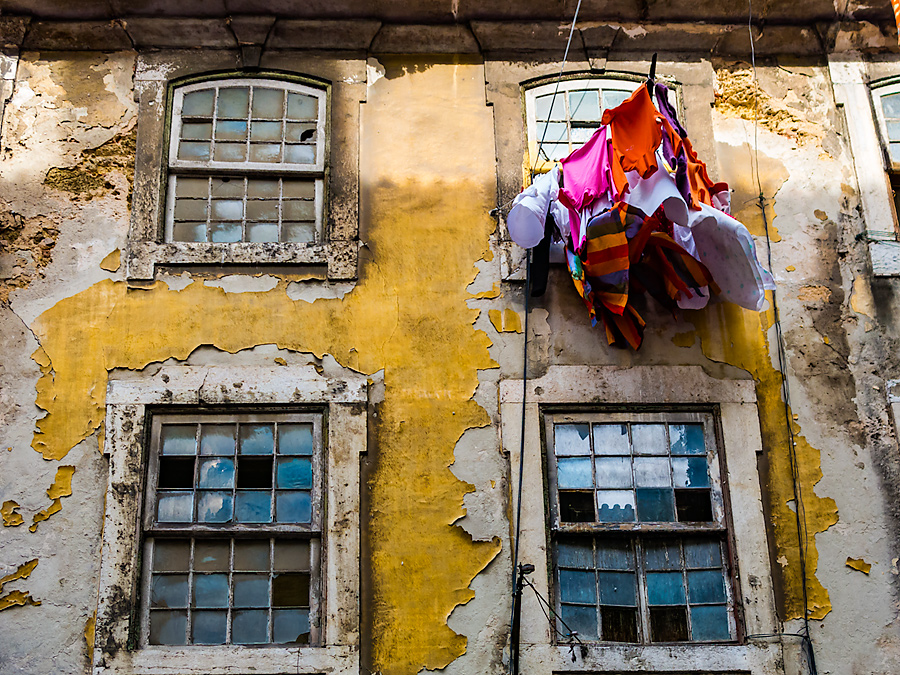 The old tram, its single headlight burning like the sleepy eye of a Cyclops, slowly winds up and down shiny rails with a modern affection for tourist cargo, a relic of days past that still outperforms conventional buses in such an impossible meander.

History has washed over Alfama colorfully, if cruelly, while Celts, Carthaginians, Romans, Berbers, Visigoths and Moors conquered, settled and vacated as the tides of Time ebbed and flooded. In the dawn of the twenty-first century, what is left is a very small country which managed to leave a rather heavy footprint on the world and whose language is spoken by more than two hundred and twenty million people. Lisbon, as the heart or source of it all, does marginally on the economy scale but is a bustling tourist destination.

There aren’t too many stores in the old town but as soon as I slip back down towards the flatter, avenue-ruled stretch of Baixa, shopping and restaurants abound. Pastelarias are a bit like toy shops for all ages, I like to think, and windows filled with row after row of croissant com creme, pastéis de nata, leite creme and other local delicacies attract passers-by, their camera, and their wallet. Few can resist the appeal and I suspect many a keto diet has met its Waterloo at such a storefront. 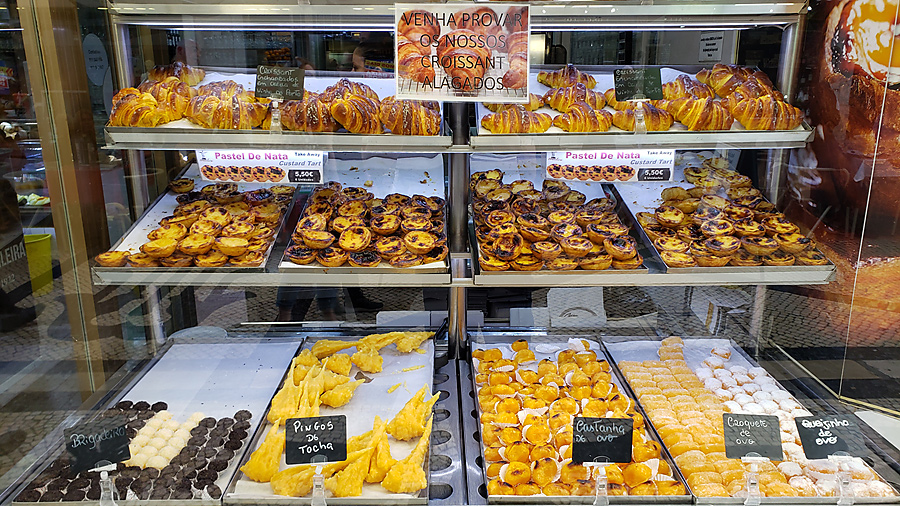 Crossing the four or five parallel avenues that define the city center, I climb into Bairro Alto looking for a place to eat. It is early still, the golden light slowly fading, and while the next nightlife cycle is hours away, my day was long and I am ready to call it.

Settling at a table in a small pedestrian side street, I steady my chair on the cobbles and order a glass of the house red wine. The food I choose is tapas-like and delicious, an octopus salad and a combo of beef and cuttlefish mini burgers, half of which appropriately rest on ink-tainted buns.

The flow of evening diners increases while I am enjoying the solitude of my spot, and I can see the wheels in people’s mind turning as they walk past on the main stretch, notice the curiously empty row of tables I sit at defiantly, assess the restaurant, glance at its menu posted on a stone wall, whip out their phones seeking reviews, walk away hesitantly, come back, and finally sit down. A connected world has radically changed restauration. Even I am guilty of having looked the place up and decided to stay in part based on rating. O tempora! O mores! 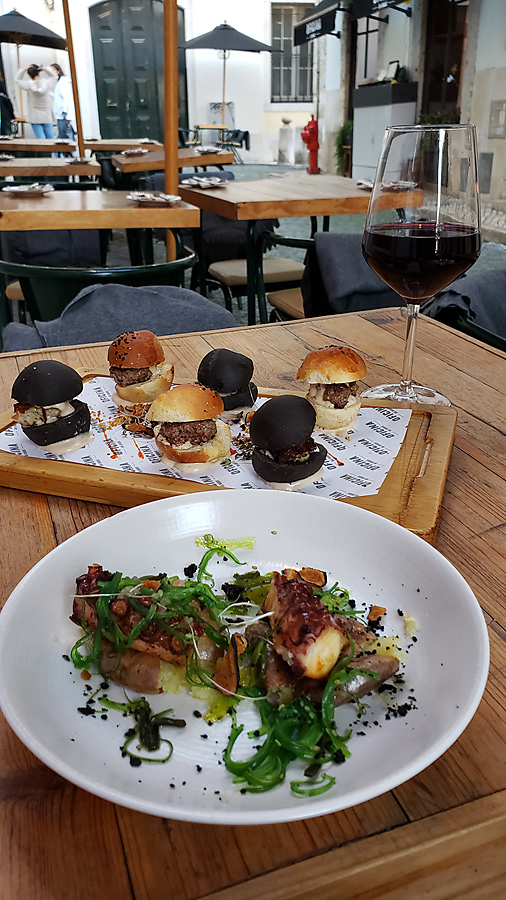 I had spent close to an hour queued in a line thousands of passengers strong clearing customs and immigration on my way in, so on the last day, after a sumptuous hotel breakfast featuring more meat than a butcher’s store and a morningful of work meetings, I head out to the airport early—just in case.

Having checked in and dropped one of my bags off in no time at all, I am left with two carry-ons and a few hours to kill. The transit pass takes me back a couple of subway stations on the red line towards the sea. I am now in a conventional neighborhood, away from the glamorous traps of tourism, and I stroll around for a while, stopping for an espresso at a corner cafe like I would have in Marseille, and like most Europeans have done daily for centuries.

It is such a simple, civilized thing to do; a short, community-rooted and culturally anchored ritual, where a very small dose of very strong coffee is exchanged for a few cents—one euro in fact—against small talk, maybe the weather, maybe them politicians, maybe last night’s local team victory. You sit down, you sip, in the moment, and eventually you leave, a pause on the way from here to there, from now to then. Repeat as needed. The slightly bitter taste of espresso cements one’s day, patching the holes and creating continuity.

What a stark difference with ordering a NYC Starbucks hybrid drink with twelve adjectives and being handed a coffee cup almost the size of a bottle, along with a rather stinging bill, never sitting down, never knowing others, never stopping, already thinking about the end of the day and all the overachieving needed to get there! 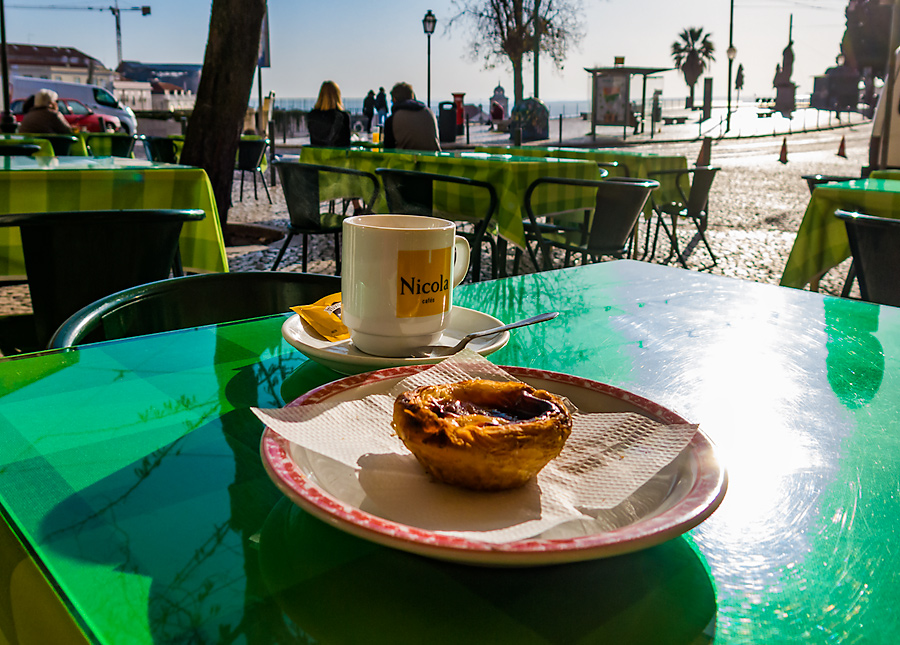 Seaside reveals an immense bay, and the seventeen-kilometer, low-lying bridge that spans it appears to stretch to infinity in a slight haze. I walk back to the subway, feeling hazy myself and pondering a very Vancouver-like courtesy, or maybe simply a diligently enforced law, that makes Portuguese drivers stop obligingly at every pedestrian sign where someone considers crossing. I have caught myself many times simply standing in the wrong place looking around with unknowing eyes, only to realize cars were stopping and waiting for me to cross! Nobody jaywalks in Lisbon, there is no need for it.

The waiting line only forms once I am deep into the airport’s bowels, past security, and arrive at an outbound immigration check. That Portuguese departure machine, it seems, suffers from the same drag as the arrival one does. I muster patience knowing that far away in the cold, Marie and Ntini await. Soon I will be whole again.

Some eight hours, three thousand five hundred miles, forty thousand feet and a couple of movies later (“open your eyes, look up to the skies and see”) and no wait in line, a USCIS officer grabs the form my automated kiosk spat out for me, glances at my passport, stamps it theatrically and purrs: “Welcome home, Vincent”.

For those of you with patience, a rather extensive photo gallery follows. It will give you an idea of what a couple of days of wandering through old Lisbon can be like. If you are headed down to the comments section, please bear with me as so many gallery thumbnails take longer than usual to load.