The Long Flight from Freedom

As modern South Africa mourns her father and leads the world through an unprecedented mega-media, uber-political and cheesy-flashy ride, and while Marie momentarily stays behind in the beautiful land of fynbos, I am now flying home to Harlem to tackle reality, trying not to forget that freedom is in the eye of the beholder.

When taxes eat up in excess of 40% of one’s income, when the over-achievement race turns relative victories into as many failures to gather more, when eight million people rave frantically around the clock to power a city so bright it is blinding, when noise becomes as tangible a presence as gravity itself, freedom, painfully achieved so long ago, becomes a theoretical concept buried deep down below practical matters.

One is free to remain in the race and elbow a stressful way towards a finish line that eternally remains equidistant from the present, just below the horizon, or one can choose to drop out, slow down, take a side path and a long breath, find a peaceful way and stop to smell the flowers. What will it be?

The subtitle to this post is not insane, nor is it random. It was invented after a funny, disconcerting mishap in the middle of whole the Mandela saga. For those who haven’t heard – if that is still possible – the official signer at the ceremony seems to have silently spoken gibberish, through the full swing of he called a schizophrenia attack. A lot has been written on that matter and I will not tap into it, but you might want to read this irreverent story just for fun. 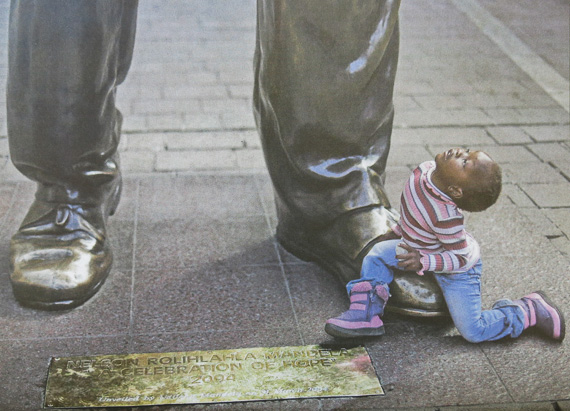 In the meantime, the picture above is reproduced from the Weekend Argus newspaper and it was the best I have seen in the last few days.

See you all on the other side of the pond. Pictures of flowers and ocean to come.