Looking for boats on an island that isn’t one

I recently felt a need for the company of boats. I was longing for the discreet dancing motion of vessels in a harbour, the sound of halyards flapping in the wind, the gentle splashing of water against hulls, the various ocean-tainted smells of fish and diesel and paints and fiberglass and cleaners, the squeaking of floating wooden docks, the screaming seagulls circling returning trawlers, the hissing chatter of VHF radios, the notion that each and every boat present has a long loving and sometimes desperate history with the sea…

So I headed down the Seawall and caught a False Creek Ferry across to Granville Island, the island that is attached to land. There, I bypassed Bridges and its trendy crowd and angled for the small shipyard where many boats slept, hoisted up on blocks, dry and frozen in time, 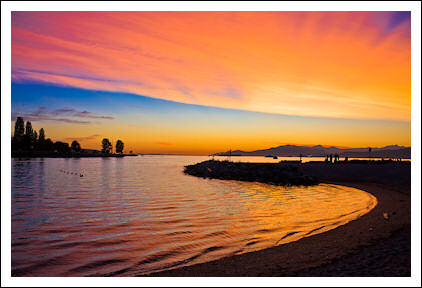 patiently waiting to be taken care of, fixed, scrubbed, sanded, painted, or maybe given maritime CPR.

It was late afternoon and not much was happening on the yard. I strolled around, carefully stepping over many obstacles and around protruding bows and engines, running my hands on freshly applied antifouling paint, remembering the many hours and days spent under the Caribbean sun preparing and painting our pontoon’s hull. We had our V-hull Banana Wind done professionally at Harbour House in Grand Cayman, but the 46 ft. pontoon was so light that we could pull it out of the

water ourselves and park it on blocks in front of the old hangar.

Hull maintenance is nothing glamorous. Depending on how long the boat has spent in the water and how good a paint job had initially been done, it might take hours to days to get a hull prepped for a new paint. Barnacles and algae have to be completely removed, then the old paint must go too. The new paint applied is called antifouling because it prevents, to a certain extent, marine life from attaching itself to it. Most hull paints ablate over time, but hence can be scrubbed clean as the outer layer wears off. But this stuff is highly toxic and requires precautions, including wearing a serious mask while painting. I’ve done the mistake of settling for a simple white dust filter and was sick for hours.

retrospect, all this hard work seemed so valuable and meaningful, almost like craftsmanship. It was driven by deep caring for our boats and the time spent initially would invariably yield proportionally lengthy years of good service.

Then there was all the work we did underwater at a mooring outside the marine park, inverted along the bottom of the boat, patiently scrubbing away while trying to keep our breathing down, or changing the sacrificial anodes, small blocks of zinc attached to the hull and ordered

to commit suicide by oxidizing first to prevent corrosion on other metal parts. There was the re-coating of the deck with a special paint into which we mixed sand to turn it into an anti-slip surface. There were countless hours spent on the engines, and working on the bilge pumps, and the electrical panel, and the radios, the GPS.

And there was endless, daily and repetitive cleaning, rinsing, shining and buffing of every surface above the waterline, as boats are among man’s creations which require the most maintenance to stay young and healthy…

The Granville Island shipyard is modest in size and relatively clean and fancy because of its location. It lacks

the usual stray dogs, the bustling activity, the skeleton-esk old boats abandoned on their blocks eons ago, the stains of paint everywhere. But it moved me and made my eyes shine. So I pushed on around the little bay to the fishing boat docks, and took a few shots of the city skyline.

On my way back, as I got off the ferry in the West End, the sunset suddenly fired up and I stayed on the beach for a while, my thoughts drifting far away in time and space. A boat, I thought, is more than a vehicle. Spend some time on one, learn to maneuver it, care for it, listen to its voice, feel its response, and soon it will become more than it was. It will begin to feel like home and a door will open unto another world. A world where we are explorers and conquerors all over again and in which a boat, like a sword, will really shine if handled well.