Last Thursday, at Marie’s suggestion, I got up at 6 AM to go watch giant balloons float through Manhattan streets. I wasn’t there alone. An estimated 3 million of my fellow homosapiens had converged on the city. We were a little cramped. Marie had stayed in bed.

Macy’s Thanksgiving Day Parade is the 2nd or 3rd largest in the US, they say. It begins at 9 AM and lasts about 3 hours, winding its way from mid-Central Park level down to Macy’s on 34th. Spectators arrive at dawn and camp on sidewalks to reserve a front-row spot. They bring makeshift scaffolds to elevate themselves above the multitude. They come equipped with cameras and warm clothes and thermos. And they wait more patiently than I have ever seen a crowd wait.

My plan had been to push on early all the way to the start line, to have a curious look at the parked balloons inflated the night before.

Once on the subway, however, I made a fatal mistake and remained aboard an express that whisked me 7 stations – or 50 streets – passed my destination. By the time I’d backtracked and landed at 72nd St, it was 8 AM and the incoming human flow was backed up all the way down the subway stairwells. Up in the street, there was a mob piled up against the intersection and no way to even approach the parade’s path.

I bailed. I was going back to bed. The most I would have seen of the event was hundreds and hundreds of participants lining up on the platform of various stations in their colorful outfits.

But approaching Times Square underground, I changed my mind. I decided to emerge, do a quick recon on the surface and if needed escape via the F line that could take me straight home. The crowds there were much more manageable, as we were half way down and hence much later along the parade’s path. I walked around the neighborhood for a while, negotiating road closures to find a proper photography angle. Finally, I settled for the corner of 41st Street and 7th Avenue, looking north. I was right at the front of a thin row of people facing a clear half-block of open space to the next corner where the 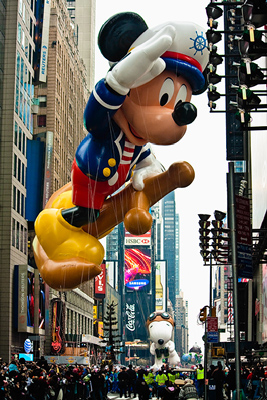 balloons, coming straight down towards us from the park, would turn east.

Then we waited. The gigantic balloons appeared on the horizon – 18 blocks above our location – long before they reached the corner, and long telephoto lenses sprang into action. The weather was overcast but rather mild and pleasant, the light subdued; a pale cloudy sky, however, made for a harshly bright background that would be hard to reconcile with much darker buildings and balloons.

Then for hours, the show went on and on, balloon after balloon. Eight thousand people were taking part in the parade, either controlling the helium-filled crafts or just showing off like people do at such events. I couldn’t really see them nor did I care. I was looking up high at the cartoon figures flying by neon signs and framing themselves gracefully between the long row of 7th Ave’s tall buildings.

Apart from a very annoying little girl (blame it on the parents) who kept sticking her fingers on my lens from her dad’s constantly moving shoulder, the crowd remained tame and civilized. Even the cops were in a seemingly good mood and well mannered. They appeared to 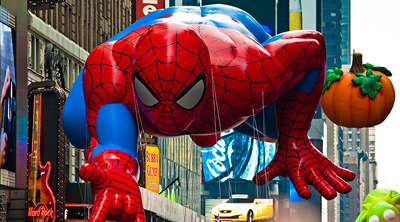 I made my exit a few balloons early to avoid the final assault on subway lines and found my way back to Brooklyn. Everywhere else, the city was still asleep, enjoying what in French we call "la grasse matinée". Back in the peaceful Cobble Hill ‘hood, I looked around me, surprised. Had I not seen it with my own eyes, I never would have believed that 3 million people were tightly packed against each other on sidewalks and street corners a mere 5 miles from me. It was as if the balloons had been a dream.

I pinched myself. It hurt. I’ll be smurfed, I said out loud, so I really did see a smurfly big Smurf in the Manhattan smurf*.

*Schtroumpf alors, j’ai vraiment vu un schtroumpfement gros Schtroumpf dans le schtroumpf de Manhattan. Let’s not forget that the Smurfs are originally from Belgium and speak French, in which language it is all much funnier.