It is no secret that the sky is where I long to be, airborne, aloft, high. But this is not another rant about how much I miss flying. It is much more simple, yet infinitely deeper. After living in Harlem for almost a year, I have realized how lucky I had been for the previous twenty or thirty years of my life to have had uninterrupted, continuous visual access to a wide open sky.

I had never until now taken the time to ponder the visceral need to look up and around, assessing weather, feeling immensity, watching planes fly by and chasing stars at night. I guess that luxury was taken for granted. But now that the morning sun barely makes it for a moment through the front windows of our apartment and that even outside on the back terrace, only a minuscule portion of sky is framed high between tall buildings, I feel the loss.

Looking up at the sky is such a primal thing to do. It is like taking the pulse of the world, assessing threat level, questioning the future and mourning the past. Of course when living near or on the ocean, or in all things flight-related, that assessment means life and death. But even when landlocked within an urban grid, with feet dry and wings clipped, I find so much information in the sky, along with sheer beauty, that missing it is like missing a large chunk of my soul, and as much freedom. 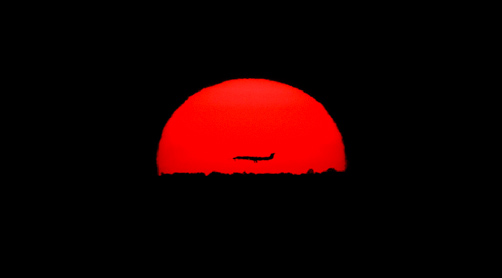 The few images below are winks at the past and the skies I enjoyed in my previous three pieds-à-terre. In Little Cayman, I lived right on shore at the very western tip of the island, facing amazing sunsets and with an unobstructed one hundred and eighty degree view of the sky. The island was small and flat, with barely any trees. The sky was everywhere, and once I was at sea, it merged into the water and formed around the boat a full sphere of powerful, humbling and ever-changing beauty.

Later in Vancouver, my fifteenth floor balcony opened widely unto the city and looking over the corner, I caught a glimpse of North Shore Mountains and more sky. Despite a high population density, downtown Vancouver was surrounded by so much pristine nature that the sky remained at the helm of any given day, even if only to pour a fine, cleansing rain down on the city.

And then there was our Brooklyn rooftop, accessed through an escape hatch, where the eye could wander from east to west, all the way to Jersey shores, with nothing but sky in between. We saw the Space Station in orbit, and also the Pan-STARRS comet, while lying on our backs on kikois, in the middle of an eight million strong ant nest called New York City.

Yeah. The skies are as moody and changing as the ocean, alternatively bringing misery and joy, rarely boring, never the same. But nowadays I spend too much time watching my steps to avoid filth and, like Gollum retreating underground, I have almost forgotten the presence of a sky-full of clouds, stars and planets above me, focusing at my feet and on them.

I miss looking skyward. But I am patient. That sky is not going anywhere. I know just where to find it.