When leaving work last Tuesday night, I reversed my usual route and headed north and then across the East River on the 7 train. I was meeting Marie at the Gantry Plaza State Park in Queens for a picnic.

While not as masterfully designed as our new favorite Brooklyn Bridge Park, Gantry is  nice and uses its rather limited space efficiently with the addition of a few jetties. There are ample wooden lounge chairs as I first saw then on the Highline, hammock-like swings mounted over cement-looking rubber ground for safety, a large playground and the old gantry cranes have been kept and now stand guard over the park like the tall rocks that Bilbo mistakes for trolls in the Lord of the Rings. 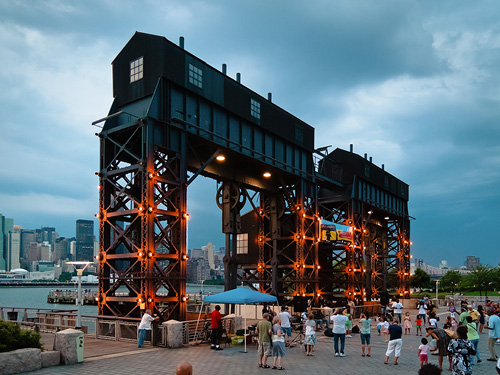 We chose a spot on the grass, laid our kikois and ate slowly while watching people, the impressive Midtown skyline and the sky, which was clouding over. A quick look at the weather radar on my phone revealed a few large storm cells approaching, but we hoped they would avoid us.

They didn’t. Within an hour, the sun – which had made a shy appearance – vanished completely, replaced by menacing dark clouds.

It was at about that time that we decided to try and catch the East River Ferry back down to Brooklyn. The handy smartphone was put to good use again and we realized we had just minutes before the last sailing. Hurrying around a vast construction area, we barely made it to the dock on time to catch the boat. By then, the sky had turned incredibly dark over northern Manhattan.

We climbed straight up to the outside deck and looked at each other as the Captain was reversing his engines. For a mere four dollars each and a bit of running, we had just bought ourselves a fantastic boat ride and a unique front row seat to what promised to be a stunning display of natural fury. 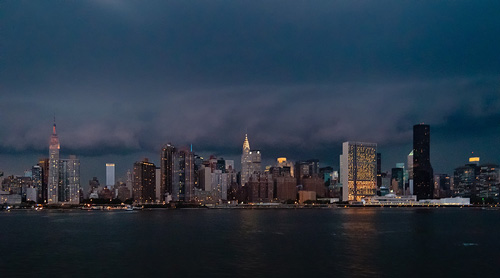 Storm over Manhattan seen from the East River Ferry

Within minutes, lightning was erupting behind the cityscape. Our cameras and many others went in action. Shooting in very low light, out in the open wind, on a bouncing boat doing some 20 knots, isn’t the easiest nor the most efficient technique…

But I think the snapshots, however grainy and blurry, speak for themselves. It was magical. For a moment there, I had a vision of Frodo and Sam lost in the land of Mordor. The light show was extraordinary yet there was a certain evilness in the air. By the time we approached Brooklyn, heavy rain began pouring and forced us to retreat inside.

When we stepped ashore, we rushed under the Brooklyn Bridge’s relative protection and waited for the rain to stop. 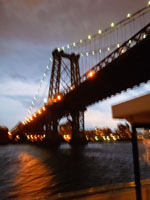