Sitting in a coffee shop, as the regular crowd shuffles in
Photoblogs, Vancouver

This is a re-post of a 2007 story. It remains of actuality and to this day I take pleasure curiously watching people’s routine in coffee shops, even though I am afraid that Vancouver’s laid-back and courteous lifestyle have been replaced by a vibe of aggressiveness and trepidation. That being said, even if New Yorkers drive like self-righteous maniacs to get to the coffee shop, they seem to suddenly relax once inside and become decent human beings again, for the fragile moment a few sips of warm liquid will span.

Seven in the morning.

The coffee shop is busy, filled with people on missions, leaving a trail behind them like silhouettes in a slow exposure. I catch glimpses of agendas, snapshots of the day to come, goals in the making. By the time they make it to the counter, most customers seem to have already awaken. They order with a vengeance. Ten adjectives and a please. Five dollars worth of ingredients in a tight, complicated sequenc 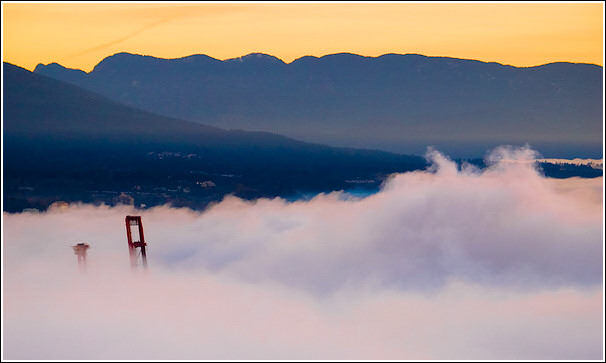 e in which coffee almost loses the crown. Then they collect their reward and most move on to the next port of call. There is little time to spare. The door swings open and closed continuously. Most beverages remain in their cup at that critical station but once or twice, I am gripped by fear at the sight of a dangerous angle, the absence of a lid and an obvious lack of a third arm to handle the exit maneuver.

Taking a long breath, I settle deeper into my comfortable chair and let the torrefaction smell soothe me. The drawing in front of me is coming along nicely. I have switched from my regular mechanical HB pencil to a plain wooden 6B and discovered we liked each other. If only I could draw… A few eyes stare sideways as they glide past my table, trying to see what is brewing, but they don’t really care; the nine o’clock meeting has taken control of their brain.

A man is reading the 24 Hours newspaper attentively, crouched forward in his seat—I think he’s on the taser story page. If he leans any further he will tilt and fall on his face. Nobody would mind in Vancouver, they would just look, mildly amused and then get back to their own thoughts. I remember coffee shops in Montreal that felt like war zones, under a coffee shop jungle law. There, you did not get up to go add cream to a black coffee once you had sat down. If you forgot the sugar, you would wince and tough it out. If the hot liquid was burning your tongue, you would do without a stirring stick and try to be patient. Standing up meant creating an opening and another lion would jump in and claim the space.

The milk and sugar counter is like a church. Most people line up to confess to themselves, orderly, patiently. “Four sugars, and cream? Say two I will skip sugar tomorrow’s.” “Had ice cream last night? Switch from whole milk to low fat this morning.” Some look uneasy, though. They seem to wish they could hide their recipe, either because it is 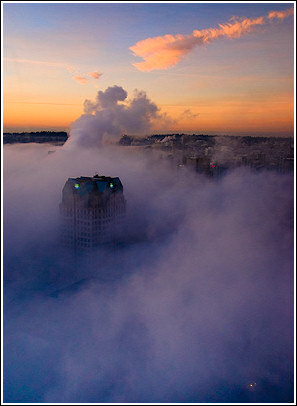 outrageously sweet, or because they consider it unique. They skip confession, glance nervously sideways and hurry the ritual, annoyed by the fact that someone behind them might turn the operation into a feast with the manners and ego of a great chef in his restaurant.

The only patch of sky visible between the corners of two adjacent buildings suddenly melts open and goes from milky grey to a pale hue of pink. There is fog in the air but the sun will be rising soon. I snap my drawing pad closed, pack up and leave hurriedly with my coffee. The tower is a couple of blocks away. I climb straight up to the observation deck on the inside elevator, no cheating, no preview. And then I am there, aboard an imaginary plane, cruising over an ocean of clouds at 35,000 feet.

Towards the west on the horizon, Metrotown and Mount Baker are clearly defined by the yellow sky behind them. The fog bank starts closer to downtown, triggered by the humidity of Burrard Inlet which it entirely covers. The North Shore Mountains are clear all the way down to the waterfront. The fog is moving by rather fast, away from its source and towards the hill of Vancouver West where it will dissipate. A few downtown buildings emerge from the low blur like giant sea monsters poking their head through the surface to spot their pray. Then they dive in a again.

And I have space for no more than six RAW pictures on my ridiculous 64 MB card. The Gigs are at home with Abe. I’ve only got the Canon G3 and it will have to do. Here we go.

You float like a feather
In a beautiful world