In need of exotic freshness, I once drew our public transit maximum range circle on a map, its centre pinned on our Brooklyn apartment. It turned out the most distant point I could reach aboard the MTA subway system was the very bottom tip of Staten Island, about 30 kilometres from home as the crow flies.

Staten Island is the southernmost New York City borough and it is also the emptiest. Served by only four bridges and a ferry, the island is awkwardly isolated from the rest of the world, both geographically and in (not so) popular culture.

Near the southern tip of Staten Island

Tourist-like round-trip ferry crossings notwithstanding, I had previously visited the island on three occasions. The first, in 2009, had resulted in a poison oak-induced ordeal that lasted over a month. The second and third with our friend Frank were recent and yielded beautiful autumn colours, shy salamanders and even a tick or two.

Then the doors closed squarely on her head and she dropped the mirror
So while my Staten Island fate has improved, I still venture unto the island with great suspicion and a touch of reluctance. However curiosity prevails and so, just last month, I conducted an assault on uncharted territory, and then revisited with Marie, walking some 25 km over three days.

I had picked as a target an area close to the end of the single open air subway line, 17 stations and some 30 minutes away from the northern St George station connecting to the Manhattan Ferry. The subway, which looks and behaves more like a train, is usually mostly empty but manages to be rich in colorful characters. On the first trip, a middle-age lady wearing a lot of pink and having had more than enough to drink in the morning – it was then early afternoon – was trying to touch up her make-up aboard the moving train.

Her efforts hampered by low light and the moving car, she stood hesitantly by the door while working in front of her pocket mirror. The train stopped in a station. The doors opened, and as the light was better on the dock, she leaned half way out, still applying her make-up. Then the doors closed squarely on her head and she dropped the mirror. I swallowed hard. The move, or rather the lack thereof, would have humbled even Peter Sellers. 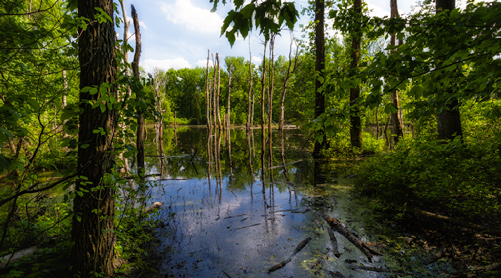 Getting off the train, I found myself near a heavily forested area on the edge of a conservatively suburban zone. My trusted Android phone guiding me via Google Maps, I crossed the woods – identified as a State Forest – on a wide path at the entrance of which Marie later found the following entries in the visitor log: “Question: What are you planning to do here? Answers: 1: Birding. 2: Dog walk. 3: Observe + enjoy nature. 4: Nature & shit.” Interpret however you want.

There is an odd, open area between the forest and a part of the park adjacent to the sea, that surprises the visitor with a school and church that seem unlikely to attract much local attendance. Further towards the shore, a road and a thick line of trees mark the boundary with the Mt. Loretto Unique Area, a vast and rather unusual section of beautiful grasslands inhabited by the highest concentration of wildlife I have witnessed in New York. 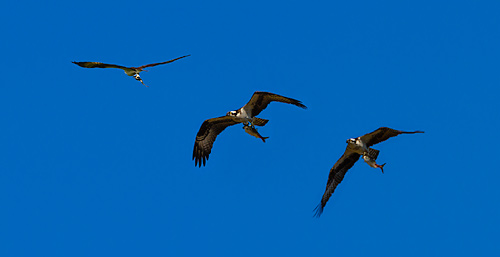 Composite shot of an osprey flying by with dinner in tow

In my three visits there, I spotted multiple ospreys – including two carrying fish, a handful of wild rabbits, a meter-long snake, multiple groundhogs and their young, a swan that flew right by me in a cartoon-like fashion, a couple of yellow-billed cuckoos having… well, having fun, an ibis, herons, frogs, ducks, geese, squirrels, entire flocks of sea birds – mostly brants, countless smaller species of birds I could not identify and a few baboons. Ok, just kidding about the baboons.

The shoreline is interesting without being stunning. Much garbage has unfortunately washed up and the cost lacks a bit of three-dimensional perspective, New Jersey barely drawing a dark flat line on the opposite side of the bay. But again, birds are everywhere, the vegetation is lush and the silence, one of the best I’ve experienced anywhere in the city.

I am splitting this in two posts. Stay tuned for the critters. For now here are the views. 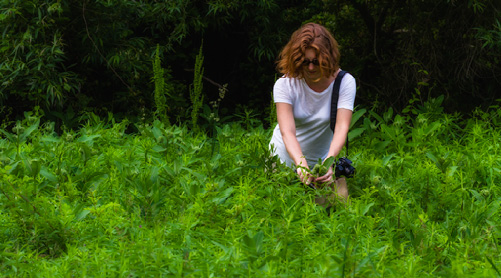 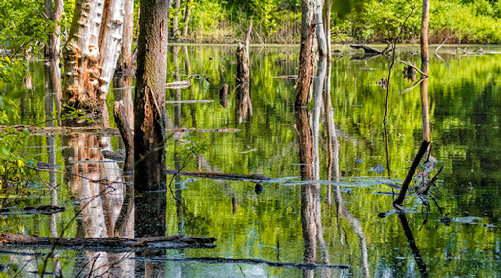 Taken as an osprey circled overhead, I actually noticed its reflection first 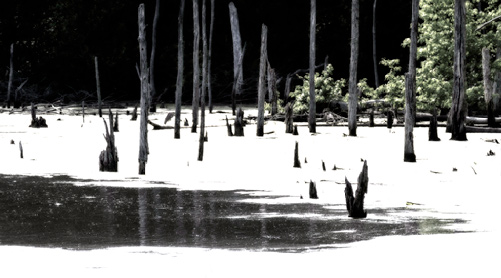 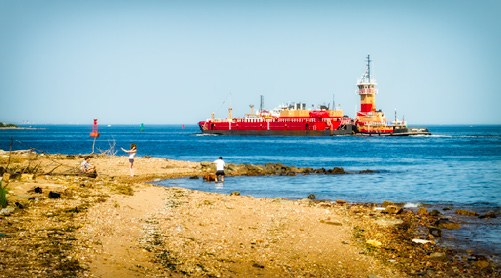