’twas the beginning of October. The American Princess was doing her last whale watching cruise of the season, in hopes of ending a run of bad luck seemingly associated with the passage of two hurricanes. Marie and I had been sitting on our tickets for 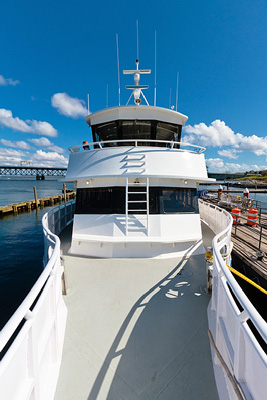 weeks and hopped on board on a sunny Sunday, along with some sixty fellow earthlings.

The vessel was a comfortable 95 feet in length, featured a canopy-covered upper deck and a closed main deck with tables and cushioned seating. We left the dock a few minutes past noon from Riis Landing on the Rockaways and headed southwest towards the mouth of Rockaway Inlet. Once the captain had made his customary welcome message and safety announcement, he throttled up and the three engines lazily took us towards open water at about 10 knots.

The plan as explained to us over the loudspeakers was to cross the full width of the New York Harbor approaches to New Jersey’s Sandy Hook, skim the long beaches closely in search of birds and maybe dolphins, then head straight out for a while and finally come back towards the Rockaways over the mud gorge, the beginning of an underwater chasm called the Hudson Canyon extending some 120 nautical miles towards the southeast from the mouth of the Hudson River and whose bottom is muddy and deeper than the surrounding sandy seabed.

“The sea bed, for a distance of nearly 100 miles off Bandy Hook, until a depth of 40 to 60 fathoms is reached, is composed of sand. In some places the sandy bottom has black specks, in others yellow specks, and again pebbles and broken shells are found in it. The continuous gully cutting southeastward through this bed of sand has a bottom of mud or clay. Near its outer or seaward end this is a green ooze mixed with sand. Farther in it becomes a blue clay mixed with some sand; but whatever the character of the bottom in particular parts of the gully, its general features are so different from those of the sand bed through which it cuts that there is no room for mistake.” *

In fact, the Hudson Canyon, over 100 miles long and 3/4 mile deep, is comparable in size to the Grand Canyon.

Storm over the mud gorge

It was great being on the water again, finally allowed to breathe fully and feeling the ocean come alive under the dancing hull. The air got chilly and while our day had begun on sunny notes, storm clouds gradually filled the sky and the water turned dark and moody. All and all, we navigated a wide loop of some 40 or 50 nautical miles.

Of dolphins and whales, we saw none. But the sight of a distant New York emerging over the waves like a fleeting mirage, its roots swallowed by the curvature of the Earth, was enough the make the day a mesmerizing one. 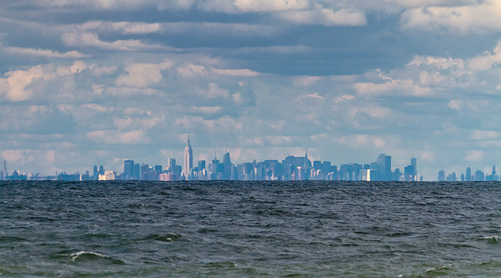 Midtown Manhattan from a whale’s perspective

Looking back at our hometown from the perspective of marine creatures, conflicting emotions arose in me: what an extraordinary achievement that city is, what a marvel of civilization. And what a dump. Literally. Because everything we dump there, year after year of a century and then another, unavoidably flows down to sea. The mud gorge, hundreds of years after it was so named, has turned into a sewage river flowing furiously down a doomed canyon.

The poor whales, if they ever visit, must carefully glide over the disgraceful flow like we avoid the puddle left by a dog on the street. Except our river-puddle is special. It kills everything in its path. And the place where it is pooling, eventually, will be full. We call it the ocean.