Always, On the road, Photoblogs

It was the Easter week-end. I had to get up at 3:30 am to get to Brooklyn around 7:30 pm. Such is the life of budget travelers.

When I arrived at YVR, Alaska Airlines’ computers were down. No ticketing, no check-in, no nothing.

I waited in a line that grew to a few hundred people – it would seem many of them were going to Hawaii. Yet I finally made it through US Customs and my plane only took off a half-hour late. Weather was bleak on the West Coast but I got a nice view of the Tsawwassen BC Ferries terminal and the mountains of the Olympic Peninsula shone in the sun as we were landing at Seatac. I made my connection.

Over at Newark, I jumped on the AirTrain to the main station and connected with New Jersey Transit’s train to New York’s Penn station. I like the train, it’s a very civilized way of commuting to and from the airport. No traffic, no mad cab drivers, no breaking at the last minute nor lane swirling, no TV ads, no fortune to pay.

At Penn, I emerged topside and walked over two 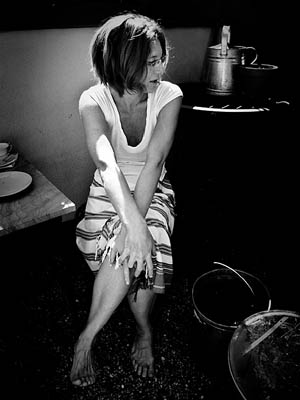 blocks east to the F subway line as the Empire State Building glowed in a beautiful sunset and thousands of people stormed the streets around Madison Square.

The F took me all the way to Brooklyn where I missed my stop and had to backtrack. The amazingly stupid thing with the New York subway is that you have to pay every time you exit and re-enter, even on a single trip in the same direction.

I walked briskly from Bergen to Henry street, passing by my little florist without stopping because I knew I’d be back and because at that stage, I couldn’t slow down even for a minute. Three flights of squeaky stairs, a deep breath, a cat miaow,

an embrace and I was home.

Marie beamed, the terrace had been hastily reformatted, there were flowers on the table, champagne on ice and a couple of very cute chickens in the oven. The big black cat purred and rubbed against my legs, getting more than his share of poultry. Time did its usual trick and managed to simultaneously come to a grinding halt while suddenly jerking forward and speeding up tenfold.

We walked and walked, and when Marie was busy with work, I walked some more, down from the Lower East Side through Chinatown and by the foot of both

bridges, and into Manhattan proper and around City Hall and then back up along Broadway. We revisited Central Park, walked around Brooklyn a bit, and also took a train north, leaving the Manhattan Island for the steep banks of the Hudson River.

There were ritualistic visits to Al di la and Sahadi’s, of course, Emiliano having sadly become rather invisible at the former but coffee being up to standards at the latter.

And, much too soon, I had to get up at 3:00 am again in order to get back to Vancouver, happy and sad, lonely but never alone, flying away for a moment and yet knowing that the distance will end, eventually. At last. 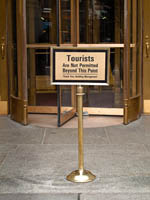