Not so Sleepless in Dubai

The Dubai layover was a disappointment. We arrived very late and by the time I checked in the airport hotel, it was 1:00 AM and my options had run out. 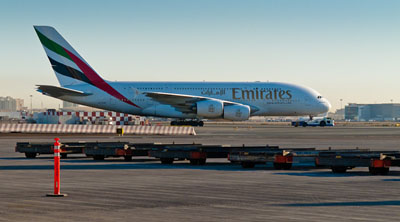 I’d caught a glimpse of the Burj Khalifa Tower beyond the right wing upon landing but it was now clear that the high-rise was going to remain out of reach. Subways were no longer running, it was too far to walk, and too late. I bought a few munchies in the hotel lobby, took a much welcome shower and collapsed in a comfortable bed.

Up at 6:00 AM, I gulped a continental breakfast in a large dark dining room, along with a few fellow passengers who were quiet, looked tired and possibly, like me, felt slightly out of place. As I waited for the airport shuttle, I glanced at the gigantic terminal that stretched across a few lanes of highway. At first glance, Dubai was all it advertised to be. Glamourously artificial, anonymously glittering. The airport was superbly impressive, a feat of grandiose modern architecture sized to accommodate the present giants of the sky, and even future ones. 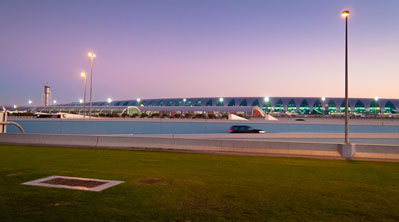 Everything looked clean and new and I had half-expected to find price tags left on things like we had at the Besotho resort of the Maluti Mountains.

The airport Holiday Inn had been internationally bland, neat and quiet, boring, ugly. Painted on the room’s ceiling, an arrow pointed to Mecca, only geo-cultural reminder in an otherwise sterile decor. To me, even more than Namibia’s Keetmanshoop had done so, this felt like the middle of nowhere.

The shuttle took us back to Terminal 3 through residential streets lined with highly fenced, luxurious houses and their BMW’s and Humvees.

The plane to Cape Town, a Boeing 777 this time, was on time. As I walked down the long terminal towards my gate, with at my left huge duty free shops filled with crowds in serious spending mode and at my right, Emirates’ flagship long-range jets, Boeing 777-300ER, Airbus 340-500 and 380-800, I felt so disconnected that it seemed as though I had never landed in the first place… I had a smile thinking about Robert Merle’s hypothetical Madrapour.

We took off on schedule and turned south with 7650 km remaining along the east African coast. Later on that flight, the ride got a bit bumpy and we were given the opportunity to observe a very funny Emirates cabin crew procedure. Whenever serious turbulence was expected – and after the seat belt sign had already been turned on, the Captain would make a brief announcement: “Cabin crew, take a seat.” They obeyed instantly, not bothering to return to their crew seats and sitting

wherever they were, including on a passenger’s lap if nothing else was available. That happened a few times and I had to bite my tongue not to burst out laughing when I noticed the face of a big guy across the aisle with a male flight attendant squarely seated on his lap!

I watched more movies, made sure to get up and stretch regularly and let my thoughts run adrift. Of Dubai, I had merely seen the shell, touched its surface without getting a feel for the inside. And yet, as I flew high above Central Africa, my instinct told me that there had been nothing more to see or find. Maybe that shell is filled with oil and nothing more. (Pun intended.)

But on this last day of the year, South Africa lay ahead and there, I knew, the shell is full and layered with intricate levels of complexity, beauty, joy and sorrow. A Pandora’s Box, mine to explore and maybe understand, some day. With much help.

Happy New Year to all, peace, and fun. 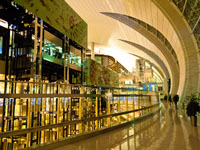 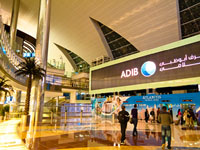