NYC Ferry to the Rockaways

New York City’s coastline, mixing lazy stretches of carefully orchestrated public space with the capriciously winding expense of nature turned to steel, clocks in at an amazing five hundred and twenty miles of intricate playground for anybody who is tuned to the presence of water. For the sake of comparison, the combined coastlines of Boston, Miami, Denver, Los Angeles and San Francisco cannot match the length of ours. Yes, I threw Denver in there for fun but it has no statistical weight.

Tens of thousands of years ago, a glacier tore through the Hudson Valley and left a convoluted geological mess, which much later must have appealed tremendously to the first European settlers who discovered a nautically easy to defend, narrow opening into a vast array of flat and sheltered colonisable land masses with all-around ship access. Readers be warned though, I am neither historian nor urban planner and base most of my colonization knowledge [sic] on the tiles and tides of SimCity and Civilizations. ‘nough said.

With such an amazingly diverse collection of shorelines, water being a daily reality in the life of New Yorkers and a major economic factor, pondering how few aquatic commute options were available in the Big Apple has always puzzled me. I estimate that some fifty percent of the city’s eight million souls live within a mile of water, and that ninety percent of them are within four miles of it!

Yet there had until recently been only three and a half major players competing in the nautical commute arena with a modest schedule to very few destinations: NY Waterways ferries crisscrossing the Hudson to Jersey, East River Ferries and Water Taxis dancing a ballet on the East River – the latter only partially committed to commuting hence the half, and Seastreak drawing broad strokes across the Lower Bay to Sandy Hook. 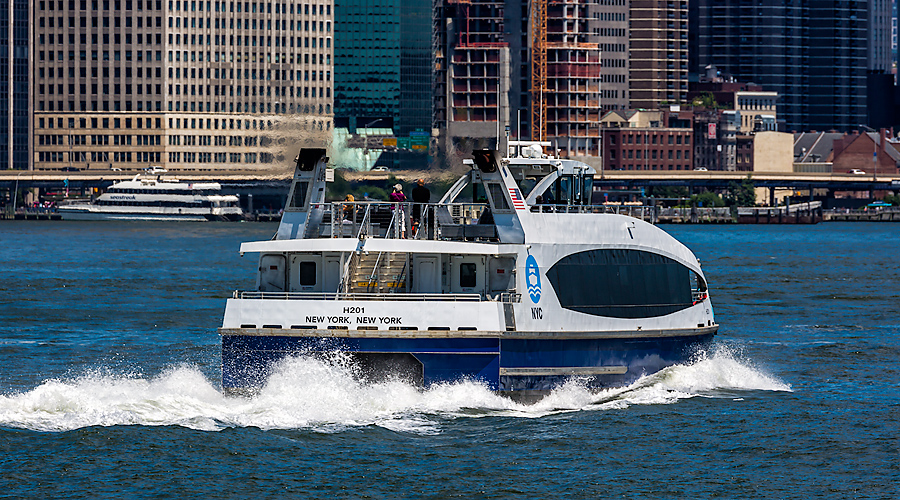 So the morphing of East River Ferries into the sturdier, city-subsidized NYC Ferry is a welcome strengthening of an otherwise disparate fleet and it has added quite a bit of traffic to the East River and the New York Harbor, its southeastern-most stop being the Rockaways. After serious media coverage and an instant public adoption that led to the million passenger mark being reached a month ahead of schedule, I recently decided to catch a ride and test-drive the system.

I love boats almost as much as I love planes, which is to say a lot. I spent a large chunk of my adult life on dive boats of various kinds, from the late Banana Wind and her twin 225 HP Mercury Optimax outboards, to Club Med 2’s majestic five masts, shallow draft and slick silhouette. So from my currently grounded – as in stuck rather than stable – urban existence, hopping aboard a ferry is a literal breath of fresh air and a splash of salty spray into my daily routine.

Marie being chained to her manuscript, I shouldered my photo backpack that day and walked down to Brooklyn’s Pier 6, intent on reaching if not the faraway India, at the very least the almost-as-far-away Rockaways.

Now, the new NYC Ferry operates by river sections, so I knew in advance I would need to transfer somewhere. The Android app on which I had purchased my ticket said I would be headed backwards to Manhattan’s Pier 11 first, to then go south to Brooklyn’s Sunset Park and finally, through the Verrazzano Narrows, on to my destination. 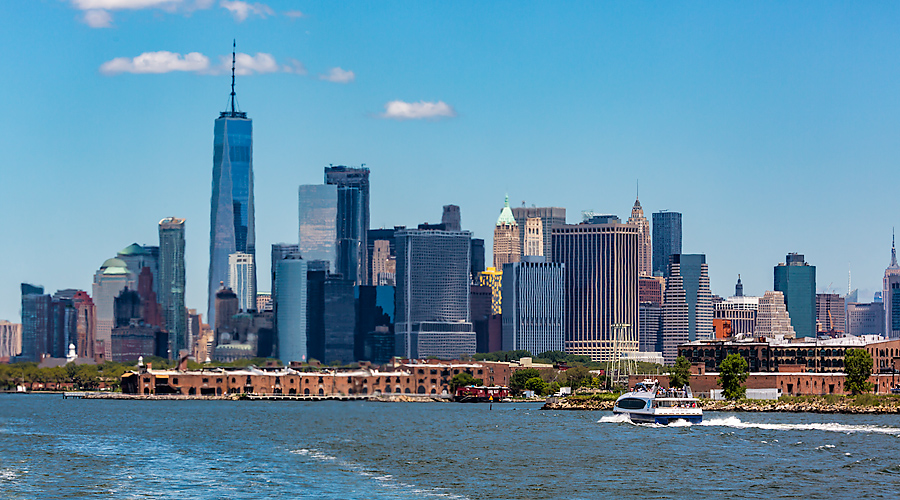 Leaving Manhattan behind in a heat blur

Upon reaching the Pier 6 terminal, I was greeted by a sight I had heard about and dreaded – a long line of people waiting to board with umbrellas, coolers and towels. Undeterred, I took my spot at the back and observed. The ferry was boarding already, bikes being let on first, then pedestrians, everyone ushered aboard by a crew that was quite on the ball. To my surprise, the boat swallowed the line like a hungry predator and I soon found myself presenting my digital ticket at the gangway.

The attendant looked at it and as I was activating said ticket with my thumb, he urgently tried to warn me: “No, no, no, don’t!” It was too late. He explained in a hushed voice, “This isn’t us, it’s the other guys, but I’ll let you on anyway.” Mystified, I followed his pointed arm to another docking ferry and realized I had picked the wrong boat. Backtracking, I stepped aside in shame. There were maybe five people waiting with me. I couldn’t believe my luck. Shame has its charms.

Once aboard the correct vessel, I zoomed through the air-conditioned first level, past a bar, and up the stairs to the open upper deck. My camera came out of its bag. Lines were cast. The horn blew three short blasts. Diesels shook the deck and our wake churned. Fun had begun.

It turned out the first ferry had been going to Governors Island just across the channel, and so did we, the new schedule obviously still mystifying even its makers. Then we quickly sailed south, stopping in Red Hook and then Sunset Park, where I got off to wait for the Rockaways-bound boat.

Yes, that’s a golf course in the middle of a commercial harbor. Only in Jersey.

As I stepped onto the long concrete dock, one ferry was casting off and looked rather packed, but many people remained in line ashore in a fiery sun. A few minutes later a staff member walked up the line explaining apologetically that he had radioed in the fact that so many customers could not get on, they were sending an ‘extra’. My eyebrows arched.

The extra soon arrived in the form of the large, extremely fast Seastreak, a jet-propelled twin-hull catamaran that most famously services New Jersey’s Sandy Hook across the bay, but also was involved providing relief transportation to the Rockaways after hurricane Sandy. The two companies must have agreements as my $2.75 fare would get me all the way there.

I had never been aboard the triple-deck vessel and was surprised to find that while the two covered decks had comfortable, air-conditioned seating, the upper deck was mostly empty. Empty of seats that is, but full of passengers who had simply laid their towels down and sprawled as though already at the beach.

The Seastreaks wear their name well. They are fast (there are multiple boats but I refer to them all as a single entity). I tucked my hat in a pocket in fear of losing it and found an empty spot near a handrail to steady my relatively heavy telephoto lens as we cruised through New York Harbor at some forty-five knots.

Shorelines were busy, beaches sardine-packed. I personally would not swim anywhere within a fifty mile radius of the city but a lot of folk do, generously oiled and exhorted by the blare of ghettolessblasters.

Coney Island at the peak of summer

Aboard a ship one becomes a bit of a voyeur, watching the world go by without being involved, those poor stranded people’s lives displayed for all sailors to see. I divided my attention between shore, skyline and airspace, as JFK traffic was darting around us. Luck brought in three separate specimens of the mighty giant which systematically makes me gasp, the A380.

Upon reaching my Rockaways goal, it was mid-afternoon already and the steady flow of beachgoers nailed my adventure coffin. I had no desire to bathe into an ocean of flesh and sand. Stepping off the boat, I turned around and got back on it.

In Sunset Park, luck ran out and the boats to Brooklyn were full. I would have had to aim for Manhattan and fight a huge line there for a boat home. Weighing my options, I bought a chocolate-dipped ice cream on a cone from a circus-sounding truck, lapped wildly while it melted in the sun, and decided to bail to a subway. Minutes later inspiration struck and I whipped my phone out looking for a bubble car. There was one half a block away. Done deal and lazy way home, the futuristic way.

But back to the water. The images below reveal an impressive diversity and portray a less familiar side of our eight-million soul metropolis. Yet whether they are hidden beaches, quaint waterfront houses, green and lush wild marshes, coastal amusement parks or lesser known bridges, these spots almost always share the iconic Manhattan skyline as a backdrop, like a mother towering above her children at play.

The point is, all of the pictures in this post were shot within NYC’s city limits and depict it, with the exception of a few shots of Jersey.

Reminder to myself: self, look around and stop complaining, it could be much, much worse! For only daily water to contemplate, billions of people have but a tap or hose. Millions more do not even have that luxury. The blue planet is only so colored for the lucky few. For most others, blue is a dry joke.