She doesn’t visit New York very often. But Queen Mary 2 is a transatlantic ocean liner, not just a cruise ship, and her lineage thus compels her to choose the glamorous Big Apple for port of call once in a while. 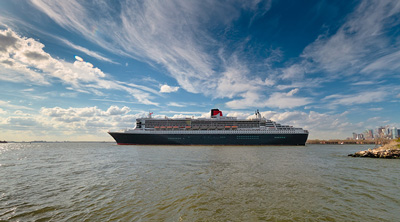 If the distinction was lost on you, let me explain: cruise ships are just huge floating tin cans built for the sole purpose of packing people up and displacing them on the water, pardon the pun. Ocean liners, on the other hand, were meant to serve as true transportation vessels, traveling from A to B, or C. Not too many liners remain in service, as oceans have long lost their supremacy as worldwide avenues. The sky is now where people flock when going places and weeks of buoyant migration have been shrunk to mere hours in flight. 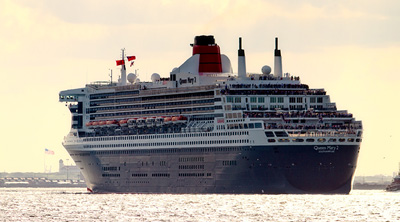 Queen Mary 2 sailing away from Brooklyn

Flagship of the Cunard line, Queen Mary 2 is powered by a combination of diesel engines and gas turbines that supply the electric propulsion system and cater to the massive ship’s remaining electrical hunger. And with fifteen restaurants and bars, five swimming pools, a casino, a ballroom, a theater and a planetarium, hungry she is.

Granted, her New York visit is most likely part of a transatlantic cruise rather than true ocean liner business. But it was a pleasure to see her high bow slice through the New York Harbor waters as she departed her Brooklyn berth this week, and I found in Red Hook the perfect observation post.

Next to me at the end of the Louis Valentino Jr. Park jetty, a local fisherman was blabbing to others about his hobby long before the ship appeared – and continued long after she had faded into a late afternoon sun. His line remained still the whole time. But he watched it like a hawk, talked about the tides (which he had wrong), the size of normal catches (which he seemed to grossly exaggerate) and a recent baseball game. I don’t think he even noticed that something large and beautiful had gone by. 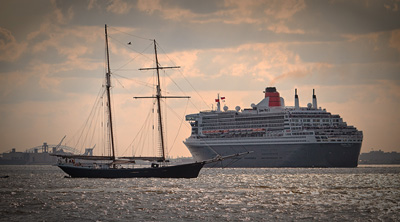 Both ends of a spectrum

What can I say? Not everybody ticks to the sight of ocean-going giants. Not everybody has felt the rocking of high seas, where nothing familiar manages to break the mercilessly drawn expanse of an infinite horizon. Some people, I know, feel actually quite comfortable on land and would not trade that stability for anything on Earth.

But you see, that’s the thing: nothing on Earth compares to being at sea. Except, maybe, being airborne. But that’s another story.