Of Flying and Fate

After watching a simple Smithsonian documentary about a group of weather scientists teaming up with pilots to fly around storm clouds in an effort to understand them better – and almost shedding a tear myself along the way – I must confess: I am rarely happier than when I am airborne.

Here’s the rub: I have spent the last twenty years with my eyes turned skyward because, as Da Vinci put it so simply, “there I have been and there I will always long to return.” 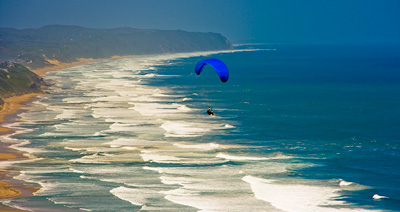 So maybe the time has come to re-evaluate my fateful acceptation of these wasted three years of government-paid aviation training; a commercial pilot licence which I obtained with honors but failed to put to good use because of a badly timed aviation-wide trough, post-adolescence immaturity and the lack of financial resources to last the extra mile. After a few years of a decreasingly hopeful struggle, I brushed it all aside thinking that it it was not meant to be and accepting my fate the best I could.

But there is no fate, wrote Sarah Connor. And flying still runs through my veins, undiluted. Eventually, I flew again. Hangliders, sky-diving, re-did my twin-IFR, got a U.S. PPL, and finally found paragliding.

I have had few role models. Among them were a handful of mountaineers, the likes of Reinhold Messner and Maurice Herzog. And then there were pilots. Saint-Exupéry, Mermoz, Blériot, Lindbergh, Yeager. Pilots used to be poets. Seeing the world from above provided them with a wiser perspective on earthbound miseries, liberating them from the obligation to participate. Many wrote and did it well because they saw the world with their heart. To some extent, I believe this is still the case. Modern flying has become highly technical yet its philosophical value remains impossible to ignore.

Heights and the need to avoid gravity’s sensuous pull usually keep life simple: you fly or you die. Back on the ground, this translates into you live or you die. Thus far fewer pilots forget to live than the rest of human crawlers.

What I learn from an updraft can turn me from an earthworm into a bird, and gets me as close to hypothetical angels as I ever will be. It makes me soar above the daily pettiness and understand it all, me included, a little bit better. It helps me rise above the mud bath and remember that, far below, they are struggling. Whether I join the struggle back or not is a simple matter of awareness; gravity might eventually prevail, but my soul doesn’t have to yield.

The faint glow of a weather radar while flying far above the ground in the darkest night is about as romantic as I can imagine life to be. It means that I am committed. That I am responsible for my actions and choices. That while directions are being issued for me to stay on the right path, the decision ultimately remains mine: should I stay or should I go?