Of genius and its consequences

Recently surfing the web on the StumbleUpon waves, I came upon an old photograph. “Oh, I said to myself, an old photograph.” The photo was just your typical black and white old shot, early 1900’s, with a bunch of guys in suits and ties, posing for some photographer. Big deal. And I was about to ride away when my eye caught a familiar face. So I looked closer and started scanning the scene. Wow, another known face! Let’s see how many I recognize. Grumpf. Only two. Then I looked at the names and recognized a few more.

It turns out the photo was a rather amazing gathering of some of last century’s greatest scientific minds. The year was 1927, the place was Brussels and the event, the Solvay Conference. They had gathered there to discuss the newly formulated quantum theory. It is at that conference that Einstein said “God does not play dice.” Seventeen of the twenty-nine present already had or would eventually win a Nobel Prize. It was, literally, a meeting of genius. 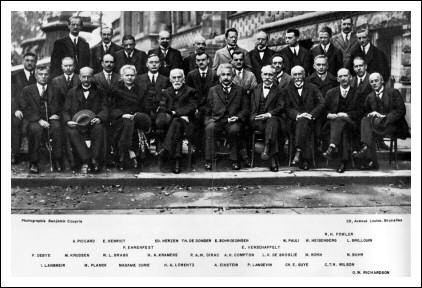 The photo’s legend puts names on faces but here are the most remarkable to me: Auguste Piccard, upper left corner, was a physicist, aeronaut, balloonist, hydronaut, and builder with his son Jacques of the amazing

bathyscaphe Trieste which reached 35,800 feet down in the Mariana Trench in 1960. It was a world record of deep diving that I believe has never yet been matched. But more importantly, Piccard inspired Hergé’s memorable character of Professeur Tryphon Tournesol (Professor Cuthbert Calculus in English) in the Adventures of Tintin.

Schrödinger was a physicist who contributed his cat to quantum physics, as I illustrated it in HDR photography meets quantum physics. Heisenberg with his uncertainty and Neils Bohr were at the heart of quantum and nuclear physics, on opposite sides of the bloodstained war fence. So was Plank, too, and he gave us his constant as a bonus. Marie Curie was, well, she was Marie Curie. Pioneer in the field of radioactivity with her husband Pierre. And then we come down to Albert Einstein. Now, I couldn’t say anything meaningful about him unless I wrote none-stop for 10 more pages, so I won’t even try. He was Einstein. He was funny. He was bad in school. He was brilliant.

And all of them, for better and for much worse too, have contributed to shaping the world as we know it. Theorists and physicists are always behind the discovery and implementation of our evilest weapons of mass-destruction. Can and should they be blamed for it? It’s not an easy question to answer. A lot of good comes from advancing science. So how do we stop the morons who have military power to tap into research and turn it to their advantage? Maybe it can’t be done. Scientists have an ego, too.