Of photography and mathematics

I once hated maths. I was so bad at it that I had to see a tutor outside of my school time. But time passed and I improved, having been given the lucky privilege of an extra school year while transiting from a country to another. College came and I juggled happily with the basics of trigonometry, differential and integral calculus, and other wonderful buggers. And then I forgot it all. Such is the usefulness of our school years. (Don’t get me started on that…)

However, maths is all around us and once in a while, as adults, we run into it and suddenly remember an old friend. It’s happened to me quite a few times recently and I’ve decided to write about it because, not so surprisingly, it was photography that yielded the happy encounter. As both a technical and artistic field, photography is a good breeding ground for numbers and rules.

The number 3 has always begged for rules. Maths has its Rule of Three. That much I have remembered and I use it all the time in high stress situations. “If one black cat eats 76.4 pellets in 55 seconds, how long would it take him to eat the standard 50 pellet ration?” Scuba divers too have a Rule of Thirds. One third of your air supply to go, one third to come back, one third as a reserve. Granted, that’s a worse-case scenario, for penetrations and deep dives.

So sure enough, photographers and artists came up with their own Rule of Thirds. It’s the mother of all composition rules. To be broken with moderation but enthusiasm. After all, as the crew of the Black Pearl would say of the “Code of Parlez“, it’s a more of a guideline… Still. The Rule of Thirds… rules. If one divides a typical canvas or photographic composition in 9 rectangles formed by the intersection of two pairs of equally spaced vertical and horizontal lines, four focal points are obtained at the intersections, dividing the scene in three equal vertical segments and three horizontal ones.

The Rule of Thirds claims that a well balanced composition will place its main subject on one of the four focal points. In addition to making the image aesthetically pleasing, this method creates a virtual dynamic path by making our eyes travel from the opposite edge to the subject, and back. The Rule of Thirds is at the Composition 101 level. To the point that I think every digital camera should have an option to superimpose the lines on its LCD screen.

Then there is the much thicker Golden Ratio topic, referred to by the Greek letter phi (?). Two numbers are said to be in the Golden Ratio if the sum of the two is to the larger what the larger is to the smaller. Got it? Come on, you gotta keep up, here!

Ok, it’s harder to visualize and it involves maths more directly. But it’s an appealing ratio that suppresses one of the lines in the Rule of Thirds and brings the focal point of a photo slightly closer to the center, working well for scenes that lack an abundance of secondary subjects and/or depth of field. And more interestingly, it’s also closely associated with the Fibonacci Sequence. Ah-ah, now I can almost hear the crowd going “Oh” and “Ah” and “Of course, Fibonacci!”. Indeed. Hollywood has a curious manner of pulling obscure themes out of a geeky hat and throwing them out into the spotlight and popular knowledge overnight; so just as Lara Croft brought Léo Délibes’ Lakmé to the masses while dancing on a high wire, Dan Brown’s Robert Langdon introduced the world to the Fibonacci Sequence and hence, I just awoke you by finally mentioning a concept you’d heard before.

I very much doubt, however, that walking out of the theater you rushed to the public library to open an encyclopedia. So Fibonacci probably ended up in your mind alongside many Italian pasta names. Let me clarify, then. The Fibonacci Sequence isn’t a complicated notion – it’s the implications that are endless. The sequence in itself is a series of numbers, beginning with an arbitrary 0 and 1, and each following number being the sum of both previous numbers in the list. It goes like this, to infinity: 0,1,1,2,3,5,8,13,21,34,55,89, etc. That’s it.

Now let’s turn this into an image. Imagine that we draw an invisible square (it’s the 0, duh.) Then a visible one, one unit in side length. We draw another, same size, adjacent. Then we draw another with a side length equal to the 2 previous added, and we keep going, like this:

This is called a Fibonacci Spiral and it is virtually identical to a Golden Spiral (obtained by a logarithmic spiral whose growth factor b is related to ?, the golden ratio – Wikipedia dixit, blah-blah-blah.) This is also where things become interesting from an artistic point of view. Let’s superimpose the Rule of Thirds and the Fibonacci Spiral. First of all, one of the focal points of the Rule of Thirds coincides almost exactly with the origin of the spiral:

Then we notice that the curve of our spiral manages to lead the eye through each of the Rule of Thirds’ 9 rectangles except the central one, which once again, doesn’t need the extra attention. There is a smooth transition from the outside edge, a quick exploration of the image and a final tightening of the focus into the main subject. Perfect. And the path can be followed back out, too.

Now the trick is to actually build a photographic composition according to these rules. It so happens that the shot below works pretty well, but it was pure coincidence. Entering the scene from the top right corner, the eye travels down taking in the tree and pond, finds the goose, leaves it attracted by the boots, starts inspecting the girl and finally centers onto her adorably focused expression. 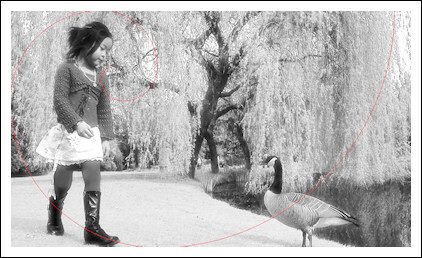