Some of you, if visiting Coriolistic Anachronisms this morning between 5 AM and 6 AM Eastern Standard Time, will have found the blog down. I apologize for the inconvenience, here is what happened. The failure was not at the level of my awesome hosting provider, MDD Hosting, but rather a global, network-wide outage over at the equally awesome Cloudflare.

I have been using the services of Cloudflare for a few years now, and with the greatest satisfaction. With a combination of CDN, optimization  security and analytics, Cloudflare speeds up and secures my website, for free (there are also paid plans, of course).

This morning, in response to a DDoS attack, the folks at Cloudflare implemented a bad rule and in real time, all of their 23 worldwide data centers’ edge routers crashed. The outage lasted less than an hour in my case and in as little as 30 minutes, things were coming back online.

Cloudflare, as always, was very honest and transparent about the cause of this issue and the measures taken to remedy it. I think that apart from a few trolls out there, everyone using their services truly appreciates their efficiency.

To keep things in perspective, here what my uptime looks like even after this failure: 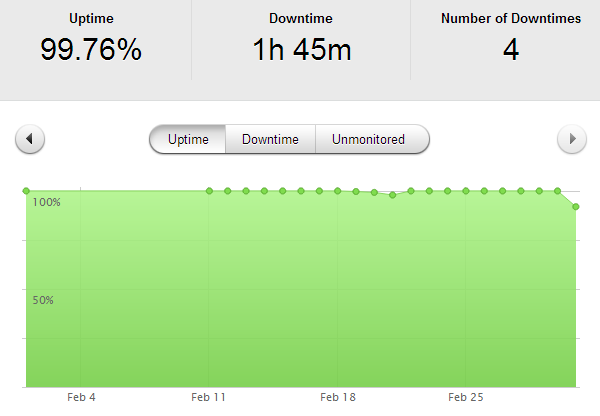 That looks pretty good, and keep in mind that my checks are scheduled at 15 minute intervals, so the extra 45 minutes of downtime are due to the delay between the checks for 3 other short outages that were probably only a few minutes long each.

So in the end, the whole thing was a glitch, albeit a serious one. But it raises one very, very important question: what will I do if and when the internet fails? I mean fails for good. We have weaved our lives so tightly around the internet that we depend on it for every single aspect of our existence. Communicating, work, entertainment  research, education, news, services, finance, and most especially creativity (as in this blog), you name it, it’s all internet-based.

The moment only matters as much as its potential for epic storiesOf course a return to nature seems like the cure-all. The internet could not matter much to one living at the foot of Table Mountain, right? Let’s just go for a long hike and find disas. Well unfortunately, it’s not that simple. Our web addiction involves the replay and story-telling of our lives. We have given up on privacy and started broadcasting our lives out loud, through the social networking of Facebook, Twitter and the likes, through blogs, websites and through emailing our peers.

I don’t honestly know if I am still capable of enjoying Table Mountain as much without a camera, without the perspective of writing about it, and showing it to the world. The experience, it seems, has become dependent on the later recount of it. The moment only matters as much as its potential for epic stories. If going on vacation and told that regardless of the fun we’d have, it would all be forgotten once we get back home, would we still go?

So what will I do if this all goes away? Would it be the end of civilization? Granted we probably thought the same of electricity when it appeared, and yet it is now taken for granted. The worse outages have lasted weeks, but they pass and we recover.

It is clear that our urbanized lives are more threatened by such failures than those of rural folks, and poorer ones. So should civilization fail, maybe life would be carried on by the Third World, by those very cultures we are trying so hard to eradicate. I can picture a conversation between herders isolated in a high-altitude Besotho rondavel: “The what has failed?”