In a little over 24 hours, the eyes of the world will focus on a single football, as an estimated* half a billion fans watch the FIFA World Cup final live from even the most remote corners of Earth. No broadcast event on the planet manages to capture the interest of so many people simultaneously.

I personally think that FIFA is too large a beast, probably rotten by corruption and in the simple business of making sheer profit. If as little as 5 percent of the advertising time it sells to major sponsors for what must be astronomical sums was instead given to charity organizations with an international scope – or, why not, to those serving the continent in which the Cup is being played – then some real good could come from the event. It should be the duty of any highly successful enterprise to give back to society, as much for a balance in operations and avoidance of the capital sin of greed as for simple and effective self-promotion purposes, and I believe that FIFA could shine better at this.

In any case, South Africa has been receiving more worldwide attention in the last few weeks than ever before, and that should be a good thing. The country will now have appeared in the awareness of many who previously ignored it and stands to gain from exposure and the success of a brilliantly hosted Cup.

But there is so much more to South Africa than frantic 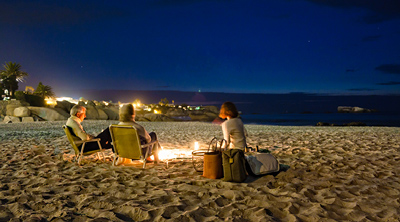 crowds in a stadium pulsating to the sound of vuvuzelas. It would be a terrible mistake for any World Cup spectator to so limit their exploration of a newly discovered country. I hope that those who attended in person will have gone off the beaten path and sampled the less traveled roads and beaches. I hope they will have strolled and walked and hiked. I hope they will have smelled the flowers and tasted the sea salt, and enjoyed wonderful food and superb wine. I hope they will have taken in the crisp light and absorbed the peace.

And for those who visited through a TV set, may their imagination and curiosity be tickled into picking up a South African novel, watching another documentary, Googling the origin of a word or even, why not, toying with the idea of a call to the travel agent.

South Africa is a land of extremes, and while not everything is rosy and pretty down there, I know of very few places anywhere on the globe that will fill the traveler with such a sense of wonder and amazement.

Here are a few snapshots of a wonderful family picnic on 3rd Beach in Clifton, the same beach that saw Marie and I drinking Champagne on a memorable afternoon two years ago. It has a sweet spot in our hearts, of course, but truly is a beautiful enclave of sand and ocean, nestled at the foot of Lion’s Head, a few minutes from the heart of Cape Town.

Now let the game be fair and may the best team win.

* Half a billion is a very conservative figure taking into account the recent admission by FIFA that their previous numbers may have been largely overestimated.