On our way to the Karoo, we make a ritual stop at the lovely farm
Karoo Trip, South Africa, Stories

Having spent a few days in Constantia, we leave Cape Town on August 16. Our road trips have unfortunately shrunk in scope and hunger, starved by my worsening lack of time. From the full-fleshed, epic adventures they once were, they have mummified into short, frantic dashes to the end of a relatively short but surprisingly elastic escape leash. It lets us spring out at high velocity and enjoy a brief timeout at the apogee, life standing still for a few precious moments, motion nullified and peace setting in as shoulders relax and stress evaporates, and then we are yanked back to where we started, rougher, faster and hopelessly precisely.

Deciding to take the long way out, Marie at the wheel, we hug Table Mountain’s imposing mass down to Muizenberg where a sharp left leads us east, on a lonely shoreline road sandwiched between the vastness of False Bay on the right and the sheer poverty of the Cape Flats to the left, the latter hidden behind sand dunes but sharply splintered in our minds as we drive towards a luxurious retreat.

We ponder the ocre color of the sea along a beach where people are painstakingly pulling a fishing net in by hand, the old-fashioned way. It is tempting to assume pollution is behind that deep brown hue, Khayelitsha lurking just beyond the dunes. But a natural cause could also be involved, whether an algae bloom or sea monsters foraging in the shallows. Further offshore though, the ocean turns a deep comforting blue and white caps rise to meet an equally blue sky.

The road eventually abandons shore and landlocks itself towards the north and the mountains. A few shipwrecks rise out of the heat in the distance, forever stranded on the dry grounds of major film studios, their holds filled with the gold of a film industry whose riches never trickle back down to the townships which surround the area. Leaving Cape Town behind, we cross fertile agricultural lands and arrive in Stellenbosch, formal gateway to the South African wine scene. Just beyond town rises the first escarpment of the Hottentots-Holland range. We cut through its lowest arms, taking a shortcut away from the main road.

Marie waves to the left. “Somewhere over there,” she says, “is Ida’s Valley, the house of the first Viljoen, a Frenchman I am descended from, who might have been a Huguenot.” I nod appreciatively. I owe the guy much. 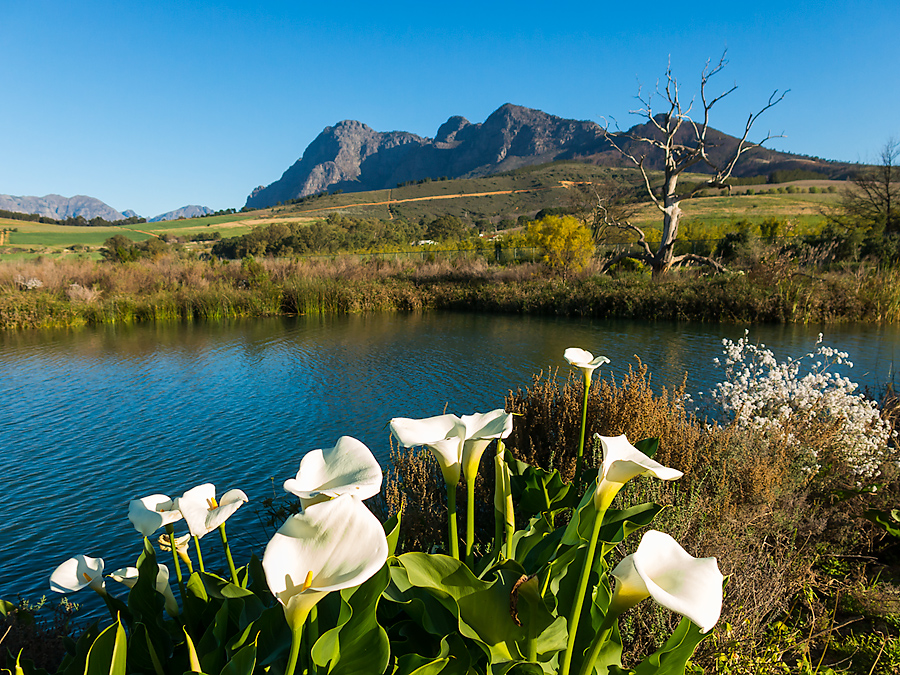 On the other side, we find the road to Franschoek and Paarl. This is still prime wine country, and up in the hills, leopards likely roam. We turn north towards Paarl and its funky rocky pearl, but soon we branch off again, to the left, on an expertly-maintained rust-colored dirt road. We have reached our destination for the day. It is my third visit and second stay at Babylonstoren.

In a world of failures, fakes and fiascos, Babylonstoren is a fresh sample of things done right. We used it as a last stop, to freshen up and transition smoothly back to civilization, on last year’s Namaqualand trip. This year, it opens an even shorter escape, and while we could easily have driven none-stop to the Karoo, we could not resist the temptation of such a perfect combination of plush luxury and exquisite beauty. So we will stay long enough for the planet to revolve on itself twice, and watch the sun dance through the sky as many times, full circle. Two outrageous nights.

Punching through the gate check by dropping a reservation name, as if the Landcruiser did not speak for itself, we are welcomed and waved through. I briefly consider mentioning to the guard that the adorable driver next to me is a descendant of the François Viljoen who planted his cabbages1 over the mountains back in 1682, but I wisely opt against that after remembering that said guard might not even have enough cabbage to eat to this day.

We park Mogashagasha and walk to reception, knowing – and dreading slightly – that someone will shadow us back to dutifully fetch bags and carry forth. Such is the cost of luxury. James Bond always does so much better than us, in similar circumstances. He lets bags be hushed, doors opened majestically and interiors beheld with a grace and knowing smile that skilfully soften the weight of his mighty tip. We just stand there feeling awkward. But then again, we will replace the martini with a G&T, definitely not shaken but stirred, and the most lethal weapon we carry is not a Beretta but a Bialetti – for which we have, unbeknownst to us, forgotten the funnel, the actual coffee holder. 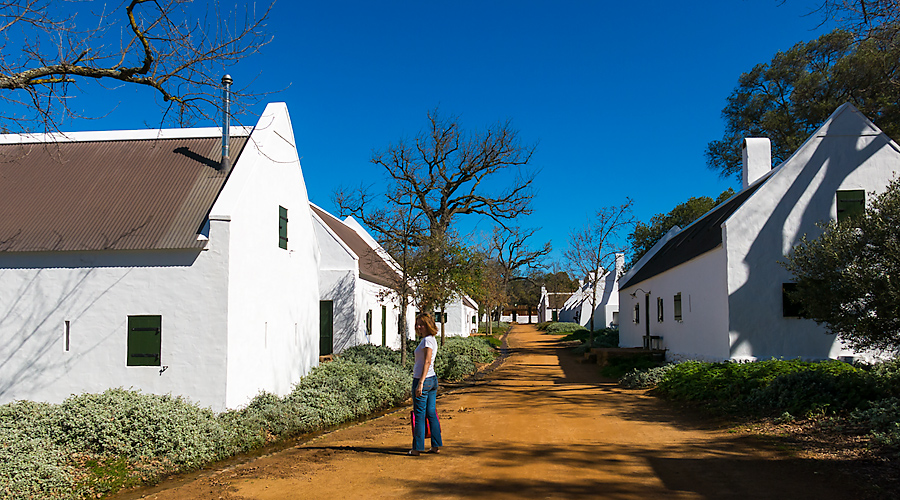 At the reception desk, we are professionally acknowledged and grafted the assistance of our host slash tour guide slash luggage handler, but a surprise comes when the clerk, after double-checking the name he has on file, informs us – or rather Marie as she is the Viljoen – that so-and-so was hoping she could join us for breakfast. Would ten o’clock do. Yes, it will and we shall be honored. Surreptitiously, Marie and I glance at each other. I shrug. It must be the marketing team. We were, after all, again offered press rates.

Back at the car, I make a point to carry my load of luggage to the room, participating not so much to diminish the forthcoming tip than to lessen my tourist complex. We are given the usual speech on farm activities, in a friendly, competent tone that reminds me of Club Med days. For years, I escorted arriving travelers to their room, bungalow or cabin, an acceptable trade off for my scuba diving duties as the Club’s pawns were moved daily where they best served the game.

We have a slightly smaller cottage this time, which means that it doesn’t feature the second bedroom we had scored, and from immense, it is downsized to perfect. But the style and even the decor are the same, and we smile at the sight of a welcome fireplace, the good old kitchen glass walls, wi-fi, heated floors, enormous bathroom and War and Peace and Eilande on the bookshelf. Fresh fruits from the orchard are on the table, and a couple of bottles of house wine is ready for tasting. 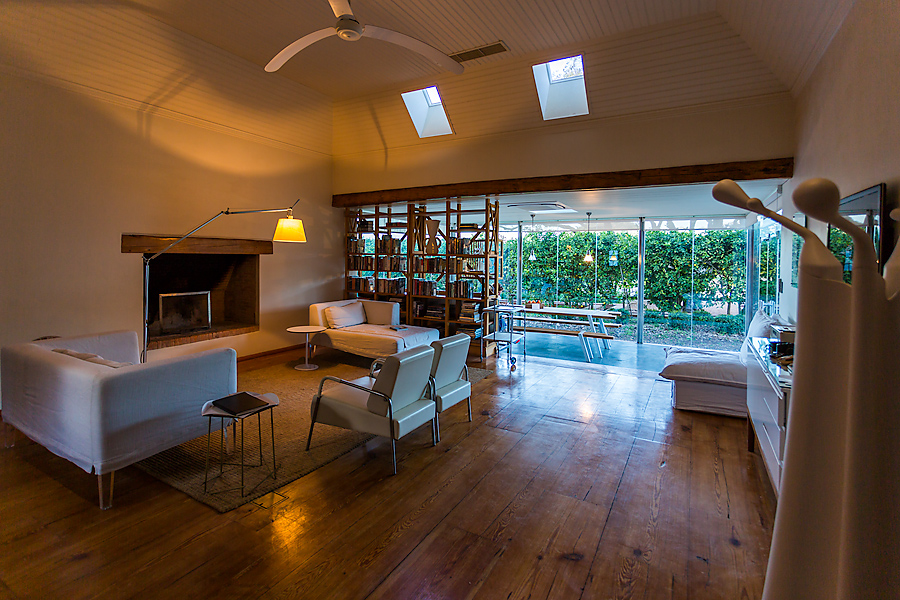 Tipping out of the way, we take deep breaths, unpack, explore, survey, clicking here and switching there, and we plot our afternoon. Cameras in hand we then stroll through the garden, Marie’s eyes darting left and right like mine would over a coral reef, on high alert, each plant a discovery, on every leaf a message.

Then we grab a couple of courtesy all-terrain bicycles and, struggling with jumping gears and weak brakes – they have obviously taken a beating – we venture out of the garden proper over a small stream flowing through a thick shady row of lush trees, and cross vineyards towards a koppie, small rocky outcropping that promises barely a sweat but surely a view.

We cycle along the vineyard perimeter all the way to a dam that turns out to be a pleasantly isolated and beautiful patch of water, with a boat shed, kayaks and a small island reached by crossing a wooden bridge. And no one in sight. 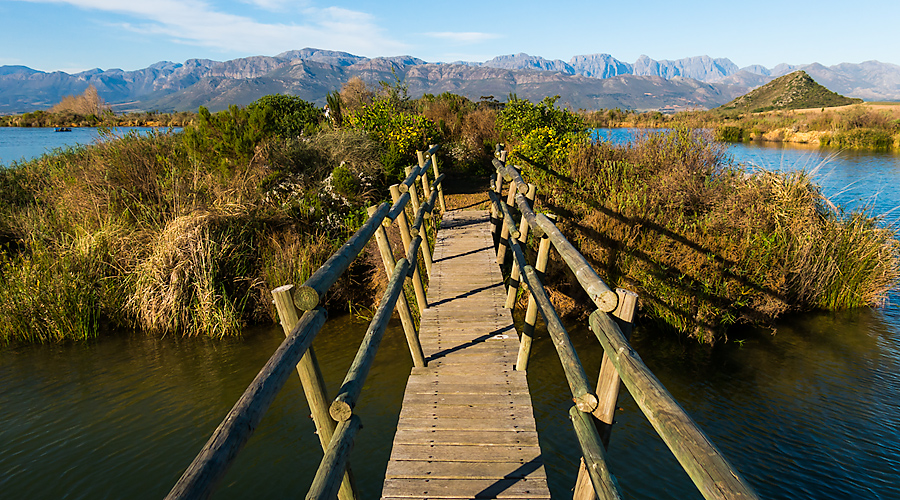 Back at the cottage we relax for a while and graciously receive, without surprise this time, the pre-dinner appetizers from the kitchen that are handed door to door, barn-style, then we freshen up and walk to the main restaurant. No communal pizza for us tonight, we eat at our own table and are able to speak in hushed tones and enjoy our food without being blasted from both sides by conversational shells of questionable taste.

Nighttime silence is absolute. Up at dawn, I let Marie sleep a little longer, make coffee and walk around the garden, breathing deeply and enjoying the moment’s perfection.

Later, we are met at breakfast by our date who introduces an app and unveils a poster. Business out of the way and our stomachs full, we head back, on foot this time, to the koppie. We are watched as we approach by a few brave dassies guarding the rocks, but when we show no sign of fear of death by marmot bite or simple crushing2, they retreat strategically and the ascent is ours. A narrow path circles its way to the top and from there, the eye wanders through panoramic views from the farm grounds all the way to the mountains we drove through, in a slightly hazy afternoon that reminds me of a trail run in Mpumalanga.

Having decided to eat dinner by ourselves the second evening, we visit the shop and buy homemade bread, cheese and dried meats along with quail eggs, then return to the garden where Marie picks fruit and vegetables with absolute delight. One of Babylonstoren’s strokes of genius is to allow its visitors to help themselves in the garden. Radishes, beetroot leaves, onions, arugula, nasturtiums, pea flowers, purple lettuces, lamb’s quarters and blood oranges complete our menu and are whipped into a delicious salad by my own chef. 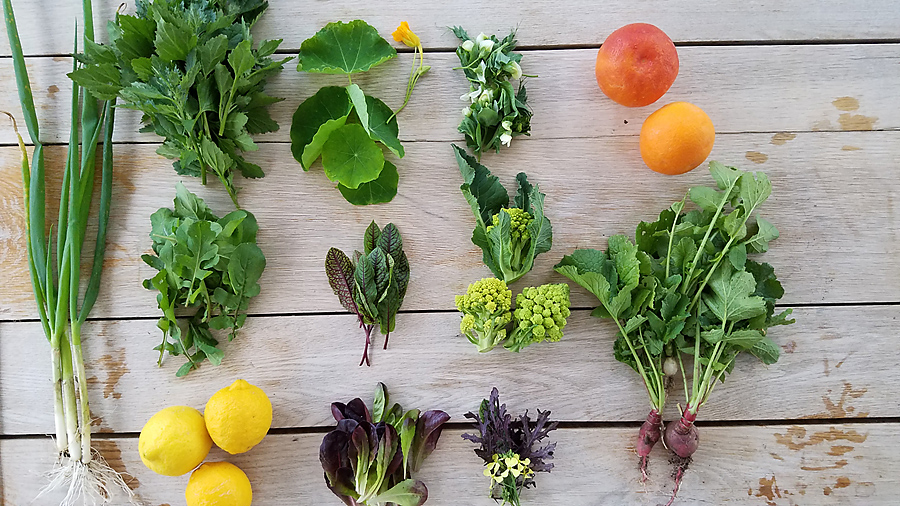 The second morning, we have a nice and quiet breakfast and, a couple of eggs and sausages strong, we check out and hit the road. Or rather, we caress it. There is nothing violent about getting under way for another leg of a journey. Dreams are alive, courage is back, resources replenished, the heart open and the mind inquisitive, bordering tolerance. Mogashagasha3 purrs happily for us, we ease into a rhythm, and open curious eyes.

That hunger, however, prevails as we slice our way through monotonous Karoo emptiness, past old landmarks such as Matjiesfontein where we had stopped on the 2008, barreling down a much improved N1 at over one hundred and twenty kilometers per hour, fingers crossed and eyes alert. I imagine deep space to be very much like the Karoo; extreme temperatures outside managed by the vehicle and nothing do to but watch the gauges, wait, think, and look at your reflection in the glass.

We eat biltong and dried fruit thingies, drink Ceres juice which is made just around the block, talk in the kitty’s voice, and, ever so slowly, Prince Albert grows from a dot on the map to a tangible target. Tonight, we will sleep in complete isolation on a remote corner of a fig farm, with no electricity and no lights but candles and the stars. This, after all, is South Africa, a world of cruel beauty and deep suffering where I still manage to be whole4.