Roasted in the Namib, Part 2 – Namibia begins in Aus

Waking up by the Orange River the next morning, I glanced at South Africa on the opposite shore and launched into my breakfast-preparation ritual, only to find that our gas burner thingy was too large to accommodate the cheap but larger stove-top espresso maker we’d acquired at Woolworths to spare the wonderful Bialetti. Fiddling with the top of a metal Illy Espresso can, I managed – thanks

to my Swiss Army knife – to manufacture a ring that would support the coffee maker. I lit up the burner, put my coffee on the flame and waited, seemingly forever. My makeshift tool began to darken and smell horrible, probably because of the metallic paint that was covering it. Then Marie suggested I simply use the braai grill that had been threatening to jump in my face. Now I was awake.

The first brew failed, I’d taken it off and put it back on too many times. The second failed too because I managed to tilt the espresso maker and water spilled into the wrong chamber. I was getting grumpy. On the third try, we got a few drops of very average coffee. Things were looking up. Barely.

Taking the tent down and packing up turned out

to be a lengthy procedure complicated by the necessity to fit everything back inside the car exactly the way it had been done initially, because that was the only way it all fitted. The campsite had an electrical hook-up and our fridge had remained plugged in all night, keeping all frozen meat quite frozen. We hit the road around 9:30 AM and headed west and then northwest on C13, the small dirt road we had picked up just after the border.

The Orange River would stay with us for quite a while, distant at times and very close at others. It brought an incredible fertility to the valley and we found vineyards in the most surprising setting, isolated in the middle of a perfectly harsh and hot country. The temperature was already high but with the air conditioning on and a careful application of suntan lotion on our arms and shoulders, we were rather comfortable.

Eventually, the environment turned into an almost lunar-like landscape. Heat and dryness were the two only constants here and they would stick with us for many days.

The road was still dirt (and would remain so for 2000 km with a few exceptions) but it was very manageable and allowed us to drive at speeds ranging between 60 and 100 km/h. We never saw cars going in our direction, and meeting an oncoming vehicle was extremely rare but lifted a huge cloud of dust that would drop the visibility to nothing for a few seconds.

Marie and I being who we are, there were many photo stops. She ticks mostly for flowers and vegetation, and I, for landscapes. Landscape shots were everywhere, one more beautiful than the previous, and things would keep becoming more and more dramatic as we proceeded north. But surprisingly enough, even in such an inhospitable climate and desperately barren soil, there were plants all around – small, rugged, brave plants that survived from the tiniest trace of

water, going for months at a time without rain, if not years.

The C13 rode the northern bank of the Orange River into the Richtersveld and Ai-Ais National Parks, each in its country but managed and operated jointly in an effort to promote the continuity of very similar environments. To the north of us on a different road, was the Fish River Canyon, said to be one of the deepest in the world. But at this time of the year the poor Fish River, which we eventually crossed, was as dry as a piece of old biltong.

About 150 km from our departure point, we reached the very strange town of Rosh-Pinah. Of an obvious mining origin, the town seemed either young or reborn and extensive new housing developments suggested recent activity. We wondered if diamonds could be at the origin of this flurry of construction since we were on the inland edge of a very large coastal diamond restricted area. Beyond Rosh-Pinah, the road towards the main B4 was extremely well paved and quite new. Mysterious large trucks were going back and forth with unmarked cargo. Further research revealed that we had been wrong: our mythical diamonds were in fact simply zinc.

We headed north, relieved to take a break from the tortures of our Landcruiser’s rather rough suspension and relishing the hypnotically smooth pavement

that lead to Aus.

Aus was a surprise, and wasn’t. Nested into orange rolling hills marbled with enormous granite boulders and slabs, the very small town had a cute church, a gas station, a hotel – and a pretty praying mantis on said hotel’s steps. Marie was charmed by the sight of a lady polishing the leaves of a plant and I, by the fact that we were almost there. We followed directions to Klein Aus Vista, where we were to camp. It turned out to be a delightful little lodge, well isolated from the road and with its campsite even further into the hills.

We unpacked and pitched, already getting a rhythm. As Marie has said it, the site had been neatly raked, everything was clean and the ablutions block showers – a quintessential feature when the temperature soars in the upper thirties – were quite welcoming. Later that night, sitting by the glowing coals of our braai and sipping red wine, we agreed that we could have stayed there longer. But the road was calling and morning would see us head away from comfort and into the edges of the

I walked around in the darkness and marveled at the stars. My dear Southern Cross was flying high, like a kite in the sky. I found Canopus and Achernar, drew an equilateral triangle towards an imaginary point sent by the cross, dropped down to the horizon and there was south. As always, my thoughts were drawn back to 1993, the South Pacific, five giant sails in the night. I smiled. This was so different, and so much the same. The southern hemisphere has a way of making one feel alive. And this time, I wasn’t alone. 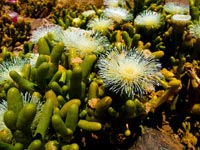 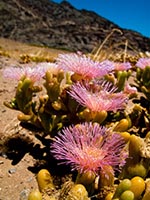 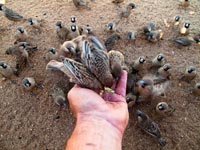