Roasted in the Namib, Part 4 – Sossusvlei, or taking the pulse of the oldest desert on Earth

Sossusvlei lies in the middle of the Namib Desert, 60 km west of its port of entry, a tiny outpost called Sesriem, and another 70 km from the coast. This is a place where heat prevails, where sand is king and ruler of a magical, changing world. The Namib is said to be the oldest desert in the world, dating back over 55 million years. Its record-high dunes have turned burnt orange as iron in the sand oxidized over time.

Vlei is an Afrikaans word for pan, and indeed, every few years, 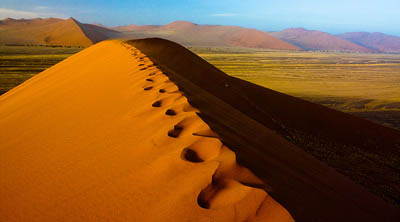 the rains flood Sossusvlei’s clay bed through the Tsauchab River in a surprising display of natural anarchy. Between these exceptional events, the only water found on the vlei or the dunes is that carried by visitors. It is a land of thirst and incredible dryness. But the sheer beauty of the dunes and their constantly changing colors, as they react to different light and weather patterns, turns such harshness into a mesmerizing kaleidoscope.

Access to the vlei isn’t that easy. The closest place to camp is Sesriem. Being a National Park, the 50,000 km2 Namib-Naukluft is fenced off and protected by gated access. In Sesriem, the gate opens at 5:00 AM and closes at 8:30 PM. There is no overnight camping allowed, so in order to be on location for sunrise, one must imperatively be at the gate by 5:00 AM sharp and drive hastily to the end of the road.

Surprisingly, that road is paved. Because nobody seems to take the posted speed 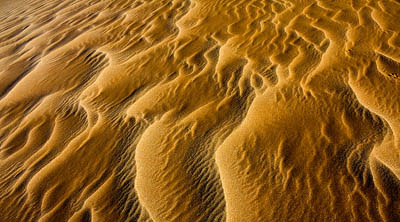 limit of 60 km/h too seriously, driving it takes less than an hour. However, the pavement ends before the vlei. There remain a few kilometers of very deep sand track to be negotiated by 4 wheel drive vehicles only.

When our turn came to venture into the park, I had set the alarm on my watch for 4:15 AM in order to have time to prepare coffee in the dark and wake Marie up gently, and still make the gate at 5:00. When I woke up at 4:45, I bolted upright and had to admit I’d missed my wake up call. Coffee would have to wait. I shook Marie up, she bravely fought sleep away from her eyes and we fumbled to get ready. We hit the gate around 5:15 AM, showed our access permit and were let through in complete darkness.

A couple of headlight sets were dashing through the night far ahead and eventually another set appeared far behind us, but for all practical purposes, were were alone. Despite the perfectly tarred pavement, I had to be vigilant for animals – proof once again that 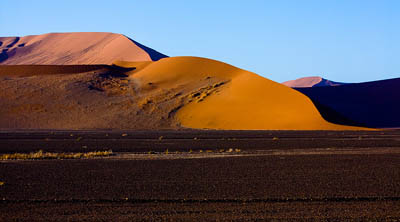 even the meanest desert shelters some form of life. Two rabbits, a jackal and a few bokkies ran away from our lights. I stuck to 80 km/h not to push my luck and when eventually the sky began to pale behind us, we had covered good ground.

Our first stop was at famous Dune 45, long before sunrise. Located about two thirds of the way to Sossusvlei, the dune comes just about flush with the road and offers an incredibly easy and inviting path into the desert. Its sharp spine rises steeply to the south, away from the valley, and starting to climb along the edge, one is immediately humbled by the vastness of its scale and the steepness of the slope. The problem with sand dunes is that you have to choose between going barefoot, which to me seemed a little silly and yielded worried thoughts about buried scorpions, and keeping your shoes on – which I did – and watching them swell up as they fill with sand. In no time, it felt like my shoes were 4 sizes too small. 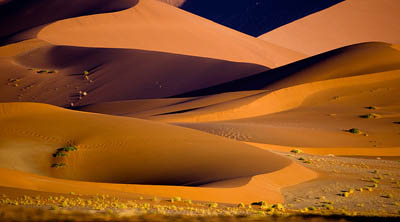 light was improving, still very soft and pinkish, slowly revealing the world around us and unveiling its crushing beauty. A few early risers had preceded us up the dune and a few more arrived later. Dune 45 had just been written up in South Africa’s Go! travel magazine as the best first morning stop and indeed, it was a magical sight.

But Marie and I left a little before sunrise, pushing further into the valley. I didn’t think we were missing much from a photographic point of view. The actual sunrise and sunset moments don’t do it for me, they’re too fast and involve far too much contrast. We got to the end of the pavement and followed signs into the actual vlei. Immediately, the path turned into deeper sand than anything we’d seen until now and driving actually became a little tricky. I was careful not to slow down too much in the deeper parts and waited to stop for photos where rock or clay came close to the surface.

The parking area was right 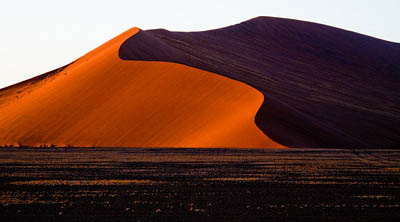 next to the pan and a few 4×4’s were already in the shade of big trees. The sun had come up now and heat would be increasing rapidly but we still wished we’d brought our coffee maker and stove. Marie opted for a low walk on the perimeter of the pan and I headed up the main dune. She soon called me back to show me not one, nor two, but four owls in a short tree. Again, life was everywhere.

Then I went back to my climb along the curved edge of the dune above us. There wasn’t much wind at all and I could already sense the temperature difference between the shady area down below where Marie was still wearing her sweater and my location on an exposed ledge. I took a few pictures of sand creatures, a large beetle and some funny, very rapid lizards.

As I reached the sharp summit of the dune, I met a couple in shorts and scandals. They were coming from the opposite direction and we exchanged polite pleasantries, unable to break the ice in such sizzling heat, all of us probably humbled by the scenery and feeling like we didn’t belong and were trespassing. We negotiated our way past each other carefully, not because of 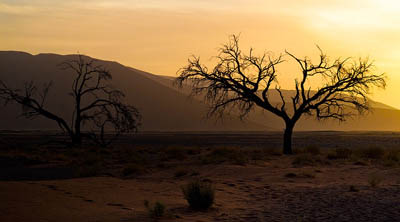 the narrowness of the ridge but to avoid adding unnecessary footprints to the slopes. They headed down slowly and then, at last, I was alone.

I felt like I had just fallen off the face of time itself. Bouncing in my mind were many half-forgotten history and geography classes, and as many books and movies I’d fed my dreams with throughout the years. It all came down to this moment, so simple and yet so expertly carved by the chisels of destiny and chance. This was Africa. I had sand in my shoes. The woman of my dreams was down below extricating the smallest beautiful details out of a magical fresco. The desert all around was fiercely frying my skin – because it was meant to do so – but secretly chilling me 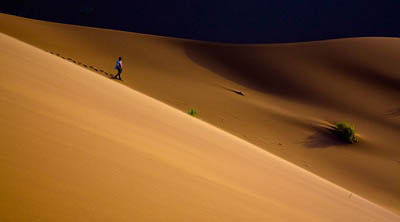 to the bone, reminding me how old and powerful it was and how insignificant I’d remain, long after having returned to civilization.

Mine was a moment of triumph, of utter victory over nothing but time and abstract obstacles, one that I wouldn’t be allowed to take home with me. It had to be lived through and left behind for someone else to find. The best I could do was freeze it in stills and attempt to collect samples of the heat and extraordinary play of light and shadows and tones, in digital bits, for later.

I sat down on the edge of the dune with my back to the sun, camera in hand, eyes lost on the heat-blurred horizon. This, I thought, had to be the reason why explorers and pioneers are what they are, and why they keep going despite bitter suffering and unfair sacrifices. It is only by pushing the limits outside that one eventually catches a glimpse of who’s hiding inside. And then the dream becomes, dune after dune, wave after wave, rope length after rope length, one difficult step at a time, to understand it all. 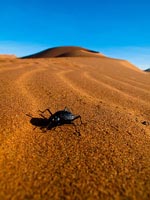 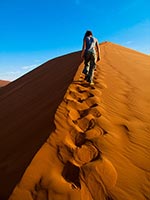 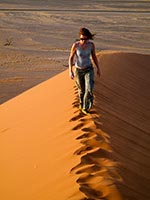