Roasted in the Namib, Part 7 – Back to so-called civilization

Leaving behind us such amazing places as the Namib and the Kgalagadi turned our drive south into a bit of an anticlimax. We aimed for the town of Upington through which our old friend the Orange River flowed on its way towards the ocean. There too, the water’s presence drew a singular line of luxurious green vegetation across deserted and dried-up plains.

We followed the river westward and eventually reached good old N7, the same road that had led us up to our first border crossing. Heading south this time, we continued to our next stop Kamieskroon, in the heart of flower country. Of course summer isn’t a time for bloom and I had to content myself with Marie’s colorful descriptions, trying hard to picture the current harshly brown and morose land in her dress of sparkling colors.

The small town of Kamieskroon was asleep and wouldn’t wake up until the spring. It lives an ephemeral glamorous life in September each year when people pour in from the four corners of the world to come and witness an extraordinary abundance of flowers that transform arid landscapes into Van Gogh masterpieces. The rest of 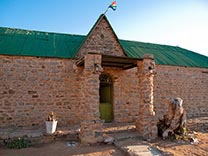 the year is a long, dull and hot hibernation.

We checked in at the only hotel where a single car stood parked and got the receptionist to make a reservation for our dinner at some restaurant, as seems to be custom in small South African hotels. The other guests turned out to be from Quebec – what they were doing so far away from home, lost in Kamieskroon off season, was a puzzle.

In the evening, we got in the Landcruiser and carefully followed directions to the restaurant. We got there fast. Marie and I frowned and looked at each other. The hotel was less than 300 meters away. We could have walked over. This was a strange world.

There was nothing on the outside of the old stone barn identifying it as a restaurant, nor were there any cars in front or even signs of life. 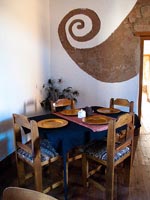 We drove around to the large courtyard in the back and found one small car. Things were improving. Then a lady leaned out through a half stable-style door and waved. “Hi,” she said, “I was waiting for you.”

She was the owner. She was the waitress. She was the cook. She had opened the place up for us. Marie and I would be her only customers for the evening. We sat at a small table in a beautiful rustic room and spoke in a low voice while our hostess was busily cooking in the kitchen next door. There was no menu, we’d go with the flow. Her cooking skills happened to be less impressive than the old house but we were hungry and ate gratefully.

Maps out on the table, we discussed the next leg of our journey. We were to drive down, pushing on further south towards Cape Town but eventually taking a sharp turn to the west and the coast. Our research had revealed a campsite in the fishing town of Lamberts Bay and we were aiming for it.

The following morning saw us back on N7, in familiar territory. The N7 isn’t particularly pleasant to drive on because it is a major artery with only a single lane in each direction. People drive fast and not always very well. The speed limit is that of a highway, 120 km/h.

A very strange habit of South African drivers makes then pull over to the side of the road at their current driving speed to let faster vehicles pass them. It’s a surprisingly polite yet incredibly stupid practice that puts a great deal of pressure on everyone while still possibly allowing for traffic to flow smoother. The slower cars being passed end up dangerously close to the ditch, on uneven surfaces, putting their tires and pedestrians at great risk. Passing cars must still dodge to the right and cut into the opposite lane a bit, which results in vehicles often crossing each other at very close range and relative speeds of up to 250 km/h.

I was happy to leave N7 behind and head towards the ocean.

The campground at Lambert’s Bay, however, was a bit of a shock. Coming from the remote northern areas and arriving on the coast was like suddenly being thrown back into the real ugly world with no transition. Nested right against the beach, the compound was surrounded by a high electric fence and serious barbed wire, giving the place the look of a concentration camp. The fence was very old and in poor condition but its purpose worried us.

I went back to the office and asked bluntly if crime was that much of an issue. “Not really,” the woman answered, “but we did have a problem in December, some stuff was stolen.” I was puzzled by her answer. I had wanted to be reassured and couldn’t understand how she could have admitted to that – it went against every ounce of business instinct I had. I looked around me. Individual sites were dirty, smelly and very few had a water tap. The ablutions block was the creepiest I’d seen. We reluctantly began to pitch the tent in a strong sea breeze that threatened to relocate it unexpectedly.

Marie wasn’t feeling very good. Suddenly, camping was not looking so appealing. “The hell with this,” I said eventually. I jumped in the car leaving Marie behind to recover and drove to a B&B we’d noticed nearby. They had a room, more expensive than camping, but clean. Big. Pretty. Comfortable. Private. And safe. I went

The reason for coming to this strange town had been simple: we’d made a reservation for dinner at a one-of-a-kind open air seafood restaurant called Muisbosskerm. In the evening, Marie was feeling stronger and we drove there taking along a bottle of chilled Prosecco – the little fridge still doing wonders for our moral comfort. Muisbosskerm was isolated on its own, far out of town on a dirt road along the coast. There were no

concrete walls nor ceilings. The place was partitioned with what looked like thatch walls. A single narrow door led inside the enclosure where some seating space was arranged around large open air grills, fires and tables. Steps led down to a cement veranda right over the beach.

The concept was simple.

Food was cooked in front of us on the many braais and grills, in successive waves of varying dishes. It was then placed on the tables in a buffet fashion for people to come and help themselves repeatedly. There was a huge variety of local fish, seafood, some bizarre meat dishes, an amazing freshly baked bread and it all looked delicious, if quite unconventional. We sat on the veranda despite the wind and watched the sun set while we ate and drank Prosecco, our sweaters zipped up high and cheeks chilling. Dinner was supposed to last 3 hours but after a little over one, we were feeling full and content. We had coffee behind the protective

walls, away from the wind, and drove to bed.

The night was good but we couldn’t get out of Lambert’s Bay fast enough in the morning. It would remain a nasty stain on our trip memories. Our next stop was the Cape Columbine Nature Reserve, further south on the coast. The reserve was supposed to have many small campsites and we hoped to make up for the previous night’s failure. It was a brief drive away, on a road strangely sprinkled with

tortoises which we had to avoid like as many landmines.

When we reached the reserve, a kilometer or so outside of Paternoster, a thick fog bank had rolled in from the sea and limited visibility to a few hundred meters. We passed a gate and explained we would “just have a look at campsites”, not taking any chances this time. But soon, we knew we were going to stay. The first campsite we drove to on a narrow sand path, was isolated, private and right on a pebble beach framed by high granite boulders. It was lovely.

It was barely noon, this had been our shortest driving day of the trip. Unknown to us though, it was also going to be the longest night…