With a longer commute to Harlem, I find myself arriving home later than I am used to and often having run out of steam. Since steam doesn’t do me any good and an after-commute jog has become less practical than it was in Brooklyn where I was one subway stop away, I recently tested a simple run home from work.

The run I wanted to test was simple. I work right down at the bottom of Manhattan, a half-a-block away from Wall Street. Yes, I am surrounded daily by bankers and traders. Oh well, it’s not entirely their fault. They are victims of the system.

So I would run home along the East River, leaving finance behind and crawling into relative poverty. Relative, I say, because it seems that in modern America, the richest and the poorest drive the same vehicles: huge, fuel-hungry, chrome-plated, tinted windows-equipped black or white SUV’s.

The problem about that run is, and I had experienced this on an infamous long run that was my first unofficial marathon, that the East River path is not smooth sailing. There are interruptions to the bicycle and pedestrian paths that end up being quite a nuisance.

I started the run a bit late, around maybe five o’clock, having walked fast to the South Street Seaport to warm up. A point-and-shoot camera, ID, money, subway pass and phone were in pouches on a belt. I hate wearing a belt while running. Whether it is water or stuff, it bounces up and down and distracts me so much I swear every time I will never carry it again. And yet I do, out of necessity.

The run had been plotted to be around fifteen kilometers, which is roughly one-and-a-half times my usual run, no sweat. But with the recent move to Harlem and huge impact some one-hundred-and-twenty floors climbed up and down had had on my knees, running had been sporadic at best lately and I had lost my rhythm. I started slow. I always do.

The starting point was the South Street Seaport. I ran northeast along the East River, the FDR highway casting its loud shadow over my GPS like a cloak. The Brooklyn Bridge was passed, then the Manhattan Bridge. They are much closer together on the other side and when watching from Manhattan, perspective seems to play tricks with one’s mind.

Further up was the Williamsburg Bridge. A long straight shot and the river seemed to curve left along huge projects. I was in Midtown. Around 35th Street, I had to abandon the waterfront and cut inland to detour around the United Nations, the tall and slick slab of diplomatic immunity standing proof that freedom comes at an urban cost. 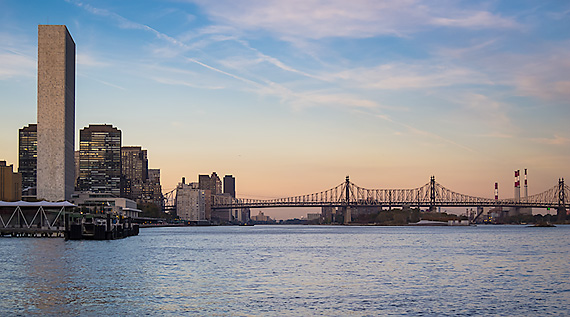 United Nations and the Queensborough Bridge

I rejoined the East River path around 61st Street past the Queensborough Bridge, having lost most rhythm and some patience. I really hate running through traffic and lights.

Roosevelt Island stretched to my right in the middle of the river. I passed below the Rockefeller University and its strange stone walls, still taking bad pictures now and then. I would never stop for more than 15 to 30 seconds for a photo. That did prove tiresome though, because while each stop let me catch my breath, it also allowed the legs to fall out of sync and by mid-run, heartbeat had not even awaken but all joints were beginning to complain. They are like our cat, they need routine and regularity.

Around 70th or 80th Street, there was another interruption in the bicycle path and I got fed up. I decided to cut across to Central Park. I hit every single traffic light wrong and by the time I had reached the park, energy depleted by the multiple interruptions, knees in agony and darkness upon the city, I was seriously wishing I was home. That’s a bit embarrassing with five kilometers to go. 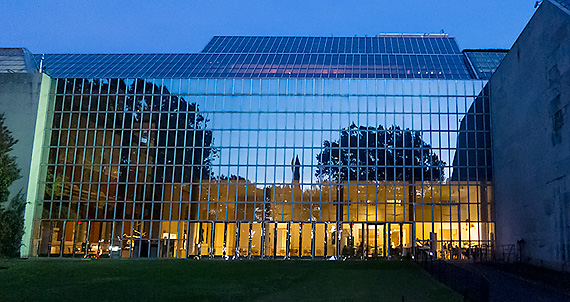 I finished slow. I rarely do. Normally, the end of the run is a moderate sprint. This time it was a crawl, even with the multiple traffic and photo stops.

Joining the main road inside the park, I followed it counterclockwise along with a few cyclists and runners. Central Park at night loses its depth and becomes simple dashes of street lights, linked together by paths and roads like pearls on a string. The ice rink at the north end was open and people played hockey.

Finally, I ran up Lenox Avenue to 125th and stopped. I would not have gone any further that night. There will be better runs. The pictures are bad too, blurred by light panting and a bullet-proof high ISO.

But it was my first run home to Harlem.

It’s not that I’m all that stubborn.
It’s not that I’m even all that crazy about running.
If I totaled all the miles I’ve ever run, half were aching drudgery.
[But] There’s something so universal about that sensation, the way running unites our two most primal impulses: fear and pleasure.