Slingshot to Kruger, Part 1 – Snow in the Karoo

I am writing this from New York City, the Big Apple, eight million souls, fifty million visitors a year, four hundred and sixty-eight subway stations, thirteen thousand yellow cabs, on a hot and humid summer day with a thirty-seven degrees Celsius signature (98°F). My head is still spinning from the trip, daydreams powerfully controlling reality, dampening the heat, distilling flower scents from raw smells and muffling sirens and horns until they chirp like happy birds. It has been a month, two hemispheres, thirty-five hours airborne, five thousand kilometers (3,100 mi) on the road and four thousand pictures since my last confession.

But I must admit it now: I have sinned. It was greed. I thought, for a while, that I could bring it all back with me. The beauty, the immensity, vast open spaces, the wildlife, flowers, oceans, time to play and enjoy life, sublime food, magical light, silent nights, beautiful people. 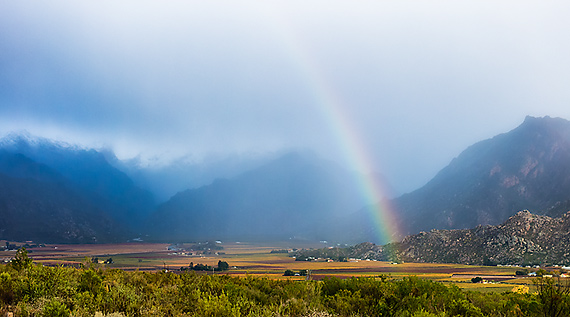 I was wrong. The beauty we admire most, the moments that last the longest, are the ones we cannot take home. They stay where they are and we go our own way, leaving a bit of ourselves behind and packing our share of memories in return. And then we spend invaluable time remembering, imagining, reliving. Planning, even, as we always want more.

And if we happen to be inclined to storytelling, we pull up a chair, gather an audience and attempt the impossible: alchemy, the philosopher’s stone. Turning complex memories into words, into elaborate stories. Raw images into pretty pictures. Bringing the past back to life through our subjective vision of it.

Most of the time success, if found, is brief. The worlds that live eternally inside our mind will be fleeting once painted for others, unless we are a Michelangelo or a Tolkien. But maybe that’s enough. Being remembered would be nice but I do write and photograph for the sheer pleasure of it, almost selfishly, for what it does to me, inside. So here we go. I give you a Slingshot to Kruger.

As I was mentioning recently, it had been two-and-a-half years since I had enjoyed more than seven days off. Marie was also in dire need of a vacation. We had weighed our options carefully, a map of Southern Africa at the ready. Our first Southern Hemisphere expedition having been to Namibia’s Namib Desert and the Kgalagadi Transfrontier Park and the second through the Mountain Kingdom of Lesotho, how could we top those? Hesitantly, Marie had suggested the Kruger Park. It was a long shot.

She had stared at the map some more, measured distances, plotted possible routes, analyzed what we could find out of road conditions, investigated costs and supplies, and sought a confirmation of transport availability – the graciously offered Landcruiser. We had calculated inwardly and then out loud what our chances of success could be. Near perfect, we decided, if the vehicle held, and it always had. We committed.

The Kruger is part of the Great Limpopo Transfrontier Park, a peace park which straddles the northeastern border of South Africa into Zimbabwe and Mozambique. The Kruger section covers 19,633 square kilometers (7,580 sq mi). Its subtropical climate and several decent size rivers make it a malarial area. It is home to the Big Five, as well as over 140 species of mammals and 500 species of birds.

Despite its remote location, the park is not nearly as isolated as Sossusvlei or the Maluti Mountains had been, however. It is quite accessible from Johannesburg and we knew we could expect the occasional mob. But such is the price to pay visiting one of the most famous parks in Africa.

The trip would lead us through the entire height of the country from Cape Town in the southwest to the very northeast corner. We decided to split the 1,900 km drive into three legs to allow for the unexpected and let us stretch said legs every few hours without too much impact on arrival. We would follow the N1 all the way to Gauteng, the nation’s political and economic center, where Johannesburg, Pretoria – and Soweto – are located, sleeping in Bloemfontein along the way.

Crossing the hot zone the second day, we would turn east and head towards the province of Mpumalanga, sleeping in the small town of Dullstroom. The third day would mark our arrival in the park, where we would spend 10 nights before heading back. It was meant to be a slingshot maneuver: travel far and fast, get there, gather energy and come back even faster.

Waterfalls are a rare thing in the Western Cape

We left Cape Town on May 29 in the morning. Departure had been planned for 6 a.m. but an unexpected power failure slowed us down as we prepared breakfast for the road while trying to restore power for Marie’s parents. The trusted Landcruiser was fully loaded – we do not travel light. There were only three camping nights on our schedule, the rest being spent in park bungalows, but they required a lot of gear: tent, sleeping bags for the chilly winter nights, mattress, pillows, chairs, etc.

Driving the Landcruiser is a love affair. The V8 Turbo Diesel, an imported 80 series, is 17 years and 104,000 km old (64,600 mi), but it is in impeccable shape. We affectionately call it Mogashagasha, Selina’s Sesotho nickname for “She who goes over everything“.

This was déjà-vu. We negotiated early rush hour traffic through the suburbs and joined the N1 which is a proper, limited-access highway in the vicinity of cities. In the wild, it becomes a two-way road of varying width. It has much improved and is well paved but remains a heavy traffic, high-accident artery through the country.

At times featuring a single lane in each direction, the N1 has been enlarged with many passing zones where one direction is given an extra lane. Regardless, the speed limit being 120 km/h most of the way and South Africans driving quite fast, it is common to meet oncoming traffic at a relative speed of over 240 km/h (150 mi/h), with a mere couple of meters separating both cars over the center lane. Faith, then, is in order. And unrelenting concentration.

The city left behind, we drove abeam Stellenbosch, in the heart of the wine region, and past Paarl which can be simmering hot in summertime. But it was winter, and with temperatures hovering at night just a bit above freezing, the abundant rain of the coast had sprinkled a dusting of snow over the higher mountains of the Cape Fold Belt. White tops in the distance hypnotized us and as the peaks grew closer, we realized our timing was impeccably lucky.

The weather was moody and wet. Low convoluted clouds broke up to let a rare ray of sunshine warm the ground here and there. The road eventually climbed higher through the Hex River Mountains and snow appeared at the top of a ridge next to us, very close now, while the bottom of the narrow Hex River Valley was lined with colorful vineyards. Snow-covered cliffs melted into the white-out sky. Fields of red and gold seemed to lay a carpet for us to follow.

I had to mentally pinch myself to make sure I was not dreaming. This was not the Africa I knew, or thought I knew. The snowy range looked like the Dolomites. The vineyards reminded me of Bourgogne. The temperature was that of Vancouver. Nothing around me, other than the occasional glimpse of extreme poverty, remained to anchor the scenery to reality. This was a different place, on the way from here to there, an exception, a parenthesis.

Once we had driven through the mountains, dryness returned and desolation soon settled in; the road stretched far, far ahead. Kilometers ticked and diesel burned.

We crossed the Karoo, stopping some 70 km after Beaufort West in a small place called Three Sisters to buy boerewors and lamb chops, at a farm stall that had been praised as the best meat above the “boerewors curtain”. We stocked up for days of braaing. As it happens, the curtain does not refer to meat quality but rather to a hypothetical line between Afrikaans and English speaking South African regions. 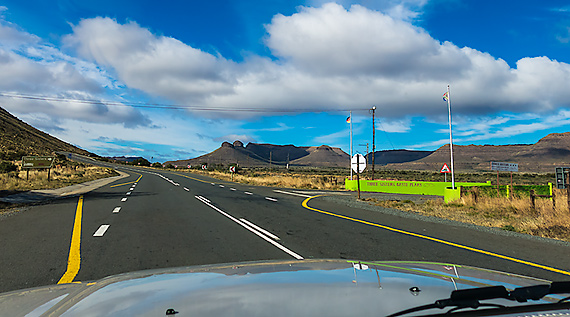 The Three Sisters, in the background

I had brought my Android tablet along to use it as an offline GPS with the Sygic app. The app turned out to be a pain in the neck, visually pleasing but systematically overestimating travel time and giving us ETA’s 25 to 50 percent later than our best guess calculations. However we eventually realized that due to our driving style and frequent photo stops, stretching breaks and the like, we ended up actually arriving to our destinations around the time the app had predicted. Late but happy and safe.

Later in the afternoon, we crossed our old friend the Orange River, marking our entry in the Free State. Bloemfontein is a little over 1,000 km from Cape Town. The drive took us about 11 hours. As the evening fell and we approached the city, we were awarded a stunning sunset through vast dusty fields, the light golden and the sky progressively turning all shades of pink and purple. Unfortunately, we were eager to arrive and check into our hotel and did not stop for pictures. Marie has a very nice shot of it here.

Of Bloemfontein, Marie’s birthplace, we saw very little. Darkness had fallen and we circumnavigated a quarter of the city on a bypass highway, cut straight-in on Nelson Mandela Drive, an American suburb-looking street complete with hotels, shops and a mall, found our own hotel and put an end to the day’s drive. The air was cold, not too far above freezing and people wore coats.

It had been a long day and we opted for the in-house bistro at my request, had a quick dinner in its lounge and retired to our room to rest. The receptionist had explained with pride that the room featured a sliding partition that allowed to watch TV from the bath. “Oh, we don’t watch TV,” Marie had said. “You will tonight,” she had replied with a certain smile.

We did not. We were Kruger-bound and civilization had already recessed in our hearts to the status of mere annoyance. Soon, we would be cooking on a braai with elephants and hyenas roaming within a stone’s throw. Once again, the adventure had begun.