Finding the mega lion pride comes at a price and a phone app interferes with Chance
Fauna, Kruger Trip, Stories

Olifants was revisited with intimate pleasure. Our new rondavel had an even better view than the previous. Hippos were on station down below, loud and comical. Birds and mongooses were also on cue. We managed to change our following booking from Letaba to Satara where we would now stay three days. Then we drove around, came back and braaied our dinner by candlelight and river music, and slept like babies.

Sunset over the Kruger Park

In the morning, we packed up with renewed excitement. The scenery was going to change back to a more open savanna, mopane soon to be but a strange memory. We left the Olifants River behind and savored a flattening of the landscape as once again, we could see to the east as far as a ridge that marked the border with Mozambique. There were many more giraffes, elephants and crocs. There were funny baboon teenagers learning to tree-climb. There were rare ground hornbills that walked up to the Landcruiser and attacked our bumper with their beak, probably bothered by their own reflection. 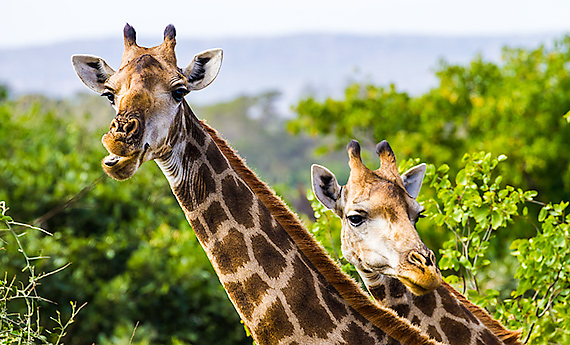 My first task when I got out of the Landcruiser at Satara was to look at sighting reports posted by the reception desk. Sighting boards are present in each Kruger camp. They feature two panels with an area map, one for the current day and one for the previous. An animal legend on the side is color-coded and magnetic pins allow people to mark sighting spots for given species when they come back to camp. Every day, park staff rotate the panels, Today becoming Yesterday and the new Today being wiped clean.

Lions are red, leopards black and cheetahs white. There are also colors for other animals such as elephants, buffaloes and giraffes. Rhino location reporting is no longer tolerated in the park due to the intense poaching crisis. 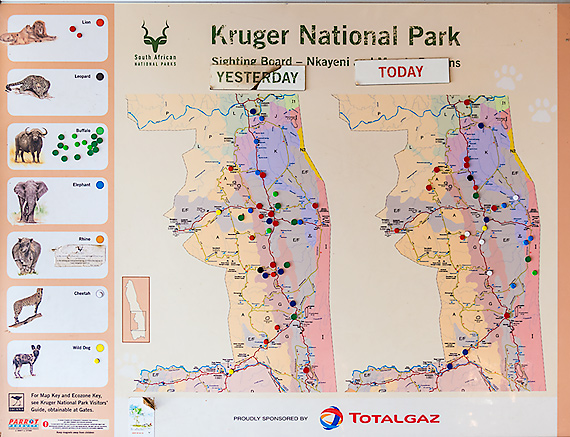 The sighting board, Satara

There were multiple red dots spread out around the camp for the previous day, proof that Satara could live up to its lion country reputation. The nearby S100 dirt road was actually said to be the most famous hangout in the entire park, home to a mega pride of over 20 lions. It was also said to literally become a dust ball at dawn and dusk when visitors converge from all directions. That, the rumor said, was a consequence of the app.

In 2012, a geeky teen created a phone app he called Kruger Park Sightings. It uses crowd sourcing to report Kruger game sightings in real time, by tagging the location with GPS coordinates on a map. The app has become the talk of the moment as it radically affects not only one’s chances of seeing what they are after, but the entire park experience. Neither Marie nor I had, or wanted, the app – and we could not have used it any way, our phones being data-less in South Africa. But we wondered how this game-changing – pardon the pun – new variable would affect our lives.

We were about to find out brutally.

Having checked in, we drove through camp in a funny eight pattern around large circles of bungalows. Each circle was about 100 meters in diameter and was lined with evenly spaced out units on its periphery, the center being nothing but grass and a few trees. Our first impression was a dull one as there was no view of the outside and sitting on the porch, one was looking at the circle of identical bungalows. It however turned out to be a rather ingenuous design. The noise and lack of privacy we had feared were never a problem, and watching all the braais and fires progressively lit up at night was a touching proof that society could work if people were united by common interests and taught respect of the environment and one another.

Once settled in, we readied for our afternoon drive, deciding to aim for an area not too far east where lions had been reported the previous day on the board. Out the gate, a surprisingly high traffic flow accompanied us and we wondered if the infamous app was at work. Some cars were actually passing us at or above the tar road speed limit of 40 km/h as if rushing somewhere. We took our time, annoyed by the speeders, but eventually as I was scanning the bushes to my right, I heard Marie say a laconic “Uh-oh.” My head snapped back forward. Some distance ahead, a bunch of cars were piled up across the road.

We immediately knew what it meant. Lions. 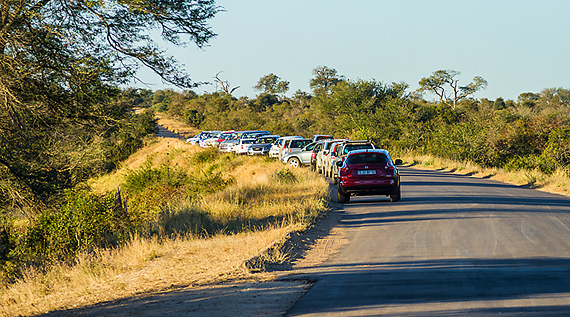 Marie and I had learned, back in the Kgalagadi, that such traffic jams invariably mean that something very cool has been spotted. Most visitors being photographers and some taking it quite seriously, they will stop at bizarre angles to get a clean shot, and jungle law prevails among drivers. We had also become experts at assessing the location of the animal getting so much attention by analyzing the general direction in which heads and telephoto lenses were turned.

As we approached, we discovered that the cars had parked next to a pond and all eyes were trained on the opposite shore. With a mixture of disdain, repulsion and fascination, we stopped at the back of the queue as cleanly as we could and began scanning the scenery. Not spotting anything, we moved forward while cars were leaving or re-positioning, and eventually, after much squinting, we indeed found the lions. They were resting behind thick bushes straight across from us, quite far and hard to see. Two lionesses came closer to the water and were challenged by a hippo that emerged and walked out towards them. They did not care for a fight and pulled back.

Annoyed by the crowd, we drove on to see if we could find a better angle on the side of the pond where a dirt road seemed to cut in, but as we proceeded, the number of cars heading back our way confirmed what we had feared: there was no clear view. Eventually, darkness falling slowly, we came back to the line of cars from the opposite direction, settled in an empty spot, and decided to wait and see. As the sun’s very last rays shone on the bush, orange hues lighting narrow spots like as many candles, the entire pride rose and moved lazily towards the water, at a angle that finally brought them in full view and much closer to us.

At last, a lion pride

There were many females and possibly younger males, hard to tell apart. But there could have been no doubt on who the male was. He came out last, his mane dark and thick, and chose an isolated drinking spot for himself. We sure got our money’s worth.

By now the traffic jam was spectacularly anarchic. There was something intrinsically wrong with the picture. Being there was like visiting a zoo, despite the openness of the park, the randomness of such a sight and the reality of the danger that surrounded us. The intimacy one would hope for when interacting with nature was lacking. Despite our best intentions and respectful manners, we felt like tourists on a ride. I wondered how many people in those cars were leaning on their cell phone, punching in the event’s details rather than actually watching it unfold.

The night was upon us and as the gate closing time approached, we decided to leave before the masses woke up and jammed our road in an impossible retreat effort. As we drove back slowly, scanning around us out of sheer habit, we discussed the experience and what it meant for the park, and for the lions. There was no doubt in our heads that the app was responsible for the number of vehicles hitting that location. In a way, what the app was achieving now was no different from what sighting boards had done for decades. But it did it with the utmost accuracy and with zero delay.

The app basically herds the flow of game watchers around the park, like pieces moved on a monopoly board, with bonuses for speed and penalties for poor navigation. The internet has gained control on what had long been a matter of luck and experience, and now provides the most clueless of visitors with evened odds of success. Processions of vehicles will be migrating between key spots at high velocity, in an endless, graceless ballet, the human herd continuously losing and adding members, its momentum unfazed.

Will this be affecting the animals? All species in the park must to some extent be used to the presence of humans. But until now, they could distance themselves easily and would be found only at random or by the few who had enough knowledge to track and anticipate their behavior. The app is going to make solitude much harder to achieve for any of the high interest species. The lion pride we had just seen will now, as long as they are within sight of a road or camp, have a flock of cars buzzing around them all day, thanks to the relentless reporting of their presence.

We have entered an age of absolute technology. Even when it comes to wildlife, luck will no longer be considered tolerable. It’s now up to a piece of software to guide ignorance.

I would not be surprised if within a decade, opportunistic businesses arise who will rent you a lion-seeking drone for the weekend, complete with instructions manual and a variety of preloaded search patterns. Imagine the slogan:

“Send your drone out looking for your favorite animals while you get up late and have breakfast. We’ll save you time and disappointment doing all the hard work for you. Use our exclusive award-winning search algorithms: Lion Frenzy, Lazy Eight, Rhino Seeker, Kill (horn)Bill, Mega Game Pack, Race Track, Elephant Cull. Plus, for a limited time and an extra fee, you can get the Premium Stealth version that scrambles the signal of nearby drones and transmits your results back to you with 256-bit encryption. Call now! 1-800-U-LOSERS.”

Shame. The lions will still be lashing their tails at all the new buzzing flies, but they can never shake the suckers loose.

Note: If you think I’m exaggerating with my drone theory, think again. As you read this, drones are being used over the very Kruger Park in the war against rhino poaching. I’ll write more about that in the next post.

Then if you want to see what they actually look like, check out this site, kindly provided by cinematographer George Billard.

And last but not least, if you still have doubts you can read about it from no other than NatGeo photographer Michael Nichols who photographed Serengeti lions using drones and robots.